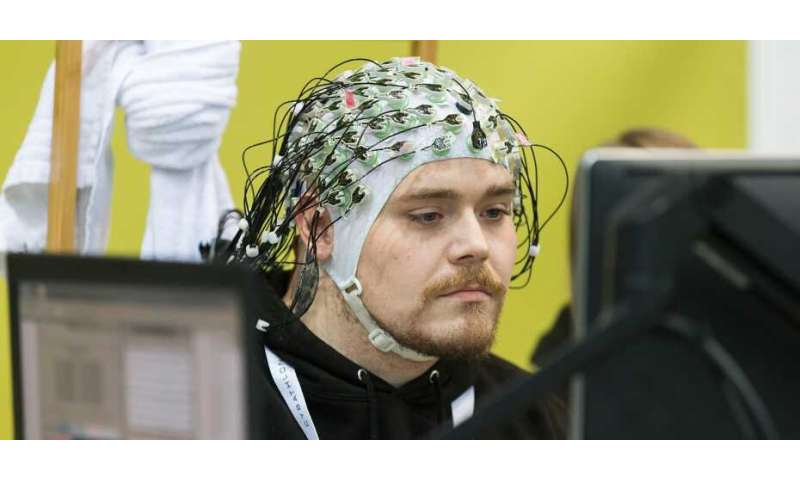 It will still be a long time before brain-computer interfaces are able to read thoughts. And many limitations need to be considered, according to Roger Gassert.

Brain-computer interfaces (BCIs) allow people with severe physical or speech disabilities to interact and communicate with their surroundings using their thoughts interpreted by a computer. Elon Musk’s Neuralink recently presented the company’s plans for using innovative “threads”—ultrathin flexible electrodes that could be implanted in the cerebral cortex to connect people with the digital world.

Research has already produced impressive results over the past decades: in several studies, finger-sized neural interfaces incorporating a hundred minute electrodes were implanted in the cerebral cortex of persons with tetraplegia. This interface allowed these people to control a robotic arm to perform reach and grasp movements, by thinking of moving their own, paralysed, limb. In another ground-breaking study, persons in a completely locked-in state were able to answer questions with “yes” or “no” responses. In this case, functional near infrared spectroscopy was used as a non-invasive means to measure oxygenation changes in the blood, and the results analysed with the help of a machine learning algorithm. People in the completely locked-in state are unable to move their muscles voluntarily, so they have no other means of expressing themselves.

Only a few basic everyday uses at present

However, such spectacular announcements and research stories cannot mask the fact that BCI technology as a whole is still very much in its infancy. BCIs are very rarely encountered in everyday life, if at all—even in people with a severe physical disability. The only application that I am aware of is where persons with severe physical disability operate a spelling device, either as a supplement to their usual device controlled by eye movements (which can be tiring over long periods) or in cases where full paralysis is causing a completely locked-in state and they are unable to control their eye muscles.

There are many reasons for the limited transfer of BCIs into routine applications. Invasive BCI systems with implanted electrodes, for example, require neurosurgery, carry the risk of infection and the signal quality of the electrodes currently used deteriorates over the months. This type of intervention is therefore only justified in cases of severe chronic disability, and thus far only available in the context of research studies.

Although non-invasive BCI systems are much safer and more common, they also have many weaknesses: their signal quality is much worse than when electrodes are implanted by surgery, as the distance to the brain is greater. In addition, movements of the forehead, eye or neck muscles can interfere with the signal. Even with well-trained users, BCIs only interpret simple commands correctly in 60 to 90 percent of cases. This is insufficient for uses where safety is critical, such as controlling an electric wheelchair. Using EEG-BCI technology to issue commands also requires a relatively high cognitive effort from users, and around a fifth of subjects do not manage to control the brain-computer interface reliably. This is referred to as BCI illiteracy.

One also needs to consider the following: BCIs are not capable of “mind reading,” not now nor in the foreseeable future. BCI systems recognise neuronal activity patterns generated by certain thoughts or cognitive tasks. Generating commands by thoughts, however, is not the same as “mind reading.”

Nevertheless, we already need to consider the moral and ethical implications that could become more critical in future—especially privacy and the ability to think and act freely. We keep many of our thoughts to ourselves and do not vocalise them or translate them into action. Who would be responsible if a BCI enacts a malicious thought that was never meant to be acted upon? It is also imaginable that thoughts could be manipulated externally, as soon as they are digitally processed (“brain hacking”). And if in future it indeed becomes possible for BCIs to read out thoughts in real time and combine them with artificial intelligence, BCI users could acquire superhuman abilities that could lead to social imbalances.

It is up to both researchers and the media to clearly highlight not only the possibilities, but also the limitations and ethical consequences of BCIs. In the case of scientific studies on this technology, the methods used need to be better documented, the data sets made publicly available, and the limitations communicated more effectively. At present, BCIs are often still treated like a black box, and even experts sometimes have difficulty interpreting the results of the studies.

This also became evident when analyzing the results of the BCI race at CYBATHLON 2016 in Zurich. It was not possible to determine the exact reasons for the successful performance of the winning teams6. The ground-breaking study mentioned earlier, where persons in the completely locked-in state were helped to communicate, is another example: other scientists were unable to replicate the study, and so it was called into question publicly. Had the study been better documented, this problem may not have arisen.

Potential in research and therapy

Despite these challenges, BCIs are important research tools. They make it possible to learn more about the function and organisation of the brain, for example the way it reorganises after a stroke. In addition, several studies in recent years have shown that BCI-controlled therapy systems can support recovery in stroke patients with severe paralysis.