Canola oil represents an oil extracted from rapeseed – a variety of oilseed (Brassica napus) belonging to the Brassica family. It is grown in North America. The variety of seeds used for this purpose is a cultivar specially bred to drastically reduce the percentage of toxic erucic acid and glucosinolates to less than 2% (down from the original 40%) and 30 µmol/g respectively – hence the name canola (Canadian oil, low acid). Any rapeseed oil with less than 5% erucic acid is not called canola oil but LEAR (low erucic acid rapeseed) oil. 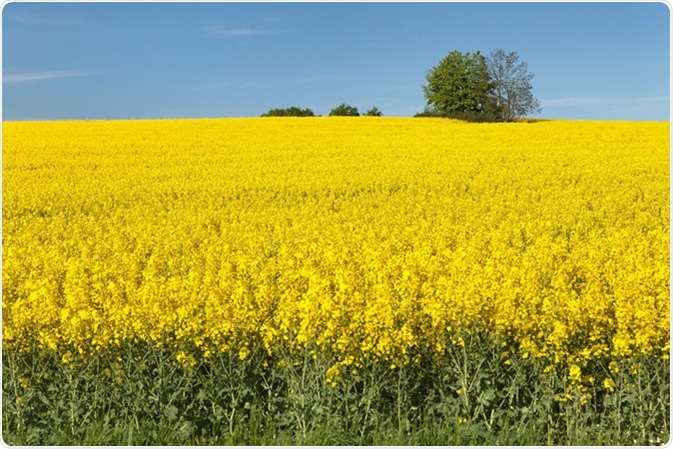 Canola oil has been heavily marketed as the healthiest vegetable oil for cooking, as well as for raw use as in salad dressings. As a result, it is among the oils ranking highest on the consumption list in North America and Europe, and the volume sold is the third largest in the world. Its low saturated fat content has led to its adoption as a safe substitute for shortening and butter in many diets. 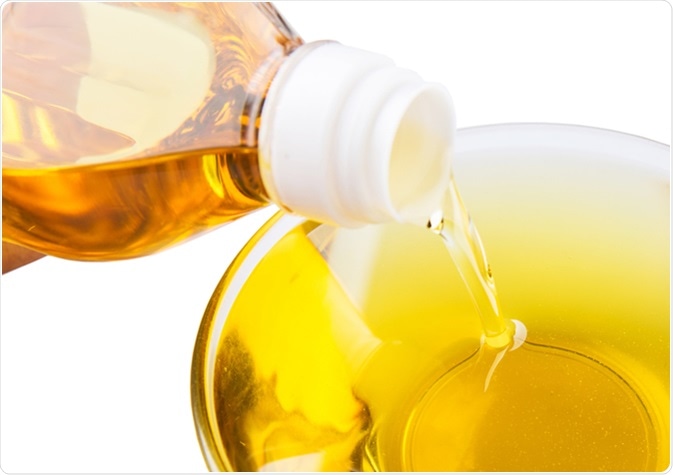 The healthy diet is supposed to have only 30% of its total calories from fat, with the total saturated fat below 10%, and 8-10% contributed by PUFA. The ratio of linoleic (an omega-6 polyunsaturated fatty acid (PUFA) and linolenic (an omega-3 PUFA) acid is recommended to be between 4:1 and 10:1.

Linoleic acid supplementation in place of saturated fat in the diet reduces total and LDL cholesterol levels, as well as reducing cardiovascular disease risk. Thus, canola oil does not singlehandedly meet the above criteria for a healthy oil.

However, the use of canola oil is reported by several researchers to be beneficial for the heart and cardiovascular system in general, because of the high MUFA content. This helps with the following outcomes:

The claim in favor of canola oil is supported by the fact thata decrease in total cholesterol and LDL cholesterol are validated biomarkers for cardiovascular disease. Recent research and reviews are equivocal on this issue, however, with no conclusive evidence for canola oil offering such a clinically protective effect over other MUFA-rich oils.

Other researchers have suggested that canola oil, when substituted for saturated fats, also acts to improve health through other mechanisms. These include a reduction in cancer incidence and inflammation, and improved energy metabolismin the form of lower fat deposition, early satiety, and reduced eating.

These suggestions are also not backed by clear proof, with studies presenting evidence both for and against the hypothesis. Much more work would seem to be needed to claim a superiority for canola oil as a source of dietary fat in preference to other vegetable oils or even saturated animal fats.

On the other hand, it is indisputable that potentially toxic chemicals such as hexane are used to extract oil under high heat conditions from rapeseed kernels. This may lead to:

This oil, like other refined vegetable oils, is also subjected to bleaching, deodorization, refining, degumming and so on, to produce a bland odorless and tasteless oil. All these are capable of altering the nutritional profile of canola oil for the worse.
Organic and cold-pressed or expeller-pressed canola oil is preferable therefore to heat-processed hexane-extracted oil. Most North American canola oil is produced from genetically modified plants in contrast to European production which is from non-modified plants.

Canola oil is known to reduce total fats in the blood. However, a rodent study showed that canola oil ingestion by hypertensive rats in the absence of salt intake actually reduced antioxidant activity and pushed up cholesterol levels, thus increasing the risk of cardiovascular disease.

A dramatic reanalysis of a study performed 50 years ago also showed a striking lack of benefit in terms of cardiovascular death reduction when total and LDL-cholesterol levels were lowered by cutting down on saturated fat. This would point to the need for a conclusive linkage to be demonstrated between canola oil, low saturated fat levels and reduction in cardiovascular risk levels.