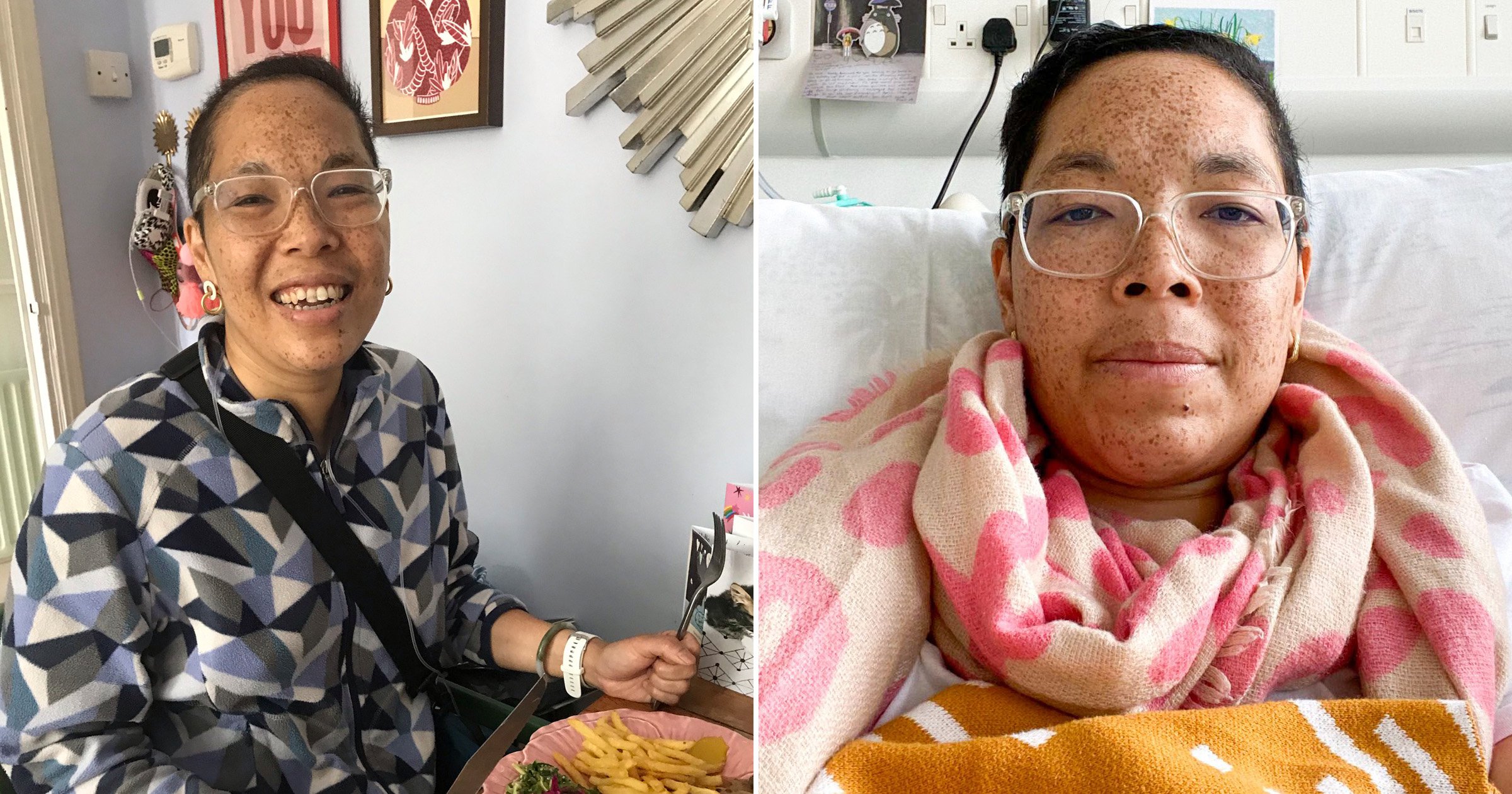 A woman who has been diagnosed with a deadly blood cancer at just 41 is struggling to find a stem cell donor that could save her life – because she is mixed-race.

Yvette Chin was diagnosed with acute lymphoblastic leukaemia, a rare aggressive blood cancer, in March 2021 – and the news came completely out of nowhere.

‘It was a steady decline over a six week period – that’s pretty quick, even for acute leukemia,’ Yvette tells Metro.co.uk.

‘When I look back and add up everything that I was feeling, it’s clear that there was something drastically wrong – especially given how active I am as a person.

‘I was really struggling.’

Yvette describes it almost like permanent altitude sickness. She was getting out of breath and exhausted simply walking down the street. She had heart palpitations at night and would wake up completely drenched in sweat. She couldn’t do her normal activities, and even her friends and colleagues started to suggest to her that maybe something wasn’t right.

She went to the doctor and had blood tests. Then she got a call telling her she had to go to A&E urgently because her blood counts were bad.

‘Obviously alarm bells were ringing, but even at that point I still never thought it would be cancer,’ says Yvette.

‘I had to stay overnight in hospital, which is a massive deal for me as I had never been in hospital overnight before. I had three blood transfusions one after another through the night. The day after next, they took me to surgery and that’s when they told me it was leukemia.’

Yvette was stunned. She had no frame of reference, with only one of her friends going through cancer in her 20s and no family history.

She was admitted to hospital immediately and stayed there for six weeks having initial rounds of chemotherapy to try to get her into remission. This didn’t work, so they tried an immunotherapy drug instead, but sadly Yvette relapsed again quite quickly.

The next course of action was a trial of a treatment that involved harvesting her white blood cells and genetically modifying them, which doctors hoped could be a cure for Yvette’s cancer. It worked for a while, but her cancer is incredibly aggressive.

‘The speed at which the leukemia came back was unprecedented,’ says Yvette. ‘The trials team have never seen anything like this – it just didn’t work. It was a big shock to everyone involved.’

Now, Yvette is running out of options. Finding a stem cell donor would be her best hope for survival – but it isn’t that simple, because of her ethnicity.

‘The only option that I’ve got left is to find a stem cells donor from an unrelated match,’ she explains. ‘Because unfortunately, my brother’s not a match and my parents are too old to donate.’

Yvette has Chinese and Jamaican heritage, which means that finding a donor to provide healthy new stem cells is proving difficult.

Donors are identified through genetic matching. Patients who need a donor are most likely to find a match from within their family, or where there is no family match (as in Yvette’s case), from someone with the same ethnicity.

White patients have a 70% chance of finding the best match from an unrelated donor. This drops to a 20% chance for patients from minority ethnic backgrounds. This is because of under-representation in donor registration.

‘The search has been on for a donor ever since I was diagnosed, but when you look at the stats, it isn’t surprising that I haven’t been able to find a match. Having Chinese heritage, and mixed heritage, these things all add to the layers of complications and make it less likely for me.’

Yvette says her cancer journey has been a ‘rollercoaster’ of emotions. The crushing disappointment each time a new treatment has failed to work has knocked her each time, and now this desperate search for a donor is a frightening prospect.

Yet she talks about her situation with such rationality and calm, even gratitude, which she credits the support of her friends and family for helping her achieve.

‘It is very up and down,’ she says. ‘The main thing I focus on is that I’ve had such a fulfilling 41 years. If the stars align, and I’m able to have my life extended, then all the better. In a way I know I am privileged to have the support that I do – even being able to share my story like this is amazing.’

The method by which you are asked to donate ultimately depends on what’s best for the patient and what their doctor decides after careful consideration. Wherever possible, your wishes will be taken into account, but ideally you would be willing to donate by either method. We will also cover the cost of the donation as well as any loss of earnings.

This is the most common method of stem cell removal, used in around 90 per cent of cases.

This involves the doctor placing a special intravenous line in each arm vein, much like giving blood. In the run-up to the procedure, donors are given a drug with the growth factor G-CSF for a period of five days.

Peripheral stem cell collection usually takes between three and five hours at the most, and donors can normally leave the collection clinic on the same day. Only very rarely is a second outpatient collection needed.

Bone marrow removal is used in about 10 percent of stem cell donations.

Stem cells are taken from the iliac crest (pelvis) in a certified collection clinic. The donor is placed under a general anaesthetic and about one litre of bone marrow-blood mixture is removed. That’s the equivalent of about five percent of the total bone marrow in the body and regenerates within a few weeks.

After the bone marrow has been removed, the donor may experience localised pain for a few days. This is caused by the wound and often feels like bruising.

Yvette says that having leukemia at her age is a strange experience, because it typically effects children or the elderly. She says walking into the hospital for treatment can feel quite isolating.

‘A lot of people in my age group will be fobbed off or struggle to get a diagnosis because we are not the typical demographic for this illness,’ she says. ‘And being in the minority like this has been quite a big mental hurdle.

‘I just want to appreciate the time that I do have, because none of us really know how much time we will have, do we?

‘I’m just trying to pass the time, while I’m here, in the most meaningful way I can.’

There is an urgent need for more people from ethnic minorities to sign up as stem cell donors.

DKMS, the world’s leading blood stem cell donor centre in the UK, says: ‘The percentage of all donors from minority ethnic backgrounds has remained steady at 13% in 2019/20, highlighting the importance of raising awareness of their lifesaving potential amongst this group.’

You can learn more about Yvette’s story and sign up to join the stem cell donor registry online here.