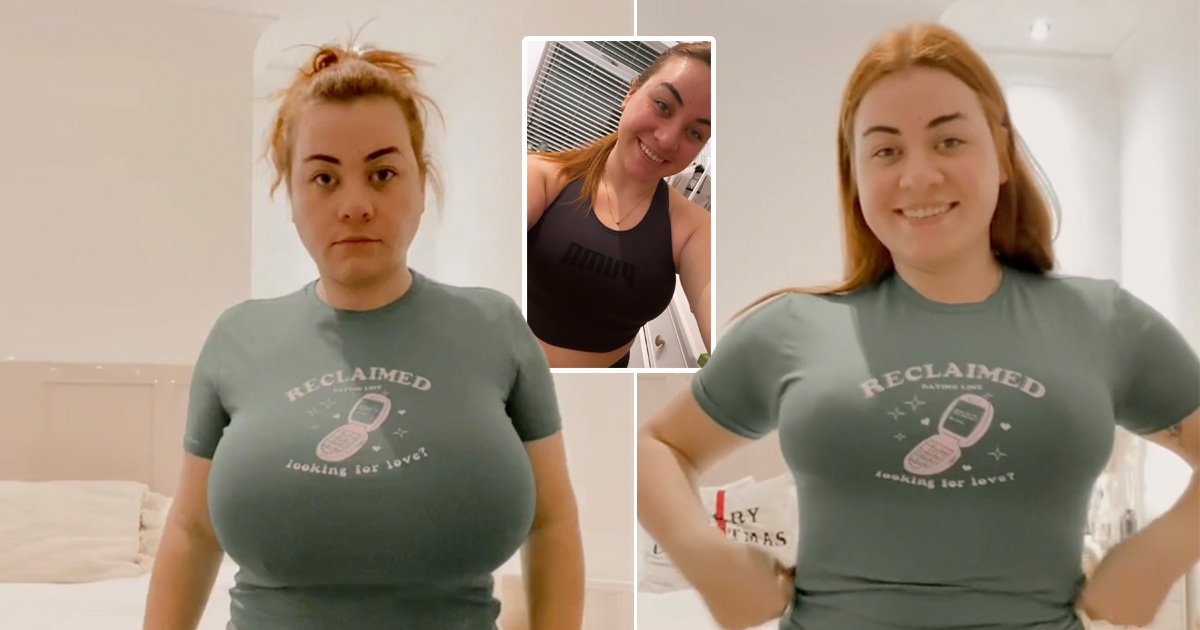 A woman who was turned down for breast reduction surgery by the NHS has had to pay thousands to get the procedure performed privately.

Toni Lewis’s heavy 34HH breasts caused her back pain and rashes so bad they would bleed.

Toni, from Newport, South Wales, was turned away from the NHS as her BMI classed her as ‘overweight’ despite the fact that she wore a size 8 at the time.

Toni, who now works as an administrator, said: ‘I suffered from terrible back pain and rashes that would bleed.

‘Even though I stopped growing as a teen, my boobs kept growing and getting heavier. Without a bra they were down to my belly button. It was demoralizing and made me depressed.

To view this video please enable JavaScript, and consider upgrading to a webbrowser thatsupports HTML5video

‘I couldn’t go bra shopping without crying. The lady in Marks & Spencers would tell me my bra size and I would burst into tears.

‘Bikini shopping was impossible. Wearing a button-up shirt was impossible as the buttons would pop open, or the shirt would gape open. It was not nice.

‘I was so self-conscious about my breasts. As a teenager, men would stare at my chest in public and some would make comments about them. It was so upsetting.

‘I grew up dancing from the age of three and trained in dancing at college. It was everything to me and I wanted to pursue it professionally. But I couldn’t get jobs as the dance costumes weren’t made to fit my chest size.

‘Over the last few years, exercise has become more and more difficult as I started having to wear multiple sports bras for a mild workout.’

Toni tried going to her GP to ask for a reduction when she was 19, but even though she was wearing size 8 clothing and in the best shape of her life, she was told she needed to lose weight to have the surgery.

Even after she went on to lose 10lbs, doctors told her no due to her weight a second time when she was 21 years old.

‘I was told that I was overweight and that I needed to lose two stone for the clinic to take me seriously,’ she said.

‘At that point, I honestly didn’t know where I could lose the weight from. It could have sent me down a bad road of eating disorders. It wasn’t nice at all.

‘My boobs weighed at least 10lbs and whenever I lost weight, nothing would come off my chest. It felt horrible and hopeless, and it sent me into a real depression.

When Toni lost both her grandparents, her mother suggested she use her inheritance money to pay for private surgery and, in December 2021, she got the breast reduction she’d wanted for so many years.

She said: ‘I sadly lost both my grandparents when my nan died of Covid in December 2020. I received an inheritance from them six months after.

‘As soon as I knew the money was coming, my mum said I should use it to pay for the breast reduction op privately. I found a surgeon in October last year and got the procedure in December.

‘Not once in the private process was I told that I need to lose weight.

‘I’m only eight weeks post-op, but I feel like things are looking up after this procedure. I honestly feel like a different person, and I’m over the moon.

‘I want to get back to dancing professionally and become the happier, healthier version of me.

‘I used to hide and slouch because my boobs were so heavy and big. But I’m so much more confident now.

‘Some people love their big boobs and that’s great but it caused me so much physical and emotional pain.

‘I wish the NHS would take into consideration how big boobs can impact a lot of women.

‘I also think the BMI system that the NHS use is extremely outdated. When I was a size 8, my BMI said I was obese which was ridiculous.

‘I’ve been making TikTok videos to help other women who are struggling with their breast size too.

‘I know more than anyone how it feels to be rejected for an operation that is often life-changing.’