Kip Wenger, DO, an emergency physician and systems medical director of Team Health, in Knoxville, Tennessee, was asked to see a patient in the emergency department (ED). He was shocked when he realized who the patient was — a 33-year-old female physician friend and colleague. 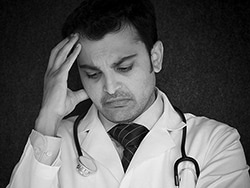 She was bleeding from multiple self-inflicted injuries and ultimately died. “I was devastated and couldn’t wrap my head around what had just happened,” Wenger told Medscape Medical News.

It’s important for physicians to be aware of warning signs in their colleagues, such as showing up late, being irritable and short-tempered with staff, missing shifts, making mistakes, or receiving an increasing number patient complaints, Wenger says.

Wenger had had dinner with her several weeks earlier and saw some subtle changes. He had known her as a “positive, upbeat person,” but her demeanor was different during dinner.

“There were no typical telltale signs — she was talking about her plans for the future, including buying a new bicycle — but she wasn’t herself and seemed to become tearful when I hugged her at the end of the evening,” he said. He later heard from another colleague that she had shared feeling “hopeless.”

The Scope of the Problem

Peter Yellowlees, MD, MBBS, professor of psychiatry, UC Davis, California, concurs, suggesting that some single-car accidents involving physicians might be suicides. Perry Lin, MD, assistant clinical professor, Heritage College of Osteopathic Medicine, Ohio University, and national co-chair of the Physician Suicide Awareness Committee of the American Association of Suicidology, says that says that some death certificates state that the deceased died of “accidental causes” because the physician who completes the certificate, possibly a colleague, is reluctant to list the actual cause of death to protect his colleague’s memory or the family’s feelings.

In general, and among physicians, White men older than 65 “represent the largest percentage of people who die from suicide nationwide,” says Lin.

But younger people are also susceptible, Lin adds. One of the most vulnerable periods for potential suicide is during the first few months of residency. This dovetails with findings of Medscape’s 2022 report Suicide: A Tragedy of the Profession. In that report, a difference was found between frequency of suicidal thoughts in younger physicians in comparison with older physicians (14% in those <35 years vs 8% for those ≥45 years).

“The best thing that can happen in our profession is upstream intervention — if people seek help before they get to the point of suicidality, recognizing they’re under stress and duress and that they might be going down a bad pathway,” says Lin. But research suggests that many physicians don’t do so.

Price, president of the Physicians Foundation, says his organization has identified barriers that prevent physicians from seeking help.

The major concern is that, in many states, licensing applications still ask whether the physician has been in treatment for a mental health condition. Physicians feel they may put their licensure at risk if they admit to receiving help for mental issues. These concerns were expressed by respondents in Medscape’s 2022 report, Suicide: A Tragedy of the Profession,many of whom didn’t seek treatment for depression, burnout, or suicidal thoughts lest it affect their professional standing when renewing their license or seeking credentialing.

Although organizations and societies are advocating against these questions, a recent study found that almost 70% of US states and territories continue to ask physicians about their mental health, and 28% ask for diagnoses (beyond current impairments) — a violation of the Americans With Disabilities Act.

“Mental health illness is different from mental health impairment,” Ryan Mire, MD, a Nashville, Tennessee–based internist, told Medscape. “As physicians, we’re comfortable with licensing boards asking whether the physician has any condition that might impair their care for patients, but not about a history of mental illness.”

The second barrier, says Price, is that hospital credentialing committees sometimes ask similar questions, as do commercial and malpractice insurers

Another roadblock is that in some states, undergoing treatment for a mental health problem could be subject to discovery by a plaintiff’s attorney in a malpractice case, even if the physician’s mental health history had no effect on patient care. But that’s uncommon, says Daniel Shapiro, PhD, author of Delivering Doctor Amelia, a book about his treatment of a suicidal physician who underwent a malpractice lawsuit. “I’ve never seen that happen.”

A final barrier is that many employers require employees to receive treatment within their own institution or health system. “Physicians may be reluctant to get help where they work, with colleagues and friends knowing about their illness or being involved with their care,” says Price.

In 2022, the American College of Physicians (ACP) issued a toolkit to help members encourage licensing and credentialing boards to remove questions about mental health on applications and include language that supports receiving treatment, Mire says.

There are few data regarding relative risk among particular races or ethnicities, “but we know racism is a social stressor,” says Mire. “Obviously, people from historically disadvantaged populations tend to have societal stressors like discrimination and racism that add an extra layer of burden.”

Intersectionality — having multiple intersecting risk factors — may confer even higher risk. “For example, if you’re a female physician from a historically marginalized race and a resident dealing with the ‘hidden curriculum’ of trying to be resilient, you have multiple layers of vulnerability.”

There are also limited data regarding which specialties or work environments are associated with highest risk. “Obviously, challenges exist in every segment of medicine and at different ages, stages, and work environments, and they intersect with each individual physician’s personal risk factors,” says Mire, president of the ACP and assistant clinical professor of clinical medical education, University of Tennessee Health Science Center.

Pamela Wible, MD, is an Oregon-based retired physician who herself went through a suicidal period about 11 years into her career that motivated her to embrace a new vision of clinical practice and change her practice model. After a series of physician suicides in her area, she began to speak and write openly about physician suicide, and since her retirement from clinical practice, she makes herself available on a full-time basis to distressed physicians. “When I address a conference of a particular medical specialty or a group in a particular geographical region, I focus on the specific vulnerabilities in that specialty or region,” she says.

What Increases the Chances of Suicide?

“Many factors, both within and outside the professional setting, affect someone’s decision to die by suicide — after all, physicians have the same stressors as other people, like family, finances, and their own health,” Mire says. When it comes to non–work-related factors, marital stressors and comorbid psychiatric illness particularly raise the risk, says Lin.

But certain drivers are specific to the practice of medicine, with burnout and depression first in line.

Shapiro, who is vice dean for faculty and administrative affairs, Penn State College of Medicine, in Hershey, Pennsylvania, and the Garner James Cline Professor of Medical Humanism, conducts burnout evaluations throughout the country. “Simple depression screeners prior to the pandemic showed about a 10% major depression rate in physicians,” he told Medscape. “Now, we’re seeing a 30% to 33% depression rate, even in those who weren’t frontline providers during the pandemic.”

Gary Price, MD, attending surgeon and clinical assistant professor of surgery, Yale–New Haven Hospital, Connecticut, agrees, noting that burnout in physicians has gone from 40% to 60% since the pandemic. But burnout doesn’t always lead to suicide. It’s when burnout progresses to depression, becomes more severe, and is untreated that the suicidal risk arises, he told Medscape.

Additionally, being a doctor isn’t “just a profession” but a “calling and identity,” says Gold. Job-related problems (eg, a malpractice suit, complaints to the medical board, loss of autonomy, changing work demands) can raise suicidal risk.

And job-related problems can inform the location of suicide, says Wible, who is the author of Physicians Suicide Letters — Answered. “A work-related catalyst makes it more likely that the person will attempt or complete suicide in the work setting. Physicians have stepped off hospital rooftops, shot or stabbed themselves in hospital parking lots, or hung themselves in hospital chapels. Perhaps it’s because they’re choosing to die in the place where they’ve been most wounded.”

You Are Not at Fault

“If you’re feeling suicidal, you might feel utterly alone, but if there’s one message I can give you, it’s that you’re not alone, and there are many things you can do to mitigate your pain and despair,” Wible says. “And you’re not defective. It’s the healthcare system that’s defective. You have nothing to be ashamed of.”

Some institutions have a “buddy system” that pairs clinicians to provide mutual peer support. A partner who notices concerning signs can refer the other partner for help. Physicians can also be paired with a “buddy,” even without a formal institutional structure. (See Resources That Can Prevent Suicide, below.)

A “buddy” is a step in the right direction, but Shapiro cautions it might be necessary to consult a trained professional for serious depression or suicidality. Several states provide connection to local resources. Employee assistance programs (EAPs) might be helpful, although many physicians don’t trust their institution’s EAP. Or physicians can ask colleagues to recommend a “doctor’s doctor” who specializes in treating physicians, suggests Yellowlees, author of Physician Suicide: Cases and Commentaries.

In Medscape’s 2022 report, Suicide: A Tragedy of the Profession, almost all respondents who reported having suicidal colleagues said they offered help, including emotional support, practical assistance, referrals, speaking to family members, or even personally taking the colleague to the ED or to a therapist.

To enhance physicians’ ability to help each other, Lin recommends “gatekeeper training,” which has been shown to reduce suicide. “This strategy utilizes a peer-to-peer model; but, rather than a single ‘peer buddy,’ everyoneis a ‘gatekeeper’ trained in approaches, such as QPR—Question, Persuade, Refer. ‘Gatekeepers’ are taught how to recognize warning signs of suicide, question the potentially suicidal individual, persuade him/her to get help, and provide referrals.”

Other Ways to Prevent Suicide

Lin advises physicians to “create a personalized safety plan and write down signs and clues that they may be going down the wrong path and what they can do — like breathing exercises, relaxation — and identifying people to talk to, places to go, or phone numbers to call, if those initial measures aren’t enough.” The plan is private and allows the physician to determine at what point help is needed and who should be consulted. “Sometimes, when a person is in acute stress, even looking up a phone number can seem insurmountable. But having it on paper lowers the barrier, making it more achievable.”

Resources should be posted in places where physicians gather so that those who don’t already have a safety plan have easy access to that information, he suggests.

In addition, consideration may be given to reaching out for support if a colleague has died by suicide, experts suggest. Whether offered by one’s institution, a peer arrangement, spiritual counseling, or psychotherapy, one may need help dealing with the trauma, guilt, and grief that often accompany this type of loss.

Resources That Can Prevent Suicide

A free, peer-supported program that enables physicians to sign up for a physician “buddy” to provide mutual emotional support

Offers help to physicians in multiple countries around the world

Offers resources for healthcare providers for suicide prevention, postvention, support after suicide loss, and how to support colleagues