Come drink o’clock at my place, when the westerly sun is no longer drawing long fingers across the lawn, and the brown marsh frogs in the pond start their bob-bob-bob calls, a strange thing happens to the dark purple petunias that randomly border the garden.

They start to glow; their silky purple petals seem to pulsate against their background of mixed greens, suddenly intensely luminous. 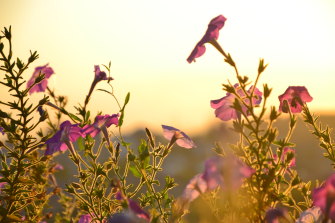 The glow of the purple petunia at dusk.Credit:iStock

The effect of the glowing petunias is not caused by the gin, but by a low light adjustment in our vision receptors, called the Purkinje effect, after the 19th century Czech anatomist, Jan Evangelista Purkyne. As part of our eyes’ adaptation to dark, peak luminance shifts from the red end of the spectrum to the blue end in low light conditions. So as dusk drains away the light, reds appear darker, while blues are more noticeable.

The red end of the Purkinje effect is particularly noticeable in the garden in the case of red geraniums, which all day are brilliant against their green foliage, while at night the foliage seems brighter than the almost-black flowers.

The Purkinje effect means that a garden that is predominantly red and green becomes drab at dusk, while blue flowers make magic in the twilight, especially when joined by white flowers and silver or variegated foliage to pull more light from a dimming sky.

The idea of a night garden goes back to the very earliest gardens and reached its peak with the Mughal gardens of the 16th-18th centuries. The Mughal garden designers made gardens that wash away the heat of the day through glowing flowers, fragrant plants and the sound and reflective qualities of water.

To deepen glowing blues, add white flowers. Many of these are especially fragrant just as the sun goes down, including gardenias, brugmansia, frangipani and Madagascar jasmine, Stephanotis floribunda. Unscented whites are worth adding to the dusk garden too. Perhaps tall floaty cosmos or the moth-like flowers of white guara.

A controversial addition would be moonflower, Ipomea alba, trailing up a trellis, or along a fence. The hand-sized flowers of this twining climber unfurl like silk satin skirts just as dusk falls, emitting an intoxicating fragrance. On the downside, the plant is a weed of the Tweed and Clarence River catchments as a result of gardeners dumping garden waste in bushland and creeks, and has weedy potential elsewhere in NSW.

I haven’t grown Ipomea alba for some time, but when I did I found it to be annual in Sydney, killed off by cool winters. But given climate change, be on the safe side by saving only as much seed as you need for next year before destroying seed pods and pulling the whole plant when daylight saving ends.

If you don’t feel up to the environmental responsibility of moonflower, choose a white Mandevilla instead – no fragrance, but white blooms all day and all night, almost all year, and no worries. Or simply embrace the weird glow of the purple petunia.

Make the most of your health, relationships, fitness and nutrition with our Live Well newsletter. Get it in your inbox every Monday