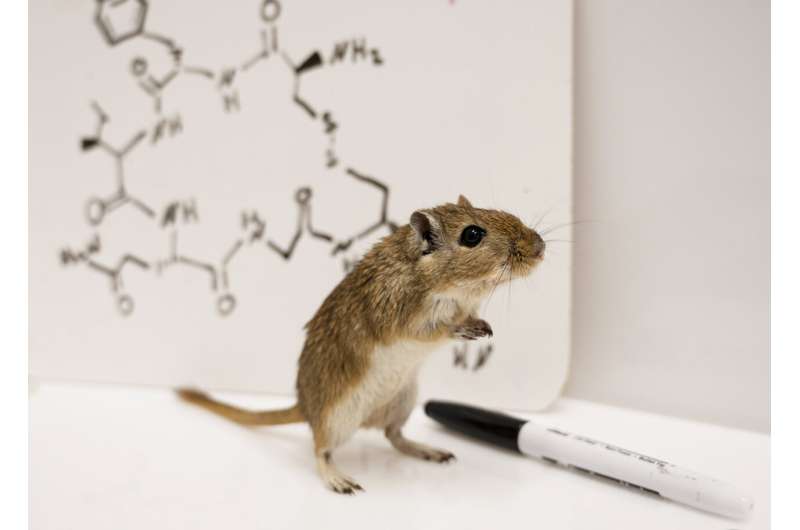 Testosterone can foster friendly, prosocial behavior in males, a new animal study finds. The Proceedings of the Royal Society B: Biological Sciences published the research on Mongolian gerbils conducted by neuroscientists at Emory University.

“For what we believe is the first time, we’ve demonstrated that testosterone can directly promote nonsexual, prosocial behavior, in addition to aggression, in the same individual,” says Aubrey Kelly, Emory assistant professor of psychology and first author of the study. “It’s surprising because normally we think of testosterone as increasing sexual behaviors and aggression. But we’ve shown that it can have more nuanced effects, depending on the social context.”

Richmond Thompson, a neuroscientist at Oxford College of Emory University, is co-author of the study.

Kelly’s lab has recently focused on the neural effects of oxytocin using rodent experimental models. Thompson’s lab investigates the neural effects of steroids in fish. Both scientists are trying to get at the question of how hormones work in the brain to allow an animal to rapidly change its behavior, depending on the social context.

In addition to sharing this research interest, Kelly and Thompson share a home as a married couple.

“The idea for this paper was borne out of us talking together over a glass of wine,” Kelly says. “It blends our two research worlds.”

The majority of human studies show that testosterone enhances aggressive behavior. Kelly and Thompson wondered if maybe testosterone might, in lockstep with being able to increase aggression toward intruders, also generally dampen prosocial behaviors. However, they also hypothesized that it might do something more radical—actually enhance positive social responses in contexts in which acting prosocially is appropriate.

To test this question, the Kelly lab conducted experiments on Mongolian gerbils, rodents that form lasting pair bonds and raise their pups together. While males can become aggressive during mating and in defense of their territory, they also exhibit cuddling behavior after a female becomes pregnant, and they demonstrate protective behavior toward their pups.

In one experiment, a male gerbil was introduced to a female gerbil. After they formed a pair bond and the female became pregnant, the males displayed the usual cuddling behaviors toward their partners. The researchers then gave the male subjects an injection of testosterone. They expected that the resulting acute rise in a male’s testosterone level would lessen his cuddling behaviors if testosterone generally acts as an antisocial molecule.

“Instead, we were surprised that a male gerbil became even more cuddly and prosocial with his partner,” Kelly says. “He became like ‘super partner.'”

In a follow-up experiment a week later, the researchers conducted a resident-intruder test. The females were removed from the cages so that each male gerbil that had previously received a testosterone injection was alone in his home cage. An unknown male was then introduced into the cage.

“Normally, a male would chase another male that came into its cage, or try to avoid it,” Kelly says. “Instead, the resident males that had previously been injected with testosterone were more friendly to the intruder.”

The friendly behavior abruptly changed, however, when the original male subjects were given another injection of testosterone. They then began exhibiting normal chasing and/or avoidance behaviors with the intruder. “It was like they suddenly woke up and realized they weren’t supposed to be friendly in that context,” Kelly says.

The researchers theorize that because the male subjects experienced a surge in testosterone while they were with their partners, it not only rapidly increased positive social responses toward them but also primed the males to act more prosocially in the future, even when the context changed and they were in the presence of another male. However, the second testosterone injection then rapidly prompted them to switch their behavior to become more aggressive, as appropriate to the context of a male intruder.

“It appears that testosterone enhances context-appropriate behavior,” Kelly says. “It seems to play a role in amplifying the tendency to be cuddly and protective or aggressive.”

The laboratory experiments, in a sense, slowed down what the males might experience almost simultaneously in the wild. In their natural habitat, Kelly explains, mating with a partner elevates testosterone, which primes them to act cuddly in the moment and in the near future while living with their partner, even if the testosterone levels decline.

If a rival entered its burrow the gerbil would likely experience another surge of testosterone that would immediately help adjust his behavior so he can fend off the rival and protect his pups. Testosterone, then appears to help animals rapidly pivot between prosocial and antisocial responses as the social world changes.

The current study also looked at how testosterone and oxytocin interact biologically. The results showed that the male subjects receiving injections of testosterone exhibited more oxytocin activity in their brains during interactions with a partner compared to males that did not receive the injections.

“We know that systems of oxytocin and testosterone overlap in the brain but we don’t really understand why,” Kelly says. “Taken together, our results suggest that one of the reasons for this overlap may be so they can work together to promote prosocial behavior.”

Rather than just flipping an “on” or “off” button to modulate behaviors, hormones seem to play a more nuanced role, Kelly says. “It’s like a complicated dashboard where one dial may need to move up a bit while another one moves down.”

Human behaviors are far more complex than those of Mongolian gerbils, but the researchers hope that their findings provide a basis for complementary studies in other species, including humans.