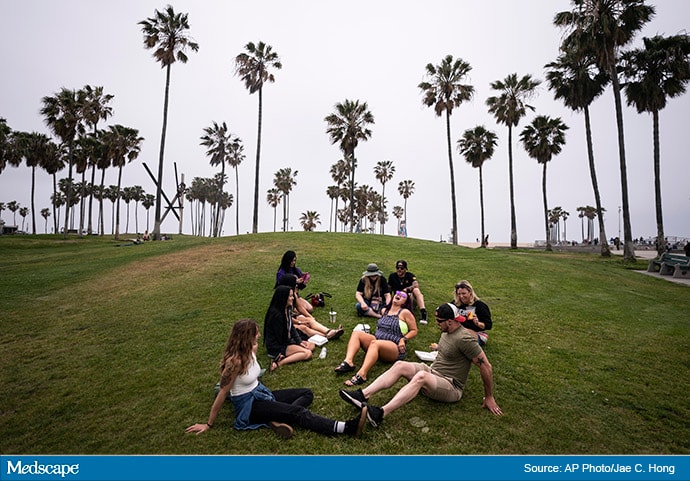 A group of friends, who said they are fully vaccinated for COVID-19, mingle on the beach in the Venice section of Los Angeles.

COVID-19 deaths in the United States have tumbled to an average of around 600 per day — the lowest level in 10 months — with the number of lives lost dropping to single digits in well over half the states and, on some days, hitting zero.

Confirmed infections have fallen to about 38,000 per day on average, their lowest mark since mid-September. While that is still cause for concern, reported cases have plummeted 85% from a daily peak of more than a quarter-million in early January.

The last time U.S. deaths from the pandemic were this low was in early July of last year. The number of people with COVID-19 who died topped out in mid-January at an average of more than 3,400 a day, just a month into the biggest vaccination drive in the nation’s history.

The Boston Herald put a huge zero on its front page Wednesday under the headline “First time in nearly a year state has no new coronavirus deaths.” Indiana reported one COVID-19 fatality Tuesday. Kansas, which peaked at 63 reported deaths on Dec. 22, has been in the single digits since February and seen multiple days with just one virus-related death.

Dr. Amesh Adalja, an infectious disease specialist at Johns Hopkins University, said that vaccinations have played a crucial role even as the nation struggles to reach herd immunity.

“The primary objective is to deny this virus the ability to kill at the rate that it could, and that has been achieved,” he said. “We have in effect tamed the virus.”

About 45% of the nation’s adults are fully vaccinated, and nearly 59% have received at least one dose, according to the Centers for Disease Control and Prevention. This week, Pfizer’s vaccine won authorization for use in 12- to 15-year-olds, a move that could make it easier to reopen the nation’s schools.

Physicians like Dr. Tom Dean in South Dakota’s rural Jerauld County are cautiously optimistic, concerned about the many people who have decided against getting vaccinated or have grown lax in guarding against infections. The county has recorded just three confirmed cases in the last two weeks, according to Johns Hopkins data.

“What I’m afraid of is people believing this whole thing is over and you don’t have to worry about it any more,” Dean said. “I think complacency is our biggest threat right now.”

Several states, including Wyoming, Vermont, Alaska and Hawaii, were averaging fewer than one COVID-19 death per day over the past week, according to data through Tuesday from Johns Hopkins.

And even among the five states with the highest daily deaths — Michigan with an average of 65.4, Florida with 61.7, California with 48, Texas with 44 and New York with 39.3 — all but Florida’s number were going down.

California, the epicenter of the U.S. outbreak over the winter, logged 1,231 new confirmed cases Wednesday, down from a peak of 40,000. Los Angeles County reported 18 deaths Tuesday, versus more than 200 a day in January.

Vermont, which at nearly 63% leads the country in the share of its population that has received at least one vaccine dose, has gone nearly a week without reporting a COVID-19 death.

The improvement hasn’t been as dramatic everywhere. Michigan, which for weeks has reported the nation’s worst infection rate, is only now starting to see a decline in mortality. But over the past two weeks, cases in the state plunged from a daily average of almost 4,860 to about 2,680 on Monday.

“Every day we’re getting closer to putting this pandemic behind us,” Michigan Gov. Gretchen Whitmer said.

In Kansas, the Amos Family Funeral Home & Crematory saw several COVID-19 victims at the height of the outbreak. But for weeks now it has handled one, said Parker Amos, president of the Kansas City-area business.

The funeral home is now working through a backlog of memorial services that families put off when cases were surging.

Dr. Mark Rosenberg, president of the American College of Emergency Physicians, was nearly placed on a ventilator when he contracted COVID-19 in December. Now he marvels at how things have changed, saying people are so joyful that it reminds him of the photos he has seen of soldiers returning from World War II.

“That is how it is starting to feel, that we made it through,” said Rosenberg, who practices emergency medicine at St. Joseph’s Health in Paterson, New Jersey. “People are touching each other again. They are hugging.”

The overall U.S. death toll in the pandemic stood at over 583,000 as of Wednesday. Teams of experts consulted by the CDC projected in a report last week that new deaths and cases will fall sharply by the end of July and continue dropping after that.

The encouraging outlook stands in sharp contrast to the catastrophe unfolding in places like India and Brazil.

“I think we are in a great place, but I think India is an important cautionary tale,” warned Justin Lessler, a professor of epidemiology at John Hopkins.

“If there is a right combination of vaccine hesitancy, potentially new variants and quickly rolling back control measures that comes together, we could potentially screw this up and have yet another wave that is completely unnecessary at this point,” Lessler said.

Ali Mokdad, a University of Washington professor of health metrics sciences, predicted that as vaccinations continued, both confirmed cases and deaths would decline into the summer, leading many to assume “COVID-19 is gone” even as outbreaks in places like India carry the potential to fuel new, more virulent variants.

“The race is to vaccinate as much as we can before we go into the winter,” Mokdad said, adding that the current percentage of the population vaccinated is not high enough to stop another wave of coronavirus infections.