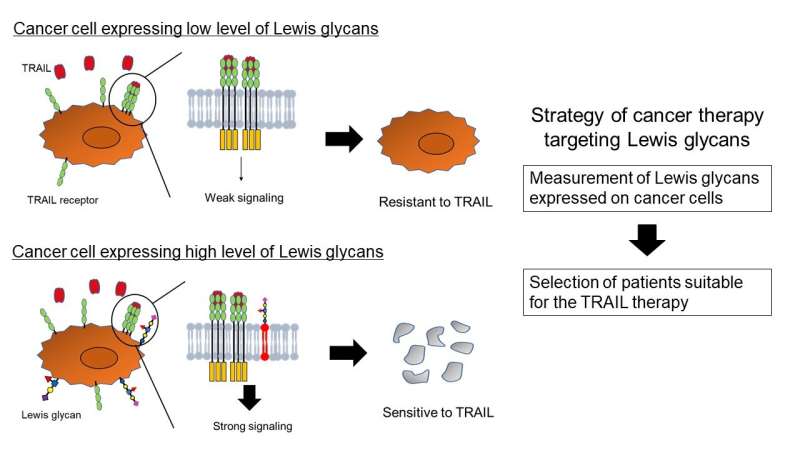 A cytokine named TRAIL binds to TRAIL receptors and kills cancer cells, but not normal cells. Various anticancer drugs targeting TRAIL receptors have been developed and gained great attention as a promising cancer therapeutics, but a certain population of cancer patients does not respond to the therapy. Therefore, many researchers have tried to identify a key molecule that determines the sensitivity of cancer cells to the TRAIL therapy.

The surface of every cell in our body is decorated with sugar chains called glycans, which determine the character of cells and enable cells to talk to each other. Glycan structures on the cell surface dramatically change when cells become cancerous. In this multi-institutional study published in Oncogene and led by Associate Professor Moriwaki in Toho University and Professor Miyoshi in Osaka University, researchers identified the glycan structure that makes cancer cells vulnerable to the death-inducing cytokine known as TRAIL, and paved a new way to develop a predictive biomarker for the TRAIL therapy.

Previously, Drs. Moriwaki and Miyoshi had found that fucose, which is one of building blocks of glycans, is an important sugar affecting the sensitivity of cancer cells to TRAIL. This time, they closely looked at the structures of glycans carrying fucose and discovered that cancer cells highly expressing the specific glycan structure named Lewis glycans on the surface were more vulnerable to TRAIL-induced cell death. They also found that although Lewis glycans are attached to proteins and lipids on the surface, Lewis glycans on lipids, but not on proteins, enhance TRAIL sensitivity. Furthermore, they could predict the sensitivity of colon cancer patient-derived cancer cells to TRAIL-induced cell death by testing the expression level of Lewis glycans. Therefore, this specific glycan structure is expected to be a valuable biomarker to predict the effectiveness of the TRAIL therapy.

Dr. Tomoya Fukuoka, a lead author of the study, said, “These findings shed light on the regulatory mechanism of TRAIL-induced cell death and encourage the development of a novel therapeutic strategy targeting the TRAIL signaling. Furthermore, TRAIL resistance is a vital intrinsic mechanism that renders cancer cells insensitive to certain kind of cancer immunotherapy, so these findings also have a great impact on the development of a predictive biomarker for cancer immunotherapy.”