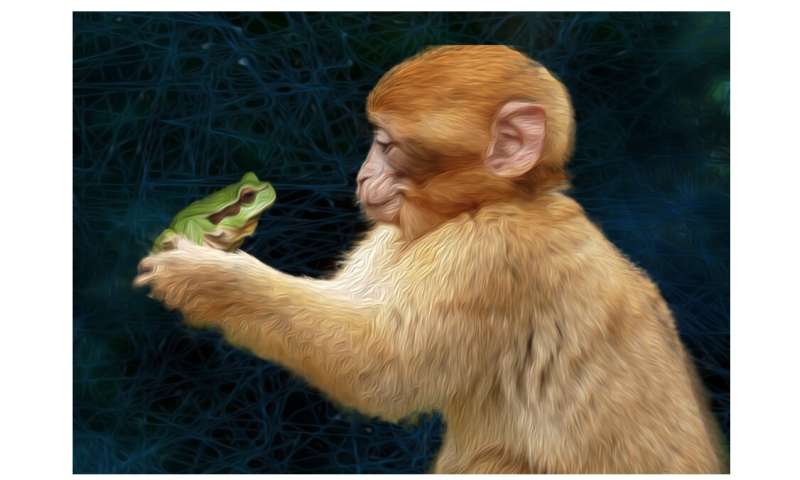 Researchers in Japan have demonstrated for the first time the spinal motor module hypothesis in the primate arm, opening a new pathway for recovery after disease or injury.

The human hand has 27 muscles and 18 joints, which our nervous system is able to coordinate for complex movements. However, the number of combinations—or degrees of freedom—is so large that artificially replicating this control and adjustment of muscle activity in real time taxes even a modern supercomputer. While the method used by the central nervous system to reduce this complexity is still being studied, the motor module hypothesis is one possibility.

Under the motor module hypothesis, the brain recruits interneuronal modules in the spinal cord rather than individual muscles to create movement, wherein different modules can be combined to create specific movements. Nearly 40 years ago, research in frogs showed that simultaneously recruiting two modules of neurons controlling leg muscles created the same pattern of motor activity that represents a “linear summation” of the two component patterns.

An international team of researchers, led by Kazuhiko Seki at the National Center of Neurology and Psychiatry’s Department of Neurophysiology, in collaboration with David Kowalski of Drexel University and Tomohiko Takei of Kyoto University’s Hakubi Center for Advanced Research, attempted to determine if this motor control method is also present in the primate spinal cord. If validated, it would provide new insight into the importance of spinal interneurons in motor activity and lead to new ideas in movement disorder treatments and perhaps even a method to “reanimate” a limb post-spinal injury.

The team implanted a small array of electrodes into the cervical spinal cord in three macaques. Under anesthesia, different groups of interneurons were recruited individually using a technique called intraspinal microstimulation, or ISMS. The team found that, as in the frog leg, the force direction of the arm at the wrist during dual-site simulation was equal to the linear summation of the individually recruited outputs. However, unlike the frog leg, the force magnitude output could be many times higher than that expected from a simple linear summation of the individual outputs. When the team examined the muscle activity, they found that this supralinear summation was in a majority of the muscles, particularly in the elbow, wrist, and finger. 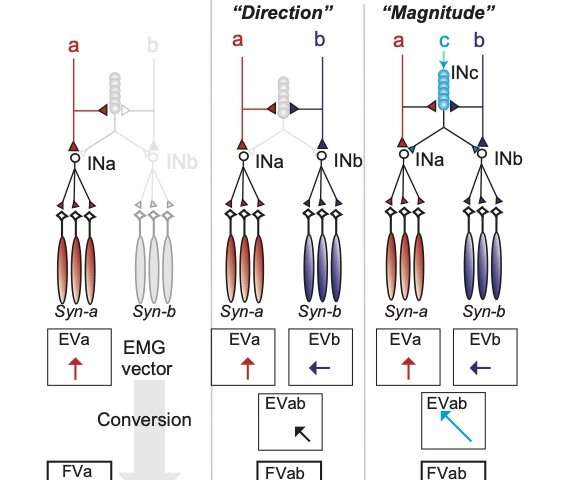 “This is a very interesting finding for two reasons,” explains Seki. “First, it demonstrates a particular trait of the primate spinal cord related to the increased variety of finger movements. Second, we now have direct evidence primates can use motor modules in the spinal cord to control arm movement direction and force magnitude both efficiently and independently.”

In effect, using paired stimulation in the primate spinal cord not only directly activate two groups of interneurons, INa and INb, which recruit their target muscle synergies, Syn-a and Syn-b, to set the arm trajectory, but can also activate a third set of interneurnons that can adapt the motor activity at the spinal level to change the force of the movement, group INc. This would let the brain plan the path the arm should take while the spinal cord adapts the muscle activity to make sure that path happens.

One example of this “plan and adapt” approach to motor control is the deceptively simple act of drinking from a can of soda. The brain can predetermine the best way to lift the can to your mouth for a sip, but the actual amount of soda in the can—and therefore the can’s weight—is perhaps unknown. Once your brain has determined the trajectory the can should take—in this case INa and INb—the amount of force needed to complete that action can be modulated separately in INc, rather than redetermining which sets of muscles will be needed.

This study experimentally proves for the first time that primate arm movements may be efficiently controlled by motor modules present in the spinal cord. Based on the results of this research, it is expected that the analysis and interpretation of human limb movements based on the motor module hypothesis will further advance in the future.