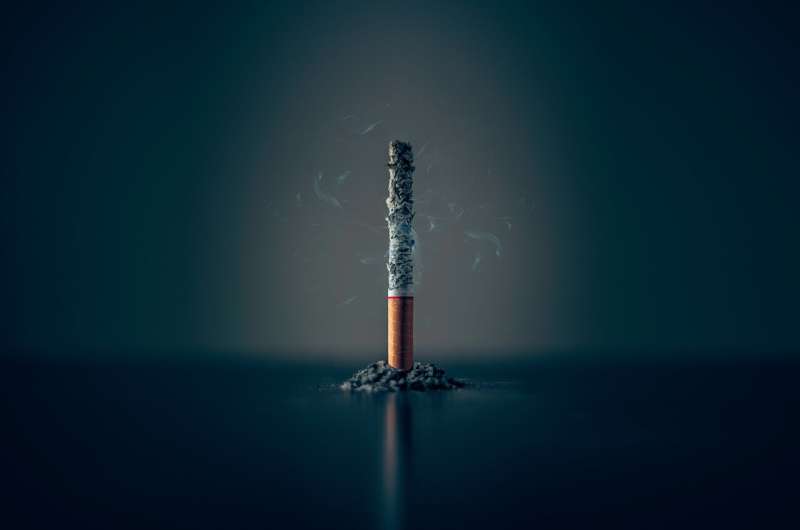 Smoking cigarettes may increase the risk of a heart attack by activating a gene that affects blood clotting, according to a new study by scientists at the University of Bristol.

The study, published in Circulation Research, used a multidisciplinary approach involving four different study designs, including data from Children of the 90s—a longitudinal study of over 14,000 individuals.

The scientists demonstrated that activity of a gene, known as F2RL3, can be enhanced by smoking and that this gene, which is expressed on blood platelets, can in turn increase the risk of clotting events that lead to a heart attack.

A mechanism used by cells to control gene expression, known as DNA methylation, is a reversible process that changes the properties of DNA molecules (without changes being made to the DNA sequence itself). Cigarette smoking appears to cause changes to DNA methylation at lots of sites across the genome, which could be one way that smoking predisposes to adverse health outcomes such as heart disease.

Researchers discovered this was the case with the F2RL3 gene, whose protein (PAR4) is involved in activating platelets, the blood cells that help form blood clots. Through analyzing smoking-related changes seen in this gene, the scientists were able to see that reductions in DNA methylation at F2RL3 could contribute to the increased risk of a heart attack in smokers by changing the activity of platelets.

Dr. Laura Corbin, research fellow in the Bristol Medical School (PHS) and a lead author of the study, said: “This work is vital in understanding how smoking can lead to an increased risk of heart attacks.

“Crucially, whilst the changes at this gene appear to be reversible, our data showed that it can take many years for levels to return to normal after a person gives up smoking. This finding therefore provides more evidence of the devastating impact smoking has on our bodies. In addition, there are other genetic and non-genetic factors that can affect DNA methylation in a similar way and this means that our findings could also be relevant beyond smoking.