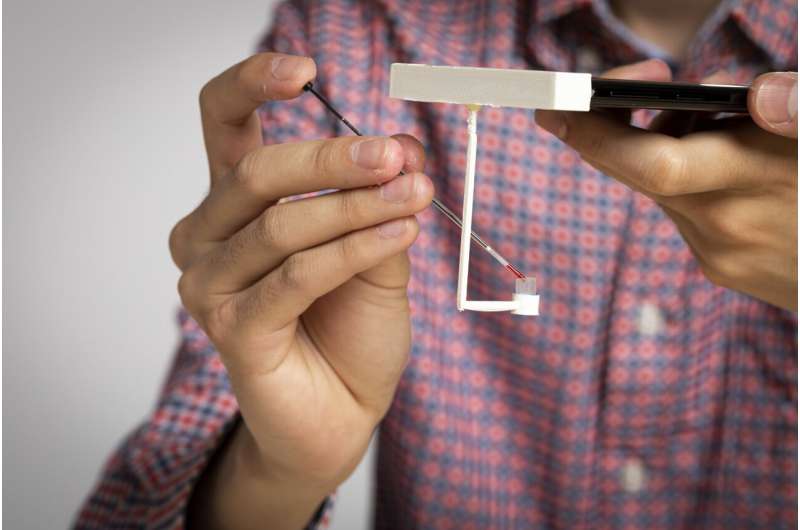 Blood clots form naturally as a way to stop bleeding when someone is injured. But blood clots in patients with medical issues, such as mechanical heart valves or other heart conditions, can lead to a stroke or heart attack. That’s why millions of Americans take blood-thinning medications, such as warfarin, that make it harder for their blood to clot.

Warfarin isn’t perfect, however, and requires patients to be tested frequently to make sure their blood is in the correct range—blood that clots too easily could still lead to a stroke or a heart attack while blood that doesn’t clot can lead to extended bleeding after an injury. To be tested, patients either have to go to a clinic laboratory or use a costly at-home testing system.

Researchers at the University of Washington have developed a new blood-clotting test that uses only a single drop of blood and a smartphone vibration motor and camera. The system includes a plastic attachment that holds a tiny cup beneath the phone’s camera.

A person adds a drop of blood to the cup, which contains a small copper particle and a chemical that starts the blood-clotting process. Then the phone’s vibration motor shakes the cup while the camera monitors the movement of the particle, which slows down and then stops moving as the clot forms. The researchers showed that this method falls within the accuracy range of the standard instruments of the field.

The team published these findings Feb. 11 in Nature Communications.

“Back in the day, doctors used to manually rock tubes of blood back and forth to monitor how long it took a clot to form. This, however, requires a lot of blood, making it infeasible to use in home settings,” said senior author Shyam Gollakota, UW professor in the Paul G. Allen School of Computer Science & Engineering. “The creative leap we make here is that we’re showing that by using the vibration motor on a smartphone, our algorithms can do the same thing, except with a single drop of blood. And we get accuracy similar to the best commercially available techniques.” 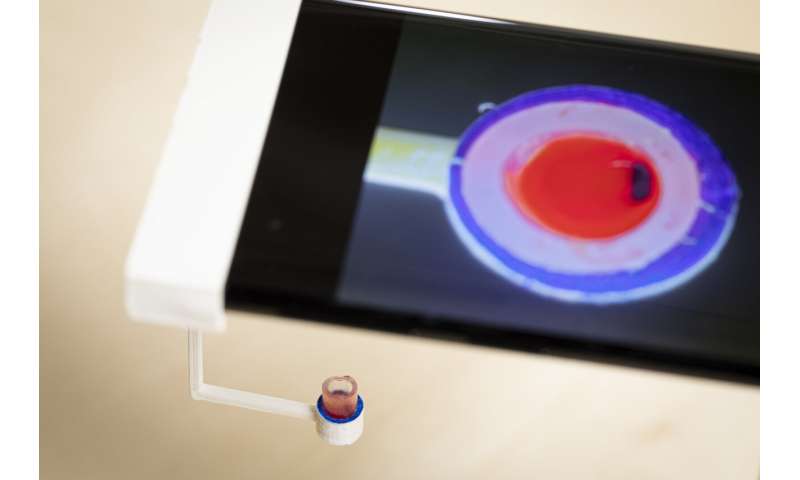 “Most people taking this medication are taking it for life. But this is not a set-and-forget type of thing—in the U.S., most people are only in what we call the ‘desirable range’ of PT/INR levels about 64% of the time,” said co-author Dr. Kelly Michaelsen, assistant professor of anesthesiology and pain medicine in the UW School of Medicine. “This number is even lower—only about 40% of the time—in countries such as India or Uganda where there is less frequent testing. How can we make this better? We need to make it easier for people to test more frequently and take ownership of their health care.”

Patients who can monitor their PT/INR levels from home would only need to go to see a clinician if the test suggested they were outside of that desirable range, Michaelsen said.

The researchers wanted an inexpensive device that could work similarly to how at-home blood sugar monitors work for people with diabetes: A person can prick their finger and test a drop of blood.

“We started by vibrating a single drop of blood and trying to monitor waves on the surface,” said lead author Justin Chan, a UW doctoral student in the Allen School. “But that was really challenging with such a small amount of blood.”

The team added a small copper particle because its motion was so much more reliable to track.

“As the blood clots, it forms a network that tightens. And in that process, the particle goes from happily bouncing around to no longer moving,” Michaelsen said. 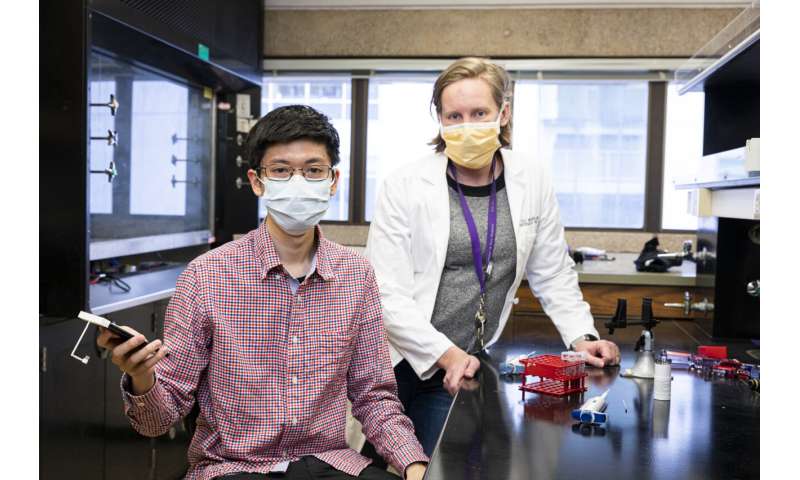 To calculate PT and INR, the phone collects two time stamps: first when the user inserts the blood and second when the particle stops moving.

“For the first time stamp, we’re looking for when the user inserts a capillary tube containing the sample in the frame,” Chan said. “For the end of the measurement, we look directly at the interior of the cup so that the only movement within those frames is the copper particle. The particle stops moving abruptly because blood clots very quickly, and you can observe that difference between frames. From there we can calculate the PT, and this can be mapped to INR.”

The researchers tested this method on three different types of blood samples. As a proof of concept, the team started with plasma, a component of blood that is transparent and therefore easier to test. The researchers tested plasma from 140 anonymized patients at the University of Washington Medical Center. The team also examined plasma from 79 patients with known blood-clotting issues. For both these conditions, the test had results that were similar to commercially available tests.

To mimic what a patient at home would experience, the team then tested whole blood from 80 anonymized patients at both Harborview and the University of Washington medical centers. This test also yielded results that were in the accuracy range of commercial tests.

This device is still in a proof-of-concept stage. The researchers have publicly released the code and are exploring commercialization opportunities as well as further testing. For example, currently all these tests have been done in the lab. The next step is to work with patients to test this system at home. The researchers also want to see how the system fares in more resource-limited areas and countries.

“Almost every smartphone from the past decade has a vibration motor and a camera. This means that almost everyone who has a phone can use this. All you need is a simple plastic attachment, no additional electronics of any kind,” Gollakota said. “This is the best of all worlds—it’s basically the holy grail of PT/INR testing. It makes it frugal and accessible to millions of people, even where resources are very limited.”