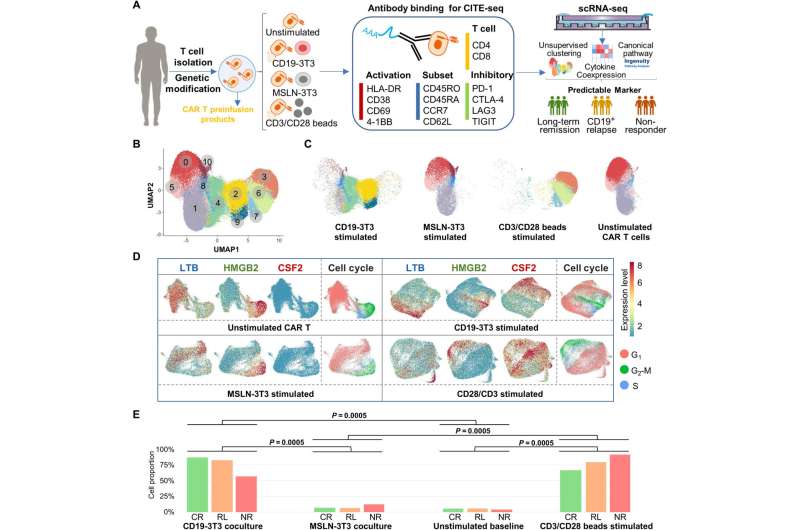 A type of cancer treatment known as CAR T therapy has shown great promise for blood cancer treatments in the last decade, but too often, patients relapse within a short time. Now, a team of researchers has uncovered some critical clues about why—potentially leading to treatments to prevent these relapses.

The study, a collaboration between researchers at Yale University and the University of Pennsylvania, was published in Science Advances.

CAR T therapy involves isolating virus-fighting T cells from a patient’s blood and genetically modifying them with chimeric antigen receptors (CAR), which target surface marker expressed on cancer cells. These CAR T cells are infused back into a patient’s circulation to fight cancer cells. It has proven particularly effective in fighting blood cancers such as acute lymphocytic leukemia (ALL), lymphoma, and multiple myeloma. However, the remissions in a significant number of subjects are short-lived, and 30% to 60% of treated patients relapse within one year.

The researchers set out to identify the differences between long-term remission patients and the patients who relapsed. They looked for patterns in the patients’ cells, examining 100,000 single CAR T cells from 12 pediatric ALL patients. Of these 12 patients, five had a complete remission lasting more than five years, another five relapsed during the course of the trial at a median time point of 9.6 months. The other two subjects did not show an objective response to the therapy.

With technologies developed in the lab of Rong Fan, professor of biomedical engineering at Yale University and of pathology at Yale School of Medicine, the researchers used what’s known as a “multi-omics” approach—combining data sets from the transcriptome and proteome—to perform a powerful single-cell analysis. Doing so, they were able to closely study the entire gene expression profile of each cell and identify hidden molecular mechanisms among the CAR T cells, which could have a role in the development of future treatments.

The research team identified modules of co-expressed cytokines—secreted proteins that act as messengers for the immune system and which are key regulators in the orchestration of immune cells. Among these, they found that a group of cytokines representing T helper 2 (Th2) function was prominent in the cell profiles of the patients who had gone into remission for five years or more. Th2 cells are a subtype of cells that mediate the activation and maintenance of our immune response. With this, said Pablo G. Camara, assistant professor of genetics at UPenn, “we could better assess differences in the functionality of CAR T cells from different patients.”

“This observation implies that Th2 function might be indispensable for maintaining a long-term remission in CAR T therapy,” added the study’s lead author, Zhiliang Bai, a postdoctoral associate in Fan lab at Yale.

Fan said the analysis provides valuable insights into the factors that determine why some patients go into lasting remission.

“It also suggests a potential biomarker to predict therapeutic outcomes prior to administering this costly and complex treatment in cancer patients,” he said.

The researchers expanded the study to 49 additional ALL patients enrolled in two other CAR T trials and performed independent evaluations. J. Joseph Melenhorst, co-author of the study and a former professor of Pathology and Laboratory Medicine at UPenn, said the experimental results at Yale and UPenn collectively verified that the presence of Th2 function in CAR T infusion product is indeed associated with long-term remission over 5 years.

“With about 10 years follow-up, we have collected enough data and are now able to answer this pressing unmet question: compared with very durable responders, why have those patients relapsed?” he said.

Based on the current findings, the researchers have expanded their single-cell multi-omics profiling to 81 patients, covering all the clinical response types in the CAR T treatment.