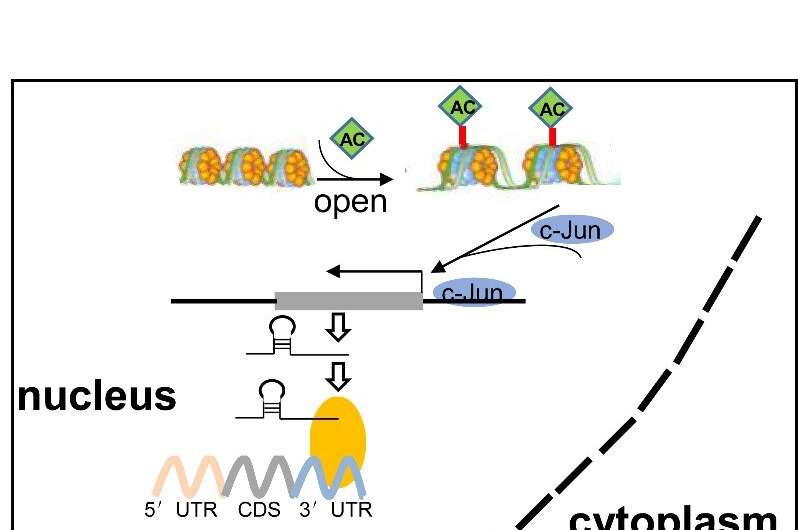 Led by Prof. Gao Shan from the Suzhou Institute of Biomedical Engineering and Technology of the Chinese Academy of Sciences (CAS), the researchers revealed that knockdown of LCDR in lung cancer cells could promote apoptosis. Results were published in PNAS.

Lysosome is involved in cellular homeostasis, and its dysregulation has been linked to various human diseases, including cancer. LncRNAs are noncoding RNAs with lengths longer than 200 nucleotides, whose dysregulation is associated with cancer hallmarks. They drive cancer growth and survival by interacting with DNA, RNA and protein assemblies, including the heterogeneous ribonucleic acid protein (hnRNP) family.

However, whether lncRNAs and/or hnRNPs are involved in lysosome-mediated cancer survival has not been elucidated.

In this study, LCDR binds to heterogeneous nuclear ribonucleoprotein K (hnRNP K) to regulate the stability of the lysosomal-associated protein transmembrane 5 (LAPTM5) transcript that maintains the integrity of the lysosomal membrane.

According to the researchers, knockdown of LCDR, hnRNP K or LAPTM5 promoted lysosomal membrane permeabilization and lysosomal cell death, thus resulting in apoptosis. LAPTM5 overexpression or cathepsin B inhibitors partially restored the effects of this axis on lysosomal cell death in vitro and in vivo.