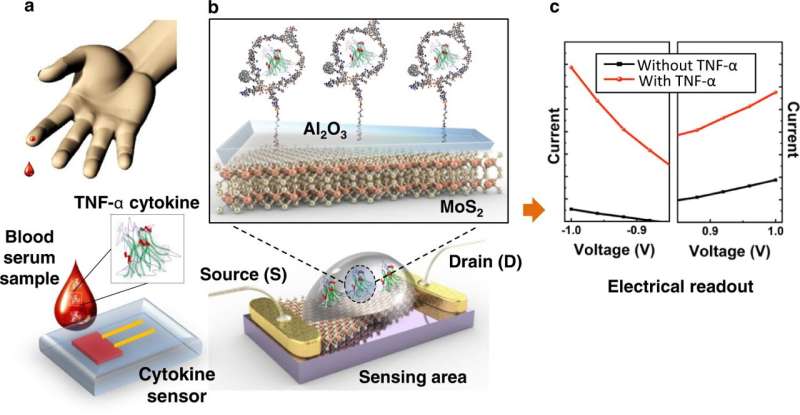 Researchers with the SFU Nanodevice Fabrication Group are developing a new biosensor that can be used to screen for Alzheimer’s disease and other diseases. An overview of their work has been recently published in the journal Nature Communications.

Their sensor works by detecting a particular type of small protein, in this case a cytokine known as Tumor Necrosis Factor alpha (TNF alpha), which is involved with inflammation in the body. Abnormal cytokine levels have been linked to a wide variety of diseases including Alzheimer’s disease, cancers, heart disease, autoimmune and cardiovascular disease.

TNF alpha can act as a biomarker, a measurable characteristic indicating health status.

COVID-19 can also cause inflammatory reactions known as “cytokine storms,” and studies have shown that cytokine inhibitors are an effective treatment for improving chances of survival.

“Our goal is to develop a sensor that’s less invasive, less expensive and simpler to use than existing methods,” says Engineering Science Assistant Professor Michael Adachi, the project’s co-lead.

“These sensors are also small and have potential to be placed in doctor’s offices to help diagnose different diseases, including Alzheimer’s disease.”

Adachi says that there are a number of established methods for detecting biomarker proteins such as enzyme-linked immunosorbent assay (ELISA) and mass spectrometry, but they have several drawbacks. These existing methods are expensive, samples need to be sent away to a lab for testing and it can take a day or more to receive the results.

He notes that their biosensor is extremely sensitive and can detect TNF alpha in very low concentrations (10 fM)—well below the concentrations normally found in healthy blood samples (200–300 fM).

Current screening tests for Alzheimer’s disease include a questionnaire to determine if the person has symptoms, brain imaging, or a spinal tap process which involves testing for the biomarker proteins in the cerebral spinal fluid of the potential patient.

The team has completed the proof-of-concept stage, proving that the two-electrode diode sensor is effective in detecting TNF alpha in a laboratory setting. They plan to test the biosensor in clinical trials to ensure it would be able to effectively detect biomarker proteins within a blood sample containing many different interfering proteins and other substances.

“We will continue testing the device’s ability to detect the same proteins using body fluid like blood samples,” says engineering science Ph.D. student Hamidreza Ghanbari. “The other objective is to use the same device but a different receptor to detect proteins that are more specific to Alzheimer’s disease.”

The researchers have also filed a provisional patent application with the Technology Licensing Office (TLO) at SFU. The project takes an interdisciplinary approach combining leadership from Adachi in Engineering Science and professors Karen Kavanagh in the Dept. of Physics and Miriam Rosin in Biomedical Physiology and Kinesiology (BPK).

“We need to be sure each sensor is made exactly the same to the tolerance required for the concentration we’re trying to predict or detect, and that’s the real challenge,” says Kavanagh.

Kavanagh says their sensor depends on properties of a type of semiconductor that is being studied for its two-dimensional (2D) properties, molybdenum disulfide (MoS2). This compound has different properties compared to common semiconductors, silicon or gallium arsenide (GaAs), which are much more widely used and well-understood.

Thushani De Silva is an Engineering Science Master’s graduate who worked on the project and emphasizes that the device is based on electrical measurement.

“Basically, we have a semiconductor on the sensing area and when the targeted protein interacts with the sensor, it changes the electrical signal output,” she explains. “By measuring this change, we can measure the concentration of the protein present in the body fluids.”

The team uses a type of nanomaterial called two-dimensional materials, which are potentially atomically thin and used as the sensing layer. DNA sequences called aptamers are applied on top of these 2D materials.