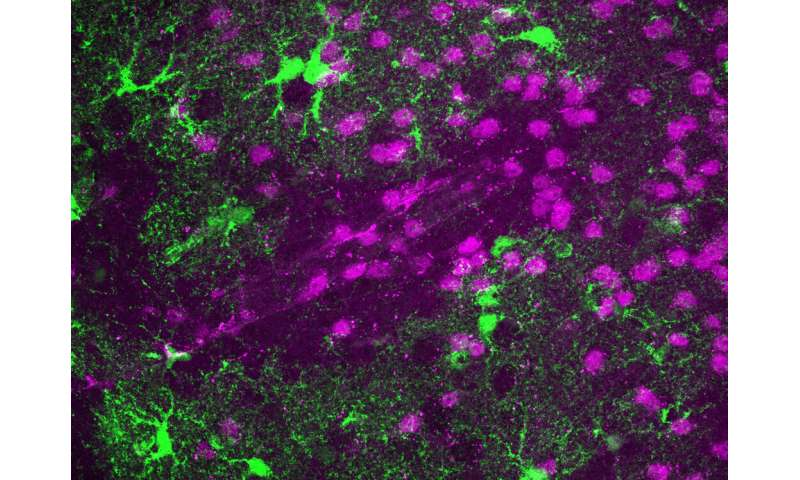 Now, in a study with potential impacts on a variety of neurological diseases, Virginia Tech researchers have provided the first experimental evidence from a living organism to show that an abundant, star-shaped brain cell known as an astrocyte is essential for blood-brain barrier health.

The research in today’s online edition of the journal GLIA reassesses traditional claims about the role of astrocytes in the brain and confirms the long-held assumption—although it had been recently disputed—that astrocytes support the blood-brain barrier.

“Blood-brain barrier leakage is a problem in the aging brain as well as many different neurological diseases,” said Stefanie Robel, an assistant professor at the Fralin Biomedical Research Institute at VTC and the study’s senior author. “Without astrocytes, the blood-brain barrier becomes leaky and ineffective, leaving brain tissue vulnerable to a variety of medical conditions. If we know what maintains the barrier in the healthy brain, we will be able to better understand what goes wrong in traumatic brain injury and in Alzheimer’s disease—all health problems with blood-brain barrier damage.”

Generally, researchers suspect astrocytes support the blood-brain barrier by releasing factors helpful to maintaining tight connections between the cells in the barrier.

In the new study, scientists with the Fralin Biomedical Research Institute genetically ablated a small number of astrocytes in adult mice to determine if the cells were necessary for blood-brain barrier health.

The researchers used small, intermediate-sized, and large molecular tracers to evaluate the permeability of the blood-brain barrier. All of the markers passed through the barrier in some areas, while in other areas only small tracers leaked, suggesting that leakages were happening at various sizes.

“We now have great tools to learn about what astrocytes really do in the adult brain,” said Robel, who is also an assistant professor in Virginia Tech’s School of Neuroscience. “It’s possible that those leaks weren’t detected in previous studies.”

In recent years, contradictory studies have emerged in which scientists removed astrocytes in animal models with no indications of harm to the blood-brain barrier.

However, when Virginia Tech scientists used a mouse model to mimic the effect of the removal of astrocytes, varying degrees of permanent blood-brain barrier damage occurred, with the amount of damage possibly in proportion with the numbers of ablated astrocytes. In these scenarios, the scientists determined neighboring astrocytes do not rescue the blood-brain barrier when it is damaged.

The research began after the scientists challenged commonly accepted statements in neuroscience.

“I would read a review article that would say astrocytes maintain the blood-brain barrier in the adult healthy brain, but rarely was it followed by a citation that would show direct evidence of that fact,” said Benjamin Heithoff, the first author of the study and a graduate student who conducts research in the Robel lab at the Fralin Biomedical Research Institute.

“That lack of evidence told me that the field hadn’t quite teased apart this statement,” Heithoff said. “Assumptions can be held for a long time, and it takes studies like ours, with more sensitive tools, to re-evaluate them. Now that we have reinforced this assumption with direct experimental data, we have positioned ourselves to identify how this vital function of astrocytes is impacted in disease and after injury.”