Air pollution from cars’ exhaust fumes may be altering the structure of children’s brains to make them more anxious, new research suggests.

Researchers have long noted higher rates of mental illness, learning and developmental delays (not to mention asthma and obesity) among children growing up near congested freeways.

For the first time, however, University of Cincinnati scientists have actually seen signs of those changes, using neuroimaging.

Those exposed to pollution had higher volumes of a metabolite that has been linked to Alzheimer’s disease and brain disease.

And the same children had higher rates of short term anxiety, giving the scientists a clue to one way that pollution might affect the brain to increase risks of mental illness. 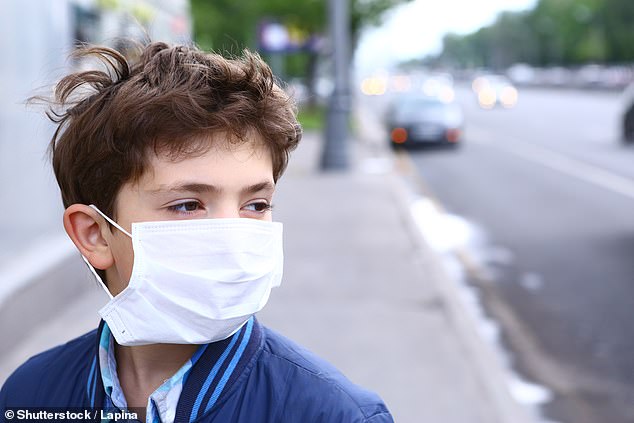 Over 40 percent of Americans live in cities and towns that have unhealthy levels of air pollution.

Fine particles, short-term pollution, long-term pollution and ozone are all bad for people of all ages in many ways, including raising risks for asthma, heart and lung diseases and diabetes.

But developing fetuses, infants and children are in particularly dire danger around pollution because their lungs and brains are still developing.

The World Health Organization estimates that 700,000 children under age five die every year due to air pollution.

Children’s lungs do not grow as big or as strong in heavily polluted areas.

And that fine matter from the air can travel from their lungs to the brain and damage protective membranes there.

Studies consistently demonstrate that children growing up in smoggy air perform more poorly on cognitive tests, have higher rates of ADHD, autism and other behavioral disorders.

A Dutch study of nearly 800 six- to 10-year-olds last year found signs that those exposed to pollution had changes in their cerebral cortices.

These outer portions of the brain are essential to impulse control – a function that is impaired in many kids with behavioral disorders.

But as children increasingly suffer not only behavioral issues but mood disorders in an increasingly polluted world, researchers at the University of Cincinnati wanted to investigate what related brain changes poor air quality might be enacting on them.

To do so, they performed brain scans that reveal the chemical make up of brain tissues on 14 children.

The research team also assessed the kids on the basis of a standardized anxiety scale and established how much pollution they had likely been exposed to over their lifetimes and in the previous year by referring to air pollution measures from the areas where the children lived.

Results from the brain chemical scans revealed notable differences in the levels of a chemical called myo-inositol in the brains of children who had lived in the poorest quality air.

Myo-inositol is a common metabolite of glucose – the molecule that gives cells energy – in the bodies of humans, other mammals and even in plants.

Its effects are rather Jekyll-and-Hyde: it seems to be beneficial in the treatment of polycystic ovary symptoms and help improve stroke outcomes and perhaps mood disorders in adults, but high levels of the metabolite may also be markers of the pre-dementia phase of Alzheimer’s.

Inflammation has long been suspected to corrupt the brain’s normal structures and behaviors, and glial cells, which surround and insulate neurons, are thought to play an important role in this inflammatory response.

The University of Cincinnati researchers suspect that the higher levels of myo-inositol in these cells may be linked to pollution, fueling inflammation and, in turn, raising risks for anxiety.

It suggested to lead study author, Dr Kelly Brunst, that there may be a link between TRAP (traffic-related air pollution), ‘metabolite dysregulation in the brain and generalized anxiety symptoms in otherwise healthy children,’ she said.

These were only short-term exposures and levels of symptoms, but they could be the canary in the coal mine.

‘I think it can speak to a bigger impact on population health … that increased exposure to air pollution can trigger the brain’s inflammatory response, as evident by the increases we saw in myo-inositol,’ said Dr Brunst.

‘This may indicate that certain populations are at an increased risk for poorer anxiety outcomes.’