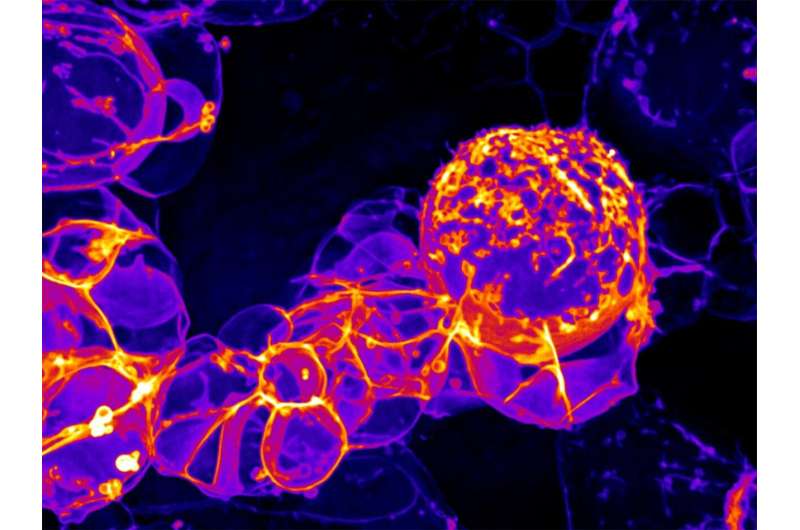 High-resolution imaging of fruit flies at the University of Oregon has captured mechanical motions that stem cells use to make neurons, the cells that make up the brain.

These motions coordinate cell division with differentiation, where newly born cells become neurons. Differentiation is essential for building the brain circuitry in complex organisms that underlies human cognition and emotions, said Ken Prehoda, a professor in the UO’s Department of Chemistry and Biochemistry.

Prehoda was principal investigator of a project published online May 18 in the journal Cell Reports.

Drosophila fly brains have some 100,000 neurons, while human brains have more than 50 billion. Developmental research in Drosophila often leads to advances in human medicine.

The discovery, Prehoda said, suggests that the mechanical process is vital to understanding brain development and, potentially, for regenerating neurons and their connections following injuries.

“To make so many neurons, the developing brain acts like a factory with individual stem cell ‘machines’ continually producing neurons,” Prehoda said. “We discovered that stem cells have more in common with real machines on a factory floor than previously appreciated in that they undergo a mechanical cycle when producing each neuron.”

In the project, Bryce LaFoya, a postdoctoral researcher in the UO’s Institute of Molecular Biology, used spinning-disk confocal microscopy to examine fruit fly brains with their stem cell membranes embedded with fluorescent markers. That unveiled the membrane dynamics of neural stem cells and their progeny at high resolution, revealing the mechanical cycle as each neuron was produced.

To make neurons, Prehoda said, neural stem cells must place special molecules, proteins called fate determinants, into one of two daughter cells that result from division. How that was done had been unclear despite many previous studies of physical interactions in which fate determinants are involved.

In a 2019 study in the journal eLife, Prehoda and Krystal Oon, a graduate student in the Institute of Molecular Biology, reported that proteins undergo movements along the membrane, but what drove the movement was known.

“Mechanical forces within the cell segregate components that are responsible for cellular identity after division,” LaFoya said. “After the cell divides in two, because of these forces, one cell will remain a stem cell while the other will go on to become a neuron.”

The cellular-scale mechanical forces revealed in the imagery were so strong that surrounding cell membranes became highly distorted before returning to normal, Prehoda added. Understanding the process from beginning to end, he said, could have implications for regenerative therapies.