Researchers in The Netherlands and Germany have warned that Pfizer-BioNTech’s coronavirus disease 2019 (COVID-19) vaccine induces complex reprogramming of innate immune responses that should be considered in the development and use of mRNA-based vaccines.

Mihai Netea and colleagues say that while the vaccine has been shown to be up to 95% effective in preventing infection with severe acute respiratory syndrome coronavirus 2 (SARS-CoV-2) and subsequent COVID-19, little is known about the broad effects the vaccine may have on the innate and adaptive immune responses.

In the current study (not peer-reviewed*), the team from Radboud University Medical Center in Nijmegen and Erasmus MC in Rotterdam confirmed the efficacy of BNT162b2 vaccination at inducing effective humoral and cellular immunity against several SARS-CoV-2 variants. 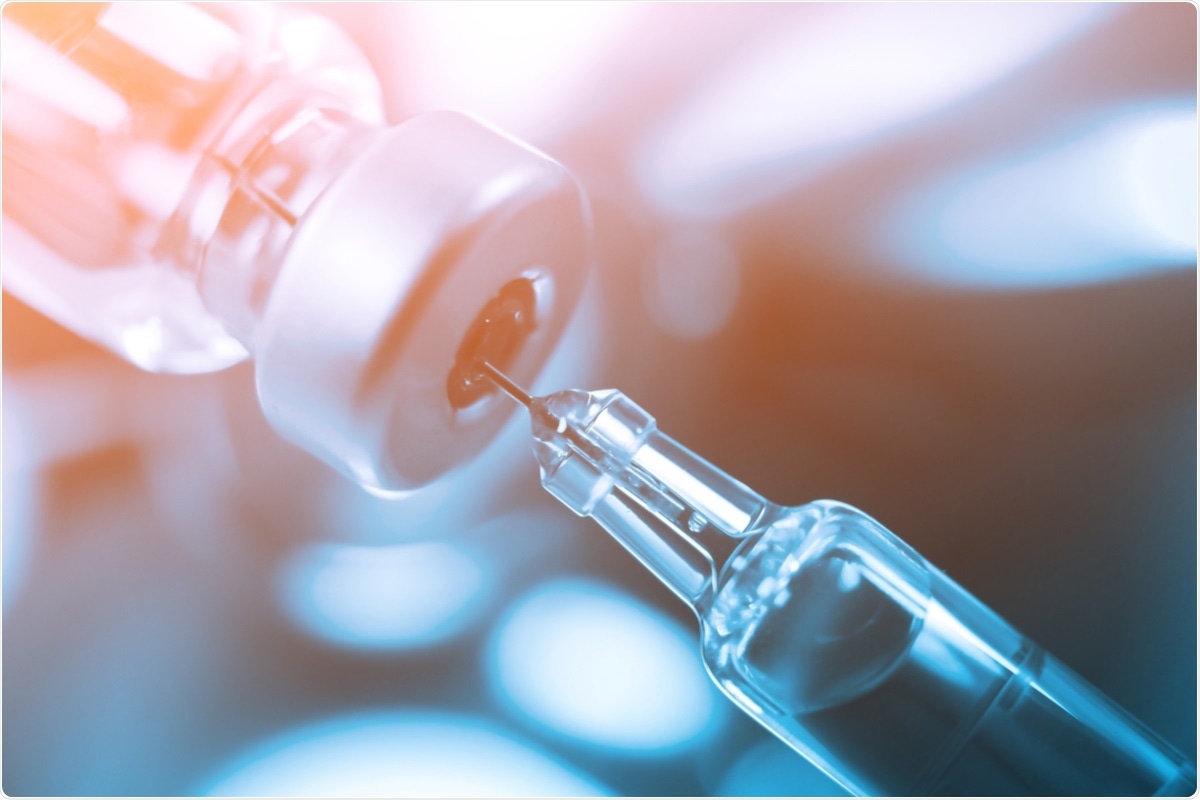 However, they also showed that the vaccine altered the production of inflammatory cytokines by innate immune cells following stimulation with both specific (SARS-CoV-2) and non-specific (viral, fungal and bacterial) stimuli.

Following vaccination, innate immune cells had a reduced response to toll-like receptor 4 (TLR4), TLR7 and TLR8 – all ligands that play an important role in the immune response to viral infection.

The mRNA BNT162b2 vaccine induces complex functional reprogramming of innate immune responses, which should be considered in the development and use of this new class of vaccines,” writes the team.

A pre-print version of the research paper is available on the medRxiv* server, while the article undergoes peer review.

Since the COVID-19 pandemic began in late December 2019, researchers across the globe have been racing to develop vaccines to help combat the global healthcare crisis.

The scale of the pandemic has led to the accelerated development of new mRNA-based vaccines, the first of which to be registered was the BNT162b2 vaccine from Pfizer-BioNTech.

This vaccine is based on a lipid nanoparticle–formulated, nucleoside-modified mRNA that encodes the spike protein of the SARS-CoV-2 strain that was isolated early on in the pandemic in Wuhan, China.

The spike protein is the main structure the virus uses to infect host cells, and its receptor-binding domain (RBD) is a primary target of neutralizing antibodies following natural infection or vaccination.

Several phase 3 trials have shown that BNT162b2 elicits broad humoral (antibody) and cellular responses that protect against COVID-19. However, many challenges remain while this and other mRNA-based vaccines are rolled out globally, with the emergence of new variants being of particular concern.

The variants that have emerged in the UK (B.1.1.7 lineage), South Africa (B.1.351), and Brazil (P.1) contain multiple mutations in the spike that could impact disease severity, viral transmissibility, and vaccine effectiveness.

The capacity of BNT162b2 to induce effective humoral and cellular immunity against the new SARS-CoV-2 variants is only now beginning to be understood,” says Netea and colleagues.

Furthermore, an unexplored area is whether BNT162b2 vaccination has long-term effects on innate immune responses:

“This could be very relevant in COVID-19, in which dysregulated inflammation plays an important role in the pathogenesis and severity of the disease,” writes the team. “Multiple studies have shown that long-term innate immune responses can be either increased (trained immunity) or down-regulated (innate immune tolerance) after certain vaccines or infections.”

What did the researchers do?

The researchers showed that one dose of the BNT162b2 vaccine induces high concentrations of anti-spike and anti-spike RBD antibodies, while a second dose three weeks later elicits even higher levels.

All the post-vaccine serum samples tested effectively neutralized the B.1.1.7 variant, but 37.5% showed decreased neutralizing activity against the B.1.351 variant.

These data support the evidence that B.1.351, and possibly other variants, may be able to escape vaccine-induced humoral immunity to a certain extent,” say the researchers.

What about the cellular response?

Vaccination with BNT162b2 has been reported to activate SARS-CoV-2-specific CD4+ and CD8+ T cells, and to increase the production of immune-modulatory cytokines such as interferon-γ (IFN-γ).

Netea and colleagues, therefore, assessed the secretion of IFN-γ from peripheral blood mononuclear cells (PBMCs) in response to different SARS-CoV-2 strains before and after BNT162b2 vaccination. 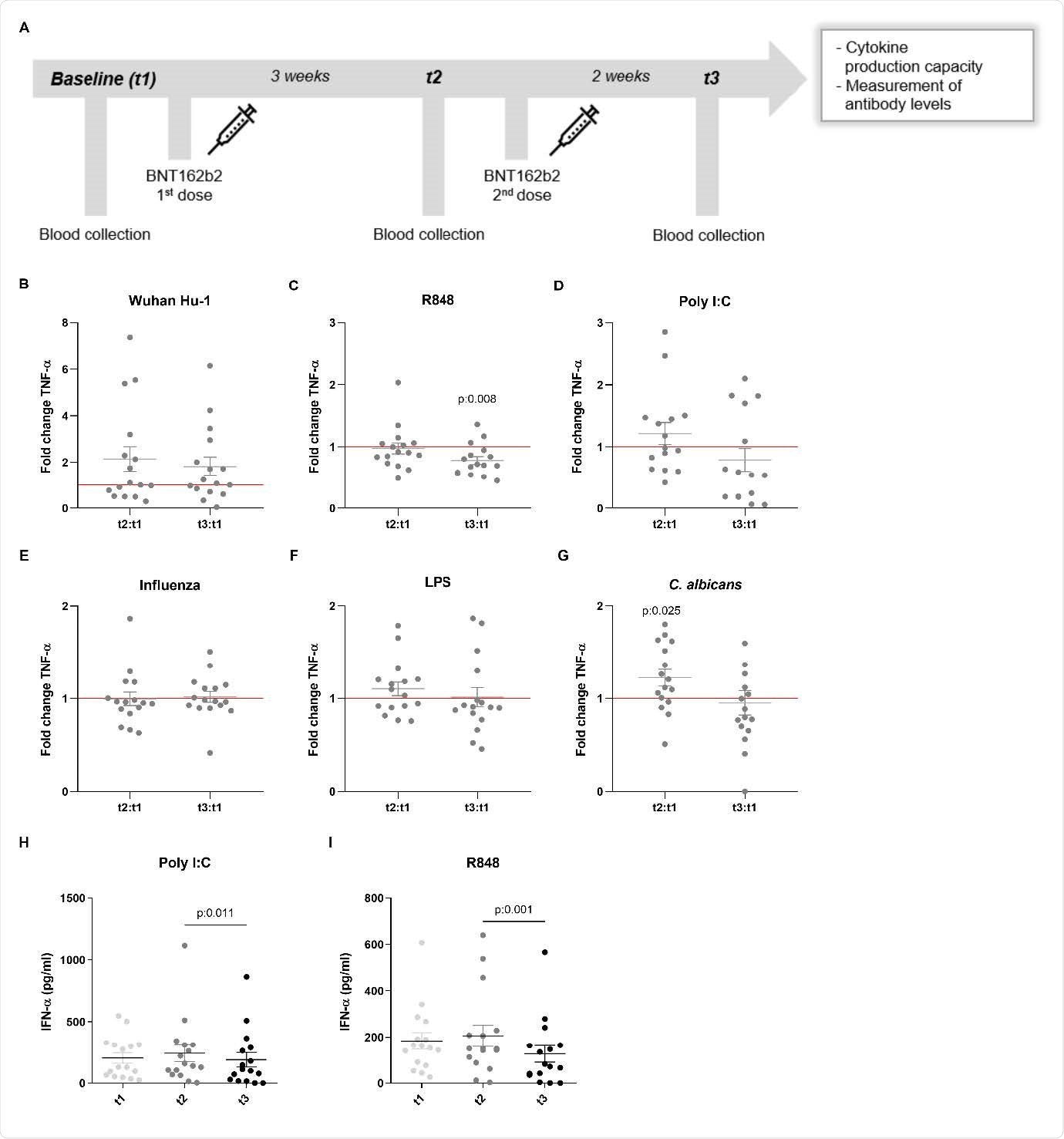 Interestingly, BNT162b2 vaccination decreased IFN-γ production following stimulation with the TLR7 and TLR8 agonist R848. The TLR7 and TLR8 ligands are key players in the immune response to viral infection.

In contrast, responses to the fungal pathogen Candida albicans were higher after vaccination.

In addition, the production of the anti-inflammatory cytokine interleukin-1Ra was reduced in response to Toll-like receptor 4 and C. albicans. This also suggests a shift towards increased inflammatory responses to fungi following vaccination, say the researchers.

These results collectively demonstrate that the effects of the BNT162b2 vaccine go beyond the adaptive immune system,” writes the team. “The BNT162b2 vaccine induces reprogramming of innate immune responses as well, and this needs to be taken into account.”

What do the authors advise?

The researchers say that in combination with strong adaptive immune responses, the reprogramming of innate responses could either contribute to a more balanced inflammatory reaction to SARS-CoV-2 infection or a weakened innate immune response.

The effect of the BNT162b2 vaccination on innate immune responses could also interfere with the responses to other vaccinations, adds the team.

Our findings need to be confirmed by conducting larger cohort-studies with populations with diverse backgrounds, while further studies should examine the potential interactions between BNT162b2 and other vaccines,” concludes Netea and colleagues.

Sally first developed an interest in medical communications when she took on the role of Journal Development Editor for BioMed Central (BMC), after having graduated with a degree in biomedical science from Greenwich University.