The tale of two mice: Striking picture shows how one is much slimmer after being given a pioneering fat-busting treatment

A striking picture shows the difference between two mice after one was given a pioneering fat-busting treatment.

Scientists discovered mice bred to be fat lost 20 per cent of their body weight after being given the therapy.

The risk of obesity-related diseases in the treated mice also dropped, as scientists were able to reduce factors such as insulin resistance.

The treatment works by silencing a specific gene which plays a crucial role in the development of fat in humans.

While this therapy has shown promising results in mice, further studies are required before it can be used in humans. 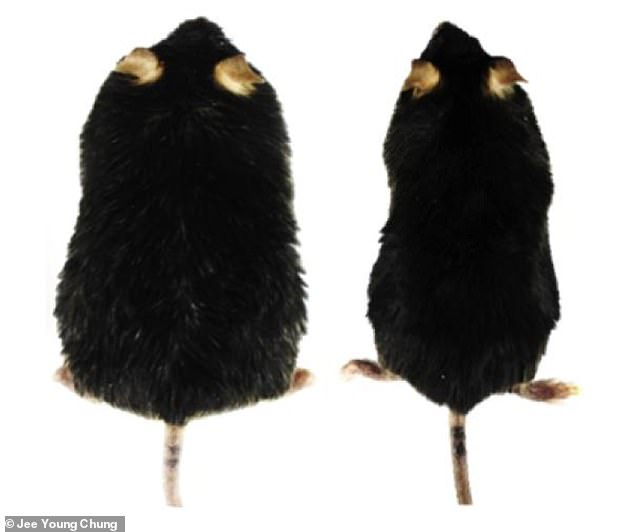 The authors wrote: ‘Despite its therapeutic potential, the translational research from a mouse model to patient in real-life is yet a hurdle to overcome.’

Millions of people worldwide are at risk of heart disease, stroke, type 2 diabetes and cancer due to being overweight.

The only weight-loss drug currently available on the NHS and in the US is orlistat, which stops fat being absorbed into the body.

It leads to five per cent weight loss after one year in humans, and can come with unpleasant side effects such as wind and incontinence.

To overcome this, Jee Young Chung and team at Hanyang University looked into developing a treatment which doesn’t cause side effects.

The breakthrough gene therapy had already worked in tests on cells in the lab, prompting the team to turn their attention to mice.

The male rodents were all fed a high-fat diet until they were obese and had insulin resistance – the driving factor of type 2 diabetes.

HOW DOES CRISPR DNA EDITING WORK?

The CRISPR gene editing technique is being used an increasing amount in health research because it can change the building blocks of the body.

At a basic level, CRISPR works as a DNA cutting-and-pasting operation.

Technically called CRISPR-Cas9, the process involves sending new strands of DNA and enzymes into organisms to edit their genes.

In humans, genes act as blueprints for many processes and characteristics in the body – they dictate everything from the colour of your eyes and hair to whether or not you have cancer.

The components of CRISPR-Cas9 – the DNA sequence and the enzymes needed to implant it – are often sent into the body on the back of a harmless virus so scientists can control where they go.

Cas9 enzymes can then cut strands of DNA, effectively turning off a gene, or remove sections of DNA to be replaced with the CRISPRs, which are new sections sent in to change the gene and have an effect they have been pre-programmed to produce.

But the process is controversial because it could be used to change babies in the womb – initially to treat diseases – but could lead to a rise in ‘designer babies’ as doctors offer ways to change embryos’ DNA.

Mice given the gene therapy for six weeks lost 20 per cent body fat on average, and had lower levels of inflammation and insulin resistance.

The experts, whose work was published in the journal Genome Research, targeted adipocytes – cells that essentially make ‘fat’.

The body only uses the amount of energy from food it needs to function. Any excess is stored in the adipose tissue which lays under the skin.

Adipocytes have a huge amounts of storage capacity and house lipids, which are fatty substances from the foods in our diet.

The researchers used cutting-edge technology called CRISPR, a gene-editing tool that acts like a pair of ‘molecular scissors’.

It allows scientists to go into an organisms’ DNA and change, edit or remove parts. The tool reduced the expression of the Fabp4 gene in the mice.

This stopped their adipocytes from storing lipids, without affecting the functioning of the surrounding cells.

The mice had a lower risk of chronic liver disease because there was a reduction in fatty lipid deposition in the liver, the scientists said.

They also had lower circulating triglycerides, the lipid which predominately makes fat cells.

This would lower their risk of serious complications caused by high triglycerides, such as heart disease, stroke and acute pancreatitis, according to the team.

An advantage of gene therapy in the treatment of various diseases is its ability to target organs or tissues without affecting others.

However, until now, the approach has been hampered by the inability to target only adipose tissue.