Researchers conducting a serosurveillance study of a North American deer species have provided evidence of exposure to severe acute respiratory syndrome coronavirus 2 (SARS-CoV-2) among the animals across four U.S. states.

The SARS-CoV-2 virus is the agent responsible for the ongoing coronavirus disease 2019 (COVID-19) pandemic that continues to pose a threat to global public health and the worldwide economy.

The team from the USDA-APHIS Wildlife Services in Fort Collins, Colorado and the USDA-APHIS Veterinary Services in Ames, Iowa, found that 40% of samples collected from white-tailed deer across Michigan, Pennsylvania, Illinois, and New York, in 2021 contained neutralizing antibodies against SARS-CoV-2.

Susan Shriner and colleagues say the findings highlight the need for dedicated wildlife disease surveillance programs to monitor the potential for reverse zoonotic (human to animal) spread of SARS-CoV-2 into novel wildlife reservoirs.

This potential “spillback” into wildlife species that live in close association with humans could affect the adaptation, evolution and transmission of the virus, says the team.

A pre-print version of the research paper is available on the bioRxiv* server, while the article undergoes peer review. 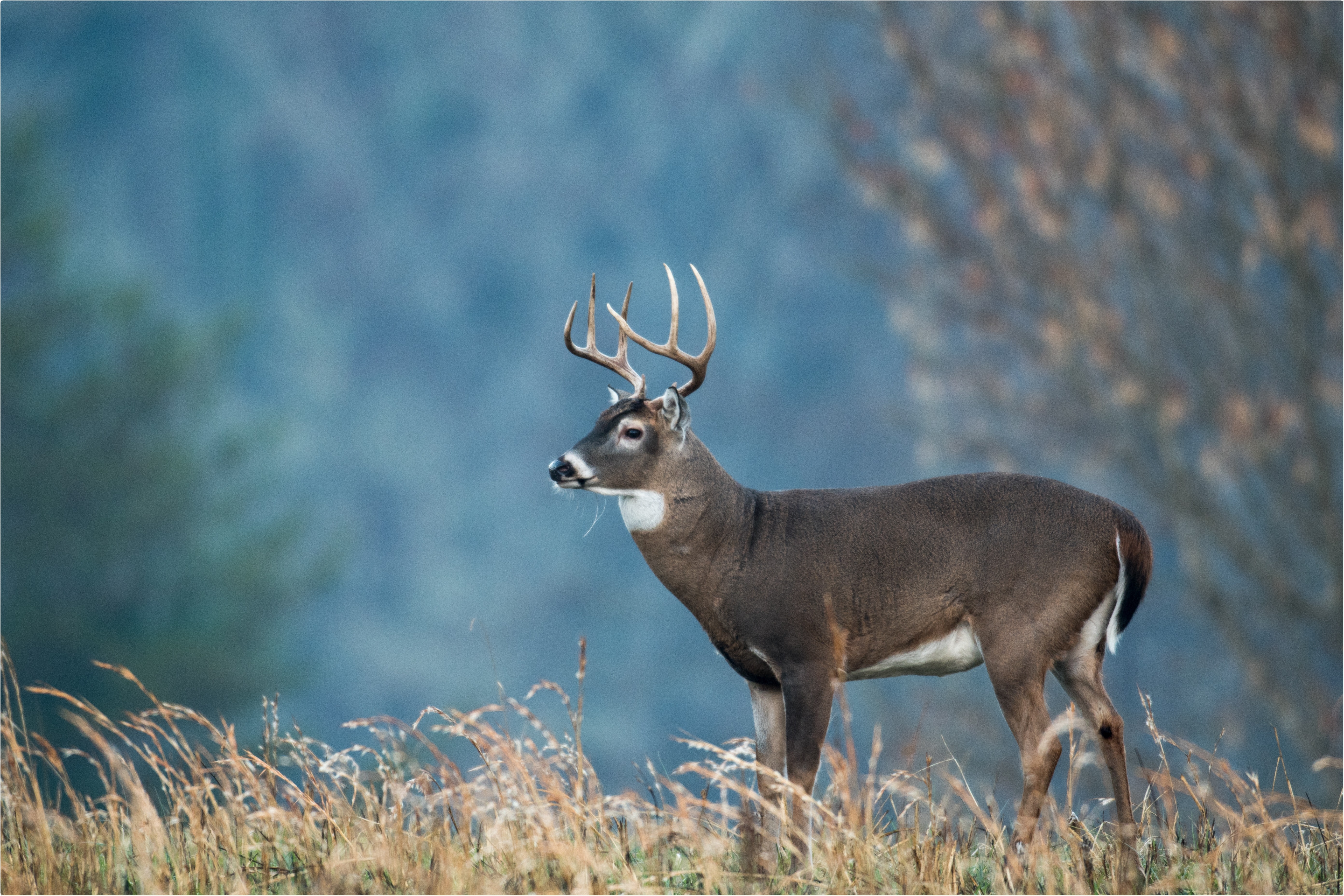 Since SARS-CoV-2 has been shown to infect multiple domestic and wild animal species, new animal reservoirs could emerge with the potential to disseminate and drive the evolution of the virus. Abundant wildlife species that live in close proximity to humans represent a particular concern.

“The pathogen pressure produced by significant human infections combined with susceptible wildlife hosts at the wildlife-human interface has led multiple authors to signal an urgent call for pro-active wildlife surveillance for early detection of potential reverse zoonosis of SARS-CoV-2 into wildlife populations,” says Shriner and colleagues.

Aside from the potential adverse health impacts on wildlife, persistent infections within a novel host reservoir could enable the virus to adapt and evolve into new strains with increased transmissibility, pathogenicity, and immune escape capabilities.

Evidence has previously shown that white-tailed deer (Odocoileus virginianus) are permissive to infection with SARS-CoV-2, exhibit sustained viral shedding, and can transmit the virus to members of the same species.

“The geographic distribution of this species encompasses most of North America and these animals are particularly abundant near urban population centers located in the eastern U.S.,” writes the team. “Moreover, white-tailed deer can form social groups, a contact structure with the potential to support the intraspecies transmission of multiple pathogens.”

What did the researchers do?

The USDA/APHIS/Wildlife Services National Wildlife Disease Program (NDWP) surveils a variety of pathogens in wildlife species across the U.S. In January 2021, Shriner and colleagues leveraged this resource to begin a pilot serosurveillance program for SARS-CoV-2 exposure in white-tailed deer. 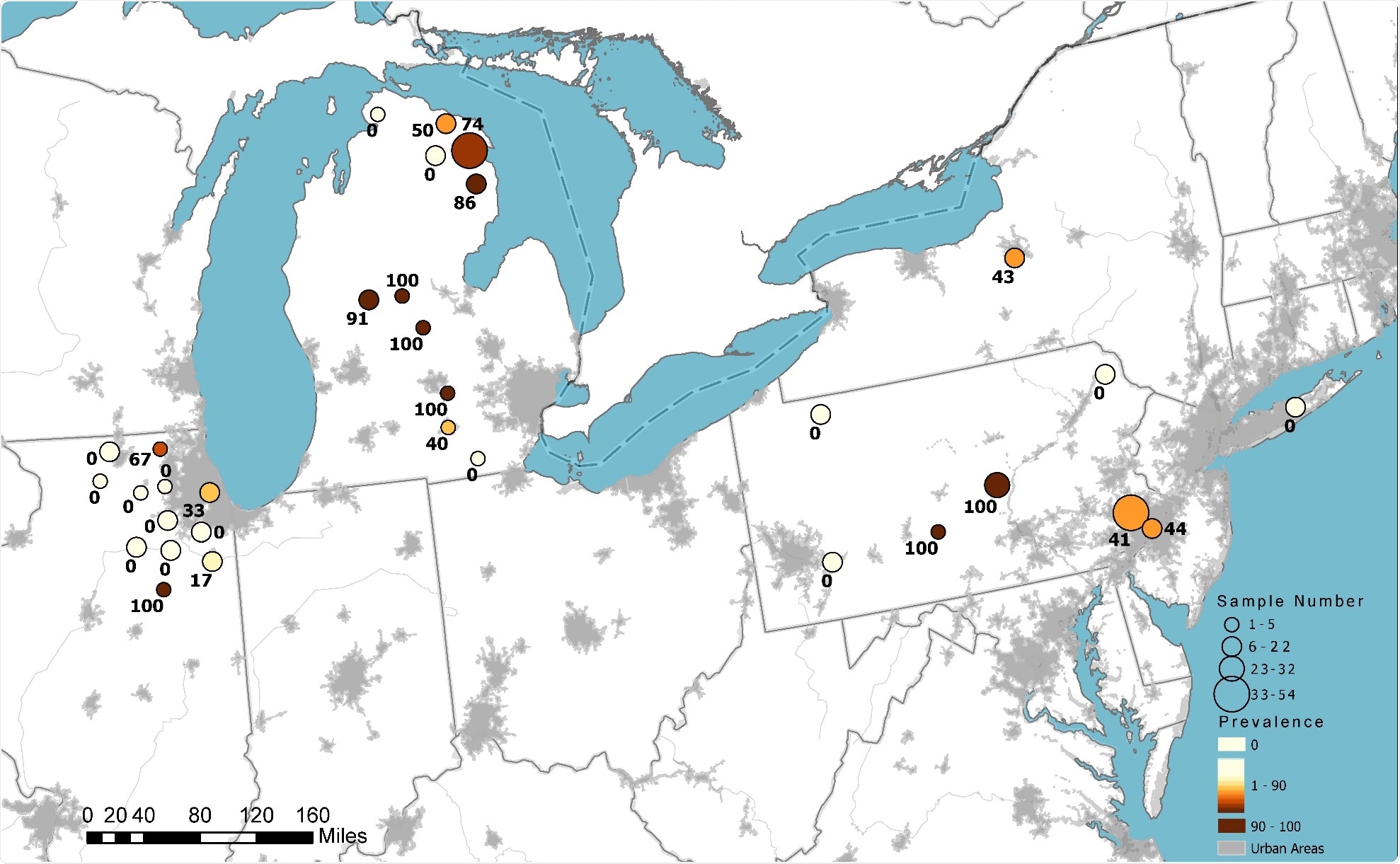 SARS-CoV-2 antibody detection in white-tailed deer sampled in 2021 in the United States. Circle size indicates the relative number of samples tested. Color represents the relative seroprevalence, and numbers are the specific prevalence in a county.

A total of 385 post-pandemic samples were collected between January and March 2021, including 113 from Michigan, 142 from Pennsylvania, 101 from Illinois and 29 from New York.

Since the NWDP maintains extensive wildlife sample archives across multiple species, the team used this repository to select 239 white-tailed deer samples collected between 2011 and 2020 across five states: Illinois, Michigan, Pennsylvania, New York and New Jersey. The majority (182) of archive samples were from 2018-2020 (pre-and early pandemic).

What did they find?

The sVNT results showed high concordance with the VNT results; all 24 positive and 24 negative test results from the 2021 samples were concordant between the sVNT and VNT screens.

The lowest seroprevalence was observed in Illinois (7%), and the highest was in Michigan (67%). Seroprevalence in New York and Pennsylvania was intermediate, at 31% and 44%, respectively.

“Overall, these results indicate that the white-tailed deer populations examined in Michigan, Pennsylvania, Illinois, and New York were exposed to SARS-CoV-2,” writes the team.

The researchers point out that multiple activities could bring wild deer into contact with humans, such as field research, conservation work, wildlife tourism, supplemental feeding, and hunting.

The findings reported here emphasize the need for continued and expanded wildlife surveillance to determine the significance of SARS-CoV-2 in free-ranging deer, they say.

The team also recommends SARS-CoV-2 surveillance of susceptible predators and scavengers with a high probability of interacting with the deer.

“Future wildlife surveillance should incorporate methods specifically designed to detect, isolate, and genetically characterize SARS-CoV-2 and to identify potential variants, as well as other endemic coronaviruses,” writes Shriner and colleagues.

Sally first developed an interest in medical communications when she took on the role of Journal Development Editor for BioMed Central (BMC), after having graduated with a degree in biomedical science from Greenwich University.