NHS set to give green light for ‘remarkable’ new epilepsy drug that could halve – or even banish – seizures for 17,000 British patients

A ground-breaking new epilepsy drug that cuts the frequency of seizures by at least half is set to be given the green light on the NHS. In some patients the drug – called cenobamate – can even banish seizures altogether, transforming their quality of life.

About 17,000 epilepsy patients could benefit from the new tablet, which experts expect will soon be approved by the National Institute for Health and Care Excellence, the NHS drug spending watchdog.

Doctors have hailed the pill as the biggest breakthrough in epilepsy treatment in a decade.

It will be used to help desperate sufferers who have failed to get better on existing medicines and whose lives are blighted by dozens of daily seizures. 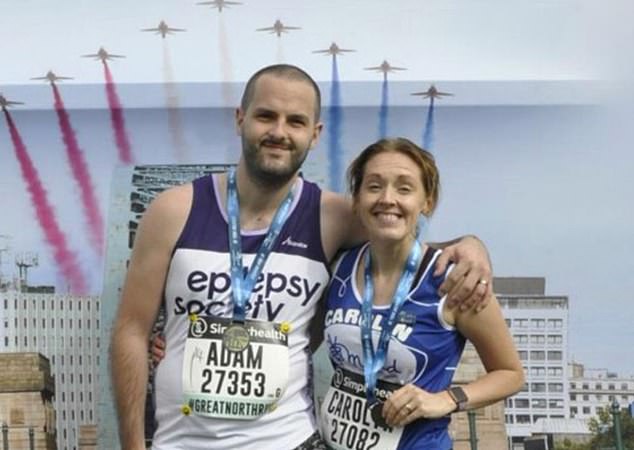 A ground-breaking new epilepsy drug that cuts the frequency of seizures by at least half is set to be given the green light on the NHS. Pictured: Adam Smith, pictured with wife Caroline, had been suffering up to 50 seizures a day and was one of the first patients in the UK to benefit from the new drug

Leading British experts say cenobamate, also called ontozry, could be life-changing. Dr Rhys Thomas, honorary consultant neurologist at the Royal Victoria Infirmary in Newcastle upon Tyne, says: ‘Many of these people may effectively have been told they will have epilepsy seizures for the rest of their lives.

‘But some see a remarkable improvement on this drug. Being seizure-free has a huge impact on them – it means they can drive again, hold down a job or even just make a cup of tea without constantly worrying when the next one will strike.’

Some 600,000 people in the UK have epilepsy. Seizures are the most common symptom and occur when electrical impulses that ferry messages between cells in the brain get disrupted.

There are many different types of seizures, but the most common is what’s known as focal onset seizures – which begin in one side of the brain, and patients are generally conscious.

Focal onset seizures often spread to both sides of the brain and develop into a different type of seizure during which patients may jerk quickly, with muscles turning stiff. Some can lose consciousness.

The episodes claim roughly 1,000 lives a year in the UK, often as a result of seizures happening at a dangerous moment.

It’s estimated that up to a third of patients do not fully respond to drugs, with some ending up having complex surgery to remove the part of the brain affected.

The last big advance in treatment was the launch in the UK a decade ago of Keppra, an anticonvulsant.

During clinical trials with cenobamate, the drug was given to patients with focal onset seizures every day for 12 weeks and the results compared with a dummy pill. The results, published in The Lancet Neurology, showed it more than halved seizure rates in up to 64 per cent of patients who had not responded to other treatments.

It’s not clear exactly how it works but it is thought to dampen abnormal electrical activity in the brain. NICE is expected to recommend the drug be used in patients who are still suffering frequent attacks, despite being on at least two existing treatments.

Adam Smith, 32, a child services worker from Newcastle, was one of the first patients in the UK to benefit from the new drug.

He was diagnosed with epilepsy at the age of ten, when regular seizures left him paralysed down the right side of his body up to ten times a day. By the time he was in his 20s, Adam was experiencing as many as 50 seizures a day, each lasting up to 40 seconds.

In November 2020 he was enrolled in the cenobamate trial and says the effects have been life-changing. He went eight months without a single seizure, and although they do still sometimes occur, they are much less frequent.

And he has been able to come off almost all other medicines, freeing him of debilitating side effects.

He says: ‘The doctors are still playing around with my doses and I have the occasional seizure. But I’m in a much better place than I’ve been in a long time. I’ve gone back to work full-time, and got a new job and a promotion. And because I’m on fewer medications, I have more energy to spend time with my wife, my son and my dog.’