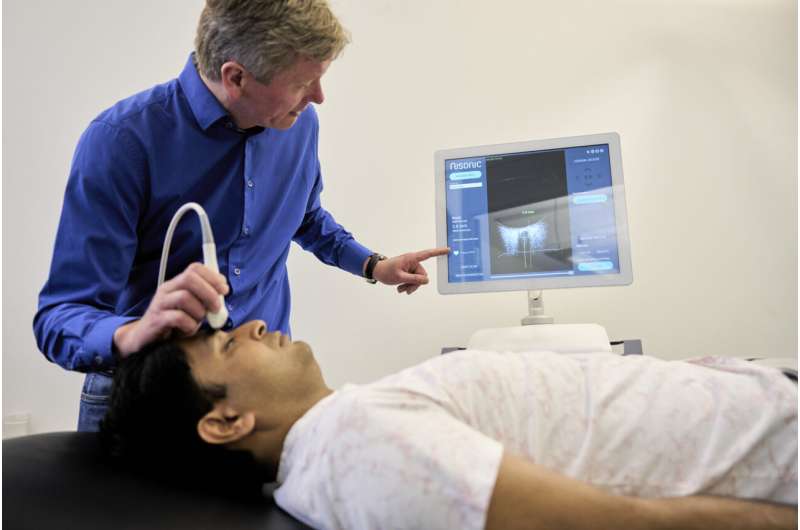 A new invention may be on the verge of replacing a costly cranial surgical procedure currently being performed on some traffic accident victims and other patient groups. The ultrasound-based technology has now been granted CE approval for the European market.

“We’re through the eye of the needle on this one,” says Tormod Selbekk. Selbekk is Head of Technology at the spin-off company Nisonic AS. He is also co-inventor of the new device, and was previously a research scientist in medical technology and ultrasound at SINTEF, where the idea was born.

“Increased intracranial pressure (ICP) or brain pressure, can result in brain damage and can be caused by either accidents or illness,” he says.

It is important in all cases to detect brain pressure increases as soon as possible, in order to make treatment easier and more effective. One treatment option may be as straightforward as the timely administration of diuretic drugs.

Brain pressure is currently measured directly using a sensor or via a drain that is inserted into the patient’s brain tissue through a hole the cranium. The procedure must be carried out in an operating theater. It is expensive, onerous and, not least has a small risk of side-effect for the patient.

The new ultrasound scanner, called Nisonic P-100, can relieve the burden on hospitals and offer patients more sensitive treatment. It is equipped with built-in software that automatically processes the ultrasound images. The device makes it possible for doctors rapidly to determine whether a patient may be developing dangerous increases in brain pressure. The technology is based on an algorithm that interprets ultrasound images of the patient’s optic nerve sheath, which changes its dimensions in response to increases in intracranial pressure.

Achieving CE marking approval for the Nisonic P-100 technology has been a demanding process, but the technology has recently been passed by the various control agencies and was given the green light.

“We’re all very pleased about this,” says Selbekk. “This last year has been particularly challenging because the EU has recently amended its CE marking approval legislation for medical equipment. On top of this, we’ve had to deal with the effects of the COVID-19 pandemic. In spite of these issues, we’ve succeeded in the space of just over two years in advancing our prototype and achieving approval as medical equipment,” he says.

This means that not only can the technology now be used in hospitals throughout the EU, but it will also be easier for us to gain access to large and growing U.S. markets in the future. The market for ICP detection and monitoring equipment is expected to increase significantly in the years ahead. Several reports have estimated a market valued at USD 270 million, with the biggest levels of annual growth in the field of ultrasound detection. Nisonic is thus ideally positioned to take advantage of a future growth area.

Eirik Helseth is a Professor and Head of Neurosurgery at Oslo University Hospital, Ullevål. He is principal investigator in a clinical research study, in which ultrasound images of the optic nerve are recorded in patients suffering from severe head injuries. The collaboration in the research project makes it possible for Nisonic to receive anonymized ultrasound images and ICP measurements for the further development of the methods..

As part of a standard procedure, these patients have had a sensor surgically inserted into their brains in order to monitor intracranial pressure. The aim of the research project is to assess whether processed ultrasound images of the optic nerve captured by Nisonic’s technology can provide a reliable measure of brain pressure.

“Current technology only enables us to make reliable measurements of intracranial pressure with the help of a sensor, or via a drain, that is inserted into the patient’s cerebroventricular (brain cavity) system,” says Helseth. “Both methods require admission to a hospital’s neurological department and a surgical procedure in order to insert the pressure sensor or drain. If ultrasound images of the optic nerve prove to be a reliable method of measuring ICP, this will open opportunities for the method to be applied not only in all other hospital departments, but also in GP surgeries and ambulances. This will be fantastic—and a global sensation,” he says.

The more data, the better the result

However, Helseth is keen to point out that the equipment can never be better than the data provided to the algorithm.

“It is essential that the equipment is used in many hospitals so that we can obtain even more patient data to work with,” he says. All medical professionals know that such equipment has to be tested on a large number of patients before reliable measurement data can be obtained. For example, there may be differences in optic nerve sheath structure between men and women, and among different age groups.

“This is why the Neurological Department at Ullevål is assisting Nisonic with its research and data gathering. We have great faith in the approach and the technology,” says Helseth.

Nisonic is now on the lookout for more capital investment and business partners who can help the company realize its overseas growth plans.

“If we succeed in establishing our method for the non-invasive monitoring of ICP, market assessments have indicated that there is significant interest among clinicians in hospitals in Europe and the U.S., and a high economic potential for the technology,” says Selbekk.

The company has succeeded with the development of Nisonic P-100, by collaborating with several Norwegian contributors. These include ultrasound scanner suppliers Vitacon AS, which has provided key assistance in connection with the CE marking approval process; Medistim ASA, which specializes in ultrasound imaging linked to cardiac surgery; and Aurotech AS, based in Tydal, which has provided hardware. The Nisonic P-100 is at large an entirely Norwegian product.

In use in Stockholm

The first Nisonic system is already on its way to the Bragée clinic in Stockholm, which is collaborating with the Karolinska institute in clinical research. Here, the equipment will be used for research into patients suffering from chronic fatigue syndrome (ME).

Swedish researchers are working with a theory that ME patients also exhibit elevated intracranial pressure. Nisonic’s equipment will be used to measure the diameters of ME patients’ optic nerve sheaths, as well as those of a control group. Selbekk says that these measurements will then be compared with diameters measured using magnetic resonance imaging (MRI) .

This research will provide Nisonic with even more patient data, which will further improve the system’s algorithms.

“The more patient data we have, the better the equipment will be. This is because the method is based on deep learning and neural networks, which are branches of the field of machine learning and artificial intelligence,” he says, adding;