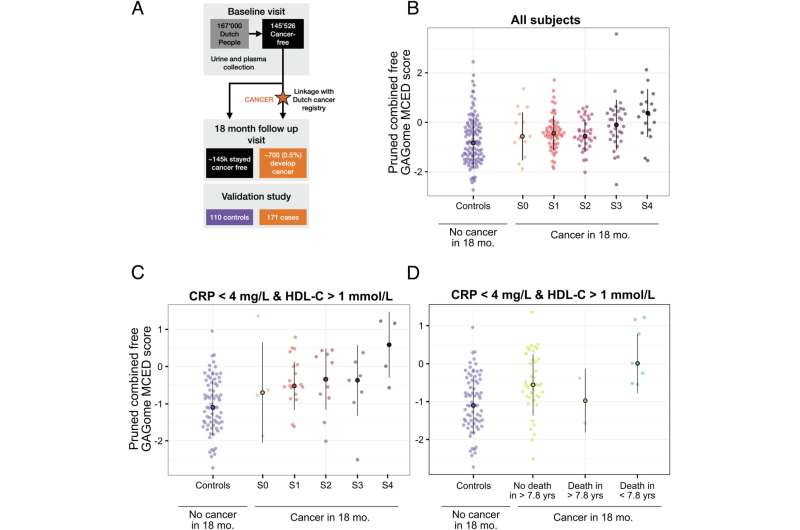 Cancer is one of the deadliest diseases in the world and is more difficult to cure when detected at a late stage.

When cancer is detected at an early stage, the rates of survival increase drastically, but today only a few cancer types are screened for. An international study led by researchers from Chalmers University of Technology, Sweden, shows that a new, previously untested method can easily find multiple types of newly formed cancers at the same time—including cancer types that are difficult to detect with comparable methods.

Finding effective methods for early detection of several types of cancer at the same time, so-called Multi-Cancer Early Detection (MCED), is an emerging research area. Today’s established screening tests are cancer type-specific, which means that patients need to be tested for each cancer type separately. Emerging MCED tests under development are usually based on genetics, for example measuring DNA fragments from tumors circulating in the blood. But DNA-based methods can only detect some types of cancer and have limited ability to find tumors at the earliest stage, so called stage I.

New method based on human metabolism

Now, in an international collaboration, researchers from Chalmers have developed a new method for multi-cancer early detection that is instead based on human metabolism. The results, which have been published in the scientific journal PNAS, uncover new opportunities for cheaper and more effective cancer screening. In a study totaling 1,260 participants, the researchers first discovered that the new method could detect all 14 cancer types that were tested. Next, they showed that twice as many stage I cancers in asymptomatic healthy people can be detected with the new method compared to the emerging DNA-based MCED tests.

“This is a previously unexplored method, and thanks to the fact that we have been able to test it in a large population, we can show that it is effective in finding more stage I cancers and more cancer types. The method makes it possible to find cancer types that are not screened for today and cannot be found with DNA-based MCED tests, such as brain tumors and kidney cancer,” says Francesco Gatto, who is a visiting researcher at the Department of Biology and Biological Engineering at Chalmers and one of the study’s authors.

The method is based on a discovery by Dr. Francesco Gatto and Prof. Jens Nielsen at Chalmers almost ten years ago: that so-called glycosaminoglycans—a type of sugar that is an important part of our metabolism—are excellent biomarkers to detect cancer noninvasively. The researchers developed a machine learning method in which algorithms are used to find cancer-indicating changes in the glycosaminoglycans. The method uses comparatively small volumes of blood or urine, which makes them more practical and cheaper to use.

“The fact that the method is comparatively simple means that the cost will be significantly low, ultimately enabling more people to have access to and take the test,” says Francesco Gatto.

In the next step, the researchers hope to be able to conduct a study with even more participants to further develop and confirm the method’s potential for screening use.

“This is a ground-breaking study that gives us hope that one day society will be able to create screening programs that can detect all cancer types early,” says Francesco Gatto.

“To be able to find more cancer cases early, we know that new tools are needed. These results are very promising because of the demonstrated higher sensitivity across more types of cancer at stage I, using a cost-efficient and accessible technology,” says Dr. Eric Jonasch, MD, Professor at The University of Texas MD Anderson Cancer Center and co-author of the study.

The article “Non-invasive multi-cancer early detection using glycosaminoglycans” has been published in the scientific journal Proceedings of the National Academy of Sciences (PNAS).

The method has already taken the step into society through the start-up company Elypta, which is one of Chalmers Ventures’ portfolio companies. Elypta is based on the research presented in the scientific study and focus on developing and commercializing MCED tests as well as a test for recurrent kidney cancer. In addition, Elypta has developed the measurement methods used to support the study analysis.

More about the research

The study shows that a method based on analyzing changes in glycosaminoglycans—a type of sugar that is an important part of our metabolism—can be used to detect several different cancer types at an early stage from the same blood and urine sample, even cancer types that are difficult to detect with other methods.

The researchers chose to test 14 different cancer types, representing the majority of newly diagnosed cancers, and all 14 types could be detected with the new method. 1,260 people participated in the study, both healthy and previously diagnosed with cancer. With this new method of multi-cancer early detection (MCED), twice as many cases of cancer at its earliest stage (stage I) in otherwise asymptomatic healthy people could be detected compared to other DNA-based MCED tests under development.

Journal information:
Proceedings of the National Academy of Sciences