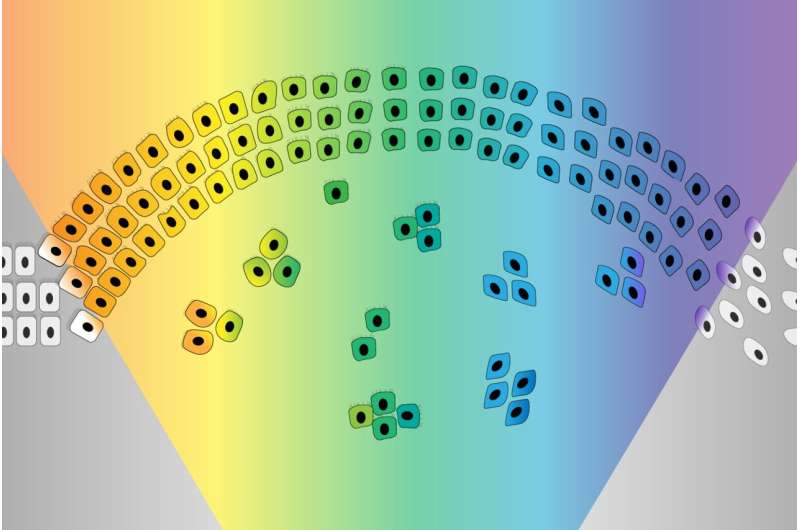 Cancer is at its most deadly when it spreads and forms tumors in new tissues. This process, called metastasis, is responsible for the vast majority of cancer deaths, and yet there is still a lot that researchers do not know about how and when it happens. Whitehead Institute founding member Robert Weinberg, also the Daniel K. Ludwig Professor for Cancer Research at the Massachusetts Institute of Technology, studies the mechanisms behind metastasis. One such mechanism is a process called the epithelial-mesenchymal transition (EMT), which causes epithelial cells, which normally stick tightly together, to lose their cohesion, enabling them to move around and even invade nearby tissue. This EMT program also operates during embryonic development. Cancer cells can co-opt this process and use it travel from their original tumor site to distant tissues throughout the body. Some of the cancer cells that spread are able, on rare occasions, to form new tumors in these tissues—metastases—while the great majority of these cells remain dormant after entering the distant tissues.

New research from Weinberg and postdoc Yun Zhang shows that cells change in diverse ways through the actions of the EMT, which can influence whether cells are able to form new tumors after they spread. The work, published in Nature Cell Biology on April 11, 2022, also identifies two regulators of the EMT and shows that loss of each regulator leads to a different metastatic risk profile.

“Using triple negative breast cancer as a model, we are trying to go a bit deeper into understanding the molecular mechanisms that regulate the EMT, how cells enter into different EMT intermediate states, and which of these states contribute to metastasis,” Zhang says.

The EMT was originally imagined as a sort of binary switch, in which cells start out epithelial and become mesenchymal, much like a light switch being flicked from off to on. However, researchers are learning that the EMT works more like a dimmer switch that can be shifted along a spectrum of brightness. Cells that undergo the EMT usually end up in hybrid states between the epithelial and mesenchymal extremes. These cells in the middle of the spectrum, which have some characteristics of each extreme, are called “quasi-mesenchymal” cells, and it turns out that they–rather than cells that become fully mesenchymal–are the most capable of metastasizing and forming new tumors throughout the body.

Weinberg and Zhang set out to better understand the EMT spectrum and what controls cells’ movement along it. First, they compared epithelial cells to each other and found that some were more plastic or prone to transitioning along the EMT spectrum than others. They also used the CRISPR gene editing tool to screen for genes that might be regulating the cells’ plasticity. If researchers can learn what makes a cell become quasi-mesenchymal—posing a high risk for metastasis—they might be able use this information, at some time in the future, to develop strategies to prevent cells from entering this high-risk state.

The CRISPR gene screen turned up a number of molecules that seemed to influence cells’ epithelial-mesenchymal plasticity. Two groups of these molecules had especially strong effects: PRC2, a complex that operates in chromosomes to silence or inactivate genes, and KMT2D-COMPASS, a complex that helps activate genes. Both complexes help to keep cells in a stable epithelial state. Loss of either complex makes cells more prone to moving along the EMT spectrum.

The researchers then determined how the loss of either complex enables the EMT. PRC2 normally silences several key EMT-related genes. When PRC2 is lost, those genes activate, which in turn sensitizes the cell to a signal that can trigger the EMT. The loss of KMT2D-COMPASS affects how well PRC2 can bind its targets, leading to the same signal sensitivity. In spite of the similar mechanisms at play, the loss of PRC2 versus KMT2D-COMPASS leads cells to transition to end up in different EMT states, an exciting finding for the researchers. Cells without KMT2D-COMPASS became fully mesenchymal, while cells without PRC2 became hybrid or quasi-mesenchymal. Consequently, cells without PRC2 were much more capable of metastasis than cells without KMT2D-COMPASS (or cells in which both complexes were active) in mouse models. When the researchers looked at historical data from breast cancer patients, they observed the same pattern: people with faulty PRC2 component genes had worse outcomes. These findings provide further evidence that cells in the middle of the EMT spectrum are most likely to metastasize.

This work supports the understanding of the EMT as a spectrum rather than a simple switch, and shows that different EMT regulators can program cells to transition to different parts of the EMT spectrum. Additionally, the finding that loss of PRC2 is linked to metastasis has implications for cancer drugs currently in development that work by inactivating PRC2. Benefits of the drugs may outweigh risks for patients with certain types of cancer for which PRC2 is an effective target. However, Weinberg and Zhang caution that researchers leading clinical trials of PRC2-targeting drugs should be careful about selecting patients and monitoring outcomes. In the types of cancer cells that the researchers looked at, even temporary PRC2 inactivation, such as from a therapy trial, was sufficient to trigger cells to become EMT hybrids with increased metastatic capacity.

Weinberg and Zhang intend to continue exploring the genes identified in their CRISPR screen to see if they can identify other hybrid states along the EMT spectrum, in which cells have different combinations of epithelial and mesenchymal features. They hope that by deepening their understanding of the gene expression profiles of cancer cells associated with different EMT trajectories, they can contribute to the development of therapies for people with potentially metastatic cancers.