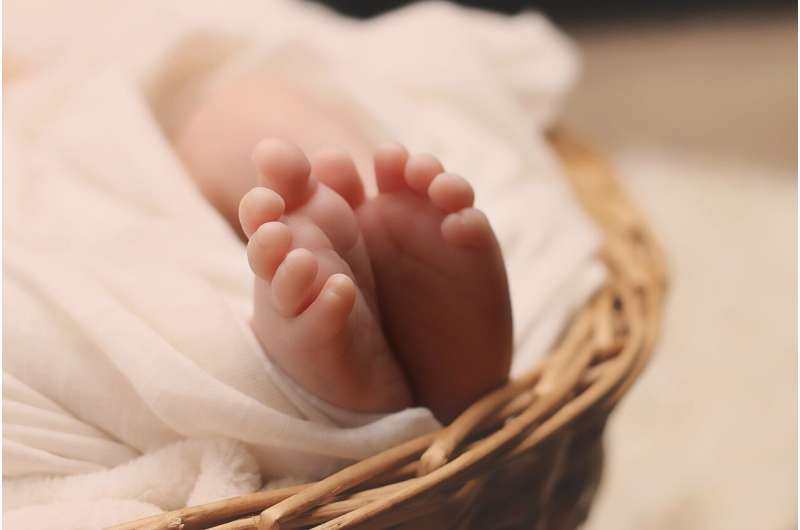 Prior to the COVID-19 pandemic, birth rates in the UK had already declined to historically low levels. The most recent data published by the national statistical offices suggest a short-term decline in births in England and Wales, and Scotland, but little change in Northern Ireland, following the first COVID-19 lockdown. In Scotland and Northern Ireland the number of births was back up to pre-COVID levels from March 2021 onwards.

The overall effect of COVID-19 on UK fertility may be small in the longer run, due to counteracting effects among different population subgroups, and the fact that many births that are postponed can be caught up in later months and years.

Using historical evidence from previous baby booms and busts, the study team from the University of Southampton and the University of St. Andrews created four possible scenarios for the effects of the pandemic on birth rates. While three out of four of their projected scenarios suggest that birth rates will decline over the next three years, one scenario suggested an increase.

The research team, led by Professor Ann Berrington at the University of Southampton, has examined fertility trends in the UK as part of the ESRC FertilityTrends project and the ESRC Centre for Population Change. They have found that the influence of the COVID-19 pandemic on fertility depends on a woman’s age and whether she already has children, making predicting future childbearing complex. For example, a lack of socializing during national lockdowns and increased uncertainty caused by the economic fallout of the pandemic may make younger people less likely to have children. For older, established couples, though, more time spent together could mean they are more likely to have a child or more children. Parents have faced particular challenges during the pandemic, especially when they have had to take on childcare during school and nursery closures, and this could affect their decision on whether or not to have more children.

Evidence from the “pill scare” in the late 1970s, where changes in contraceptive pill use during this time period were followed by short-term changes to the birth rate, suggests that it is older people who are most likely to have more children during these “shock” events. Among slightly older women, and those who already have a child, the pandemic could increase the likelihood that they would have a child, for example through changes in work-life balance caused by COVID-19.

Professor Berrington comments on the findings, “Predicting future numbers of births is important for planning. Predictions are used for things like maternity services, schools, and financial commitments through the welfare system. There is obviously a lot of uncertainty in predicting human behavior after a pandemic, so it is challenging to make predictions of the effect of COVID-19 on future fertility rates.”