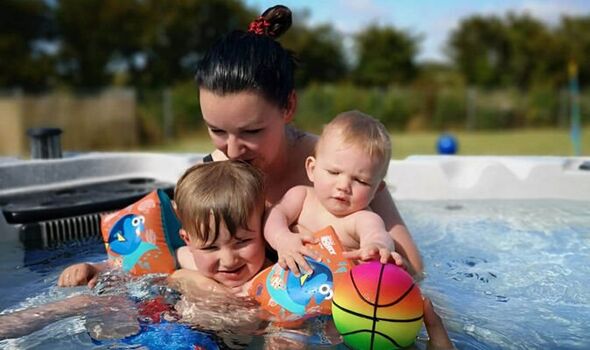 But while everyone else in the picture was smiling, Amie had been drawn with a sad face. When Pete asked why, Dylan simply replied, “because mummy’s sad now”. “That’s when I knew I needed to get help,” says Amie, 37, who runs Kind Kids Book Club (kindkidsbookclub.co.uk).

She had been suffering from ­postnatal depression (PND) for months, but until then she hadn’t realised how bad it was.

And Amie’s not alone. Recently, broadcaster Kate Lawler, 41, spoke about having PND, following the birth of her daughter Noa, 14 months.

“I hit rock bottom. When I was in the deepest, darkest depths of PND, I had terrible thoughts about what I might do to myself and Noa,” said Kate.

Mental health charity Mind praised her for speaking about the issue, which affects one in seven women.

“When those in the public eye like Kate share their experience of mental health, it can encourage others to do the same,” says Stephen Buckley, head of information at the charity.

Amie, too, was encouraged to hear Kate speaking about the issue.

“It’s so important to normalise mental health issues and help remove the stigma and shame,” she says.

When Amie, of Flint, North Wales, was pregnant with Amos, she assumed her experience of having a second child would be like when she had Dylan.

“I was already a mum, so I didn’t think it would be too different,” she says.

But, unlike Dylan’s birth, her delivery with Amos was unusually quick. “I remember looking at the clock as we got into the car to drive to the hospital, and 40 minutes later I’d given birth,” she says.

Amie suffered a fourth-degree tear, the most severe, and remained in hospital for four days.

She now believes the traumatic delivery may have contributed to her feelings of depression and anxiety.

A common misconception is that PND occurs immediately after the baby is born. However, according to Mind, the symptoms can begin at any time in the first year.

When Amos was about two months, Amie became convinced she was about to die, and started ­compulsively reading about different health conditions online.

“I was checking my body as I was convinced I had cancer. It got to the point where I checked for lumps every 30 seconds.”

Amie went to see her GP as she believed she had breast cancer, despite not having any symptoms. Over the next few months she lost her appetite and her hair started falling out.

“I felt horrendous but I thought it was because I was ill – I didn’t realise it was my mental health rather than my physical health.” On the third visit to her GP for suspected cancer, the doctor asked if she wanted to talk about her mental health, and prescribed ­anti-anxiety medication.

Then, when Amie saw Dylan’s heartbreaking drawing, she sought the help of a therapist.

“I thought postnatal depression only happened just after the baby was born. I wish I’d known more about it,” she says. “I’m so grateful to my GP for spotting it and starting a conversation.”

“It was wonderful but we felt we didn’t want to go back through what we went through with Amos, so I made sure I was talking to people about my feelings and keeping my mind off my anxieties,” she says.

When Ivana and her husband Yaw had twins Henry and Morgan six years ago, she suffered postnatal depression which led to suicidal thoughts, leaving her convinced her family would be “better off” without her. Ivana, of Fife, says when the twins were born she expected to feel a rush of love and joy but instead felt numb.

“I wondered what was wrong with me,” says Ivana, 38, who also has a four-month-old son, called Yaw after his dad. She felt ashamed of her feelings and unable to confide in friends.

Meanwhile, other mothers on social media posted smiling pictures and seemed to be enjoying motherhood.

At one point, Ivana went to the GP and was prescribed antidepressants, but was too ashamed to take them as she thought it would make her a bad mother. Then one day, after suffering for eight months, Ivana had a thought about hurting one of the twins, and was so scared she locked herself in the living room. A friend came to visit and found her crying on the floor.

“I couldn’t hold it in any longer and told her ­everything,” says Ivana. Her friend was supportive, and this gave Ivana the ­confidence to start taking her antidepressants.

She was also referred for counselling, and began to feel better.

Then she opened up to other mum friends, and discovered many had experienced similar feelings.

“We had been suffering in silence,” she says.

Now Ivana is on a mission to start a conversation about maternal mental health through her blog.

“The less shame that there is around speaking about mental health, the fewer women will have to suffer like I did.”