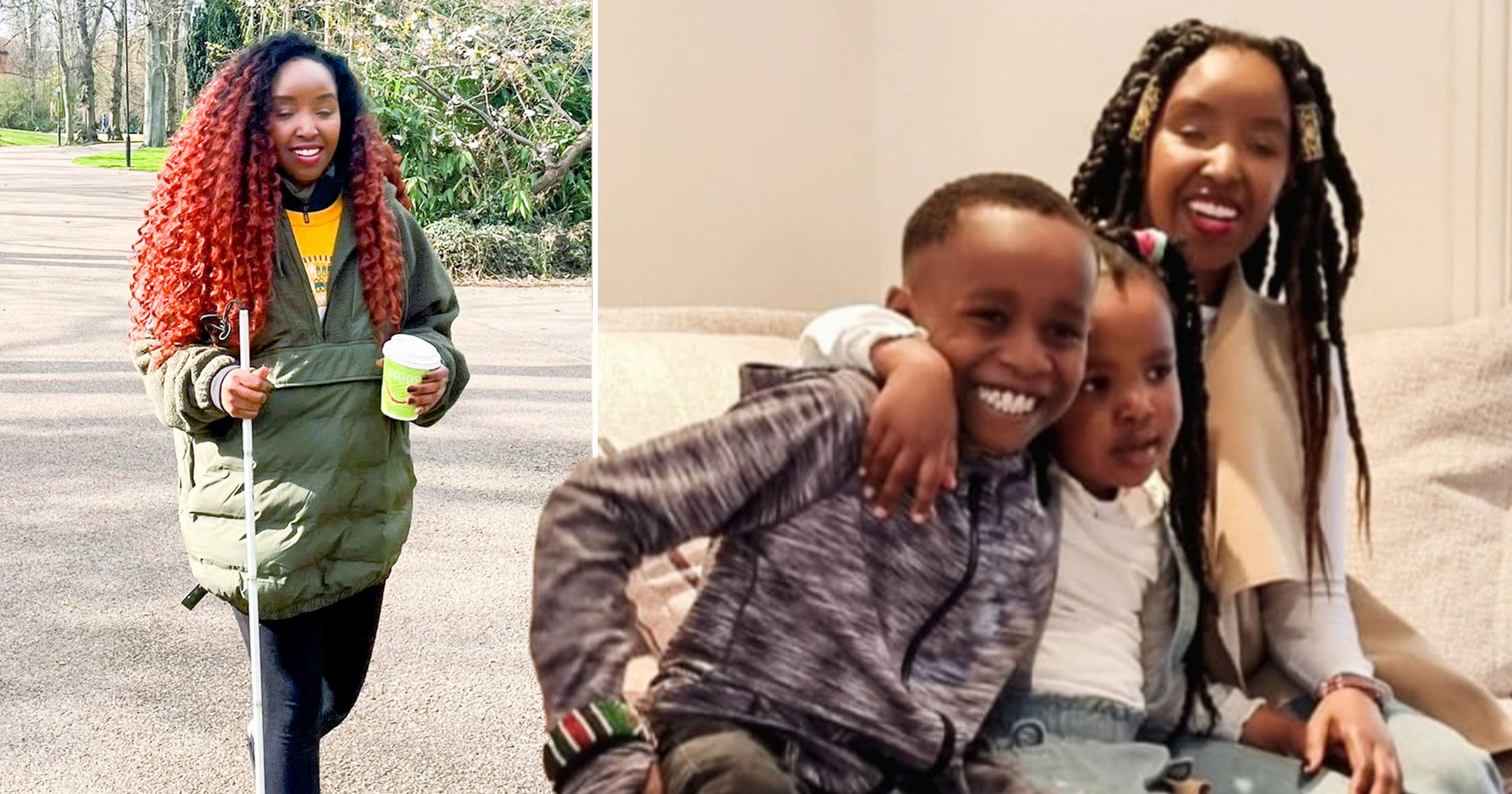 A young mum has revealed how she lost her sight after giving birth to her children.

Thankfully, the mum regained her vision, but when she had her daughter, Ari, now four, she lost her ability to see once again.

Tragically, Sylvia is still unable to see properly. Describing her vision she said: ‘Right now, it’s a blur. I can’t see the ground well when I’m stood up or anything further than a metre.’

Since losing her sight, Sylvia has managed to find ways to cope with everyday life and regularly documents her journey on social media.

The mum-of-two was diagnosed with an eye condition during her childhood, but it was treated and hadn’t caused her further issues, until she went into labour.

The mum-of-two said: ‘I never thought anything drastic would happen to my vision.

‘During childhood, it was stabilised. I had glasses and everything was fine, all the way through to adulthood.’

When Sylvia fell pregnant with Kai, she had no issues.

She explained: ‘I had a regular pregnancy with Kai, there was no sickness, but I ended up having an emergency C-section.

‘When he was seven days old, I realised I couldn’t see too well and things were blurry, but I blamed it on not getting enough sleep.

‘I carried on looking after my baby and my mum came and helped me as well. She told me she noticed I wasn’t doing a thorough job of cleaning him after changing nappies, and then when I tried to bathe him with my mum helping me, I realised I couldn’t see anything in front of me and my vision had gone.

Sylvia was given medication and thankfully, her loss of sight was temporary – lasting around three weeks.

She says: ‘I could finally see him properly at six weeks old. He’d changed so much!’

‘He wasn’t a newborn anymore. He had his eyes open and was looking straight at me.

‘But even though it got better, my vision didn’t go back to how it was.’

Then, when Sylvia’s newborn daughter was around six weeks old, she struggled to see again.

‘I got this haze of vision which was like a static in front of me, which was getting very intense, to the point where I couldn’t even see my hand in front of my face.

‘It was just a normal day, I hadn’t done anything out of the blue and I was just making myself a cup of tea, I thought to myself this is it, my eyes have finally given up.’

Sylvia has had to adopt to her new diminished eye-sight. She said: ‘I’ve found a way around things.

‘I still braid my daughter’s hair. It might not be neat, but I’m dealing with it.

‘It’s confusing for them though as one moment I can do certain things, and then I can’t pick up their clothing for them, or play specific games.

‘I couldn’t respond when they’d say, ‘Mummy look at this’, but I’ve had conversations with them about it, and my son especially knows what happens when I can’t see.

‘When I first started picking him up from school, he would guide me and tell me to be careful.

‘I feel guilty I can’t just up and leave with my kids, or get into the car and go to a play centre and let them loose, but I’ve learnt to accept what I can and can’t do.

‘My kids are a lot more independent now, but as they’ve grown, they’ve come with new challenges.

‘For instance, my daughter doesn’t like holding my hand as she’s getting older, so she wears a hi-vis jacket as it’s easier to spot her.

‘I always advise them to keep clean as I can’t help them, so I’ve made sure they’re self-aware with grooming.

‘I always want them to be at their best, so they’ve learnt to check themselves in the mirror, such as having clothes on the right way around.’

And Sylvia wants to break stereotypes of blindness. She shares her experiences on social media as a way to meet others and to be an inspiration for them.

She said: ‘People tell me I don’t seem blind, but it’s because they have an idea of what a blind person looks like or how they operate.

‘I want to help others understand blindness is a spectrum and having a disability doesn’t mean you can’t live your best life, there are adaptations that can be made.’

‘For example, I’ve learnt to use voiceover on my phone, and it reads out what’s on the screen to me and I’ve also learnt how to do my makeup without a mirror, which is very important to me.’

Going forwards, Sylvia endeavours to live her best life, and ignores the trolls who feel the need to comment on her disability.

She added: “As I’ve become more confident in my skills, I stand up for myself. I get more respect as a result.

‘People need to be more aware of how they treat others. I have people around me who support me with everything I need help with, but overall I love my independence.’