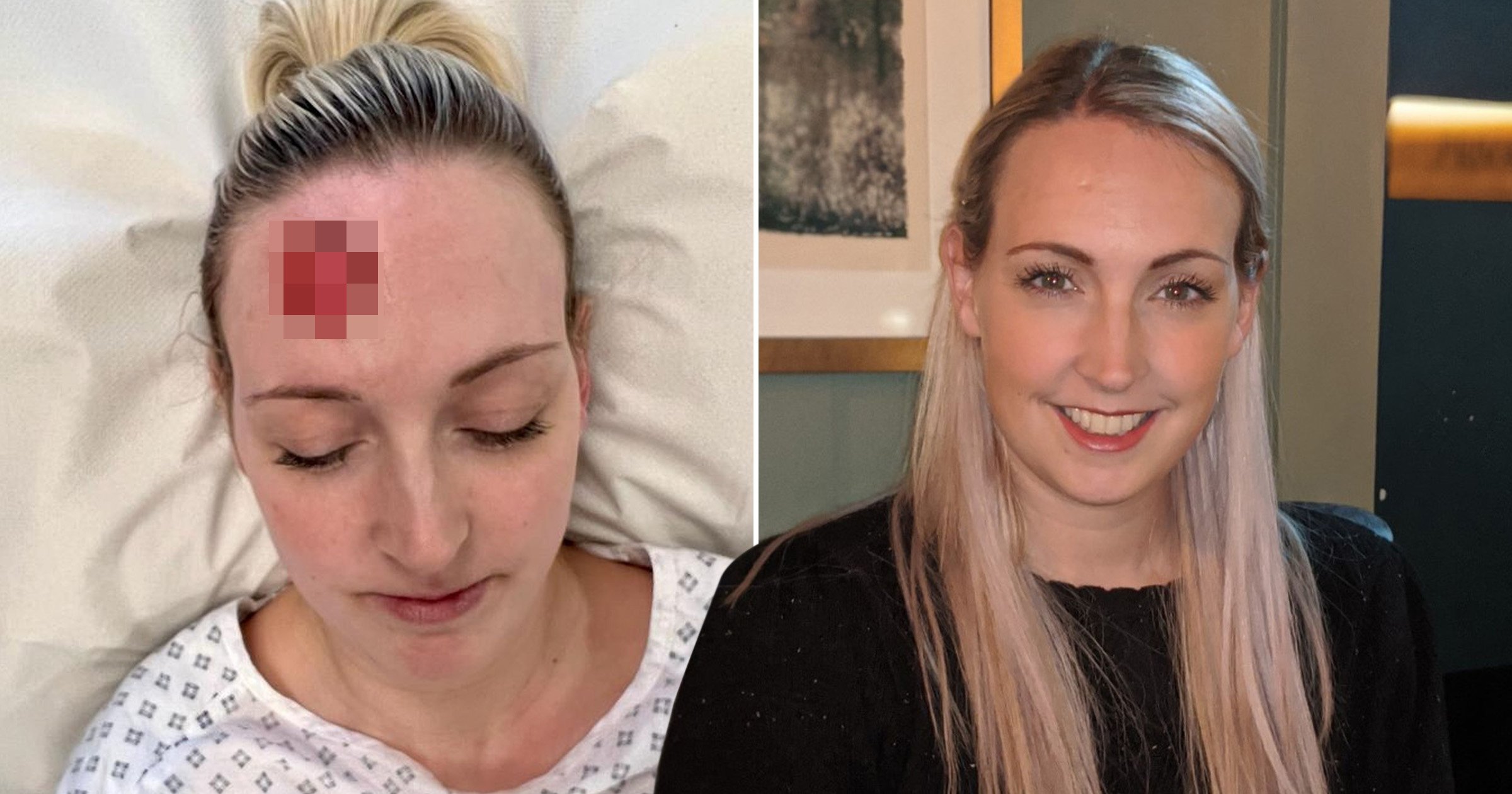 A first-time mum had to delay treatment for skin cancer after getting her diagnosis while pregnant.

After she’d given birth to her son, Rachael Rollisson needed to have a chunk of her forehead removed as the ‘tiny mark’ had grown.

Rachael had the mark since 2015, but she’d brushed it off for years until she noticed it was growing ‘more prominent’ while she was pregnant.

A suspicious mole on her mum’s back was diagnosed as low-grade skin cancer at the start of 2021, which also encouraged Rachael to get her mark checked out.

Rachael, from Redditch, Worcestershire, said: ‘I first noticed it a few years ago, but stupidly I didn’t get it checked out.

‘I thought it was a birthmark to start off with, so I didn’t really think anything of it.

‘But when I fell pregnant last year I really started noticing a difference – it started looking more prominent even when I wasn’t exercising, and it looked bigger around the edges, so it was growing.

‘I had this test where they basically take a section of it out like a hole punch and test it and the results came back that it was low-grade skin cancer.

‘I knew it could just keep spreading and growing, and I just wanted to get it out but being pregnant I didn’t want to cause any issues with that.

‘After finding out what it was and having to wait to get it removed, it was playing on my mind quite a bit.

‘While I had to wait to have the surgery I was worrying about it spreading – I’d already had it for a few years and I just kept thinking how much bigger is it going to get in that time.

‘I knew the bigger the area was the bigger the scar would be, and it was already quite a big area. If I’d left it any longer it could have gone into my eyebrow or hairline which isn’t nice to think.

‘But it was definitely worth it to have my baby here and healthy and both of us are okay now.’

With the NHS waiting time for an operation being up to two years, the 32-year-old decided to go private for surgery in which a specialist cuts away the affected area and a further layer of skin to ensure all the cancerous cells have been removed.

Just four months after Rachael and her husband Adam Rollisson, 33, welcomed their baby James, she had surgery at Solihull Hospital, on January 15.

‘I was fully awake for the surgery and that was the scariest thing,’ she recalled.

‘They injected the area with local anaesthetic, so I had quite a few injections in my head to numb it and that was probably the most painful part of it.

‘They cut the skin away and take it away for a few hours to test it and make sure they’ve got all of it.

‘They got it all in one go the first time, so I was quite lucky, and then I went back in for an hour and a half to have it sewn back up.

‘That was probably the worst bit because it was a lot of pulling and tugging of the skin, which wasn’t nice at all. The feeling of the skin being pulled over is going to haunt me.

‘They allowed me to take a picture of the hole left by the section they took out before they sewed it back up again so that was quite scary seeing that.

‘I didn’t think it would be that big of a surgery so when I came out of the surgery I was quite upset because the scar was so big, but I’m just relieved I’m in the clear now.’

After her scary experience, Rachael wants people to know that ‘it can happen to anyone’, hopes to encourage others to get their skin checked

She said: ‘I’m not really a sun-worshipper, but I do tan really easily. I wasn’t in the sun often at all, not enough to expect to have something like this anyway.

‘It’s scary because it shows that it really can happen to anyone, even if you’re not a sun-worshipper.

‘I’ve always been quite careful with sun cream, but I’ll definitely be even more careful now, especially with the baby.

‘I would just advise people to get anything different on their skin checked out definitely.’