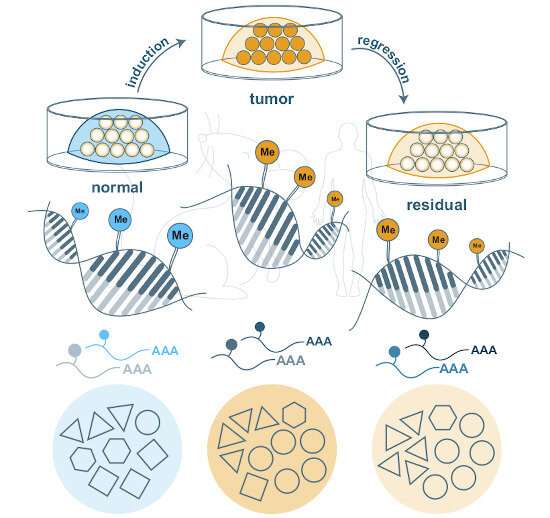 Molecular targets for therapies that could prevent breast cancer recurrence have been identified by a group of German, Norwegian and British scientists who analyzed tumor cells that proved resistant to the original treatment. Recent advances in early detection and targeted therapy have led to a growing success in treating breast cancer upon first presentation. This often is achieved by silencing tumor driving oncogenes and causing tumor regression. However, the survival of small numbers of tumor cells after initial therapy is an increasing challenge as such cells lead to subsequent recurrence of mostly incurable cancer in 20% to 40% of patients after a few years or even decades. The findings published today in Molecular Systems Biology are potentially relevant for breast cancer treatment outcomes as they can help tackling tumor recurrence.

Oncogenes are genes whose elevated expression is associated with many cancers, as a result of either mutations or changes in control over their expression. One of the main processes involved in elevated oncogene expression during tumourigenesis is altered DNA methylation, the attachment of methyl groups to DNA molecules resulting in changes in expression of underlying genes. The European team analyzed methylation changes in the small number of cells that survive initial treatment responsible for what is known as Minimal Residual Disease (MRD). MRD can proliferate following a considerable dormancy phase and thereby cause incurable relapse of the cancer. Applying advanced data intensive techniques in a mouse model of breast cancer and integrating different levels of cellular behavior, the metabolism and methylation of MRD cells were compared with the same processes in original tumor cells and normal healthy cells.

The main finding was that the resistant cells exhibited very similar metabolic behavior and methylation patterns to cells of the original tumor, but not to normal cells. However, they did not show other characteristics of the original tumor cells, such as high proliferation propensity and presence of oncogenic signaling. As such the researchers concluded that MRD cells carry some form of ‘metabolic and epigenetic memory’ of the tumor state. This finding was confirmed using transcriptomic data derived from patients after they had received neo-adjuvant therapy, which is usually a form of chemotherapy to shrink the tumor prior to subsequent surgical excision.

The researchers went on to demonstrate that memorized elevated glycolysis in MRD cells is crucial for their survival, generating the energy in the form of adenosine triphosphate (ATP) from glucose required to sustain cellular metabolism. This memory process is an obvious therapeutic target and the researchers have already identified a small molecule that inhibits that pathway in MRD without having any impact on normal healthy cells.