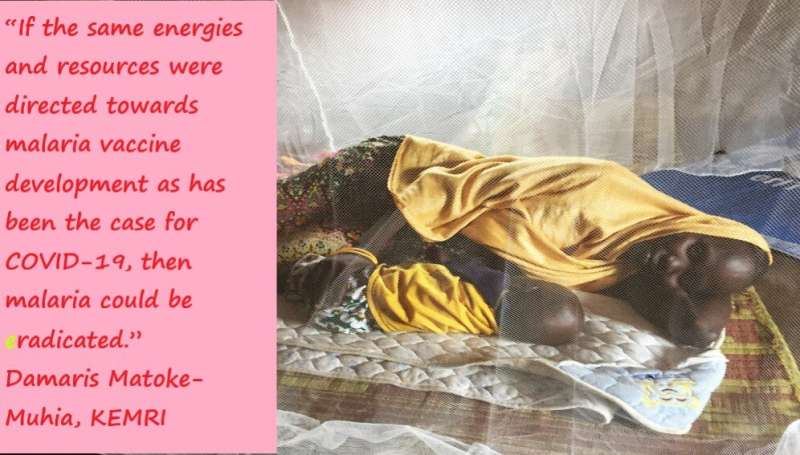 In less than a year since the World Health Organization (WHO) declared COVID-19 a pandemic, several vaccines have already been developed, with vaccination already under way in several countries.

This unprecedented speed is a great testament to the power of what science can achieve when researchers have resources and political will on their side. The world is now waiting with bated breath to see if life might return to some semblance of normal in the next few months.

But even as we celebrate these achievements, it makes me wonder why we are not seeing such progress for diseases such as malaria, which has been around for thousands of years and continues to cause major social and economic losses across Sub-Saharan Africa. We still do not have a widely available malaria vaccine and even a promising new vaccine—developed by the same team of scientists who created the Oxford/AstraZeneca COVID-19 vaccine —could be in use at the earliest by 2024.

A malaria vaccine would be vital. However, the enormous investment required to make its rollout a reality—including improved infrastructure and human resources —would most likely materialize if the disease was considered not only a regional scourge but a global pandemic. As a researcher at the Kenya Medical Research Institute withmore than ten years ofexperience working onmalaria, I would attest that if the same energy and resources were directed towards malaria vaccine development as has been the case for COVID-19, then malaria could be eradicated.

COVID-19 was first reported in Africa in February 2020. The continent has fared much better than most of the world, but it has still recorded nearly 2,600,000 cases and 24,464 deaths as of last week (5 February), according to the WHO. Meanwhile, diseases such as malaria are still the leading causes of deaths in tropical climates. In 2019, of the more than 218 million cases and 409,000 deaths globally attributed to malaria, 94 percent occurred in Sub-Saharan Africa alone, mostly in young children, says the WHO.

It is likely that malaria cases have been underreported during this pandemic. The challenges for health systems for coping with COVID-19 and malaria at the same time are onerous due to complex interactions between both diseases. Malaria and COVID-19 signs and symptoms can be similar, complicating diagnoses. Thus, malaria may go undiagnosed in people presenting with fever and testing positive for COVID-19. Symptomatic malaria-infected individuals could also be deterred from seeking healthcare because of fear of COVID-19 infection and the stigma thereafter.

Around the world, there has been overwhelming focus on COVID-19 containment. Governments, philanthropists, private companies, organizations, industries and scientists are working tirelessly and allocating seemingly endless resources in response to the virus. There is a light at the end of the tunnel: apart from resources such as diagnostic kits, drugs and ventilators, COVID-19 vaccines are already being deployed.

Certainly, creating a vaccine for malaria is not straightforward. Malaria parasites such as Plasmodium falciparum, the major cause of malaria infection, are known to be genetically complex, generating thousands of potential foreign chemicals in the body and triggering complex immune responses. More so, exposure to malaria infection does not induce herd immunity, thus making it hard to have a long-term vaccine. Herd immunity is the concept that as more people develop the ability to fight infectious diseases through either vaccination or getting the disease, the population will be protected from subsequent infections.

There has been tremendous support for malaria over the years. For example, the RTS,S/AS01 vaccine is being piloted in three African countries: Ghana, Kenya and Malawi. The vaccine is the first ever to be recommended by the WHO and other global experts for routine immunization of children in Africa. If successful, it could be scaled up to other malaria-endemic areas to protect children.

However, lack of funding, the limited number of local researchers and developers, and the technical complexity of creating a vaccine against malaria hinder its development. To move forward, major commitments are needed from governments, the private sector, industry, research organizations and academic institutions.

There are some lessons to be found in the containment of COVID-19. Prevention has been drummed nonstop, and most COVID-19 containment measures are included in the law. With malaria, a far deadlier disease, the control measures such as sleeping under insecticide-treated bed nets or spraying of houses with insecticides or access to treatment are optional. If we are serious about eliminating the disease from the continent, governments, philanthropies and donors need to strengthen malaria prevention measures.

One of the paradoxes of COVID-19 is that although it has severely disrupted health systems and set us back in our pursuit of the health-related Sustainable Development Goals, it has demonstrated the importance of strong health systems to ensure social, economic and political stability. The pandemic is a vivid reminder that health is not a reward for development but rather a prerequisite.