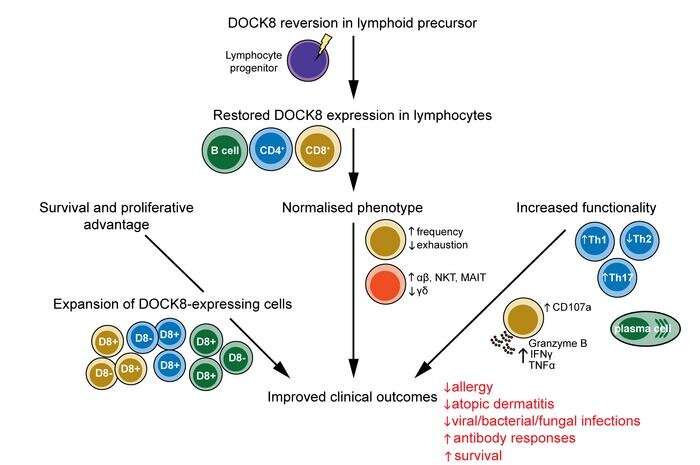 Researchers at the Garvan Institute of Medical Research have discovered that three patients with a severe genetic immunodeficiency spontaneously repaired the harmful variants in their DNA and restored normal immune function over time.

As cells grow and divide to produce new cells, DNA is copied from the parent cell to provide instructions for the new daughter cells. Random changes that occur as the DNA is copied are usually harmless but in some cases are associated with the development of diseases like cancer.

However, the Garvan-led Clinical Immunogenomics Research Consortium Australasia (CIRCA) found three patients with DOCK8 deficiency had repaired the faulty genes through a rare DNA change known as somatic reversion.

“DOCK8 deficiency is a rare, inherited condition caused by errors in the DOCK8 gene and is characterized by recurring bacterial, viral and fungal infections as well as severe allergic reactions and some cancers. Unexpectedly, one patient in the CIRCA network with DOCK8 deficiency and two overseas also underwent somatic reversion. This surprising discovery has implications for future therapies and treatments for the often-fatal disease,” says Professor Stuart Tangye, Immunity and Inflammation Research Theme Leader at the Garvan Institute and co-senior author of the findings published in today’s issue of the Journal of Clinical Investigation.

Patients with DOCK8 deficiency experience painful and debilitating symptoms that start from a very young age and can be difficult to diagnose due to the rarity of the condition.

“Symptoms of DOCK8 deficiency are typically managed with topical skin treatments and antibiotics. But for most patients to have the long-term hope of a normal life, they require a bone marrow transplant to replace their DOCK8-deficient immune cells with normal healthy cells from a compatible donor,” says Assistant Professor Cindy Ma, co-senior author of the paper.

In their study, the researchers used sophisticated genetic, molecular, cellular and functional analyses to examine the immune cells of three patients diagnosed with DOCK8 deficiency—one in Sydney and two in France.

The patients, who were between 18 and 45 years old, had been suffering from infections and rashes since shortly after birth, had each begun experiencing significant improvements in their health in the absence of significant treatments.

The researchers analyzed the genome of the patients’ immune cells and observed that some cells had undergone somatic reversion—they had accumulated random mutations within the DOCK8 gene when it was copied that reverted the harmful variations in their DNA back to the normal DNA code.

“Each patient exhibited improvements in their severe allergic disease and a reduction in the number of severe infections as more immune cells began producing the normal DOCK8 protein,” says Dr. Bethany Pillay, co-first author of the paper.

“One of the patients, a 25-year-old woman living in Sydney, experienced a general improvement in health from mid-adolescence and has had no major infections in recent years. We tracked her progress for a number of years and saw effects on the immune system similar to those of DOCK8-deficient patients who have undergone a bone marrow transplant. She was repopulating her blood stream with normal, healthy cells over time.”

DOCK8 deficiency affects hundreds of patients globally, and without interventions such as bone marrow transplants or rare “rescue events” like somatic reversion, 50% of patients die before they turn 20 years old.

One emerging approach to treating inherited immunodeficiencies like DOCK8 deficiency is gene therapy, whereby a patient’s own cells are removed and harmful gene variants are replaced with healthy versions. These cells are then injected back in the patient’s body where the risks of rejection are much lower as the cells originated in the patient’s own body.

Gene therapy has been used to successfully treat a small but growing number of genetic diseases, Professor Tangye says, however it is not currently available to patients with DOCK8-deficiency.