An Indian yoga televangelist who is an ally of Prime Minister Narendra Modi claims to have already found the cure for the new coronavirus and is offering it for sale.

Despite official warnings from the government, yogi Baba Ramdev is promoting COVID-19 kits containing traditional ayurvedic remedies, which he hails as a miracle remedy for the infectious disease.

While Ramdev and his company — named Patanjali Ayurved — have reportedly become corporate winners in India, their products have been fiercely criticized by those who argue for better regulation in ayurvedic medicine.

Ayurveda ministry officials say they had only given approval for the guru's kit of tablets and drops to be marketed as an immunity booster.

However, in a coronavirus-ravaged country, branding the "coronil" pills and tulsi as curative was too good of an opportunity to pass up for Patanjali Ayurved.

Now, the swami's kit is so sought after that it's selling on the black market alongside Gilead's remdesivir.

India, with a population of 1.4 billion, has the world's third-highest number of COVID-19 infections. There are currently more than 2 million confirmed cases and over 41,500 deaths. According to the FDA, there are currently no approved treatments specifically for COVID-19, although the agency has granted emergency use of some drugs that are already prescribed for other ailments.

This is not the first time that Ramdev has generated controversy. In 2009 and 2013, he claimed yoga "cured" homosexuality and invited members of the gay community to his ashram.

Despite that, Ramdev still has a captive audience and was a big part of Modi's campaign in 2014.

This week, the prime minister invited Ramdev to a private groundbreaking ceremony of a Hindu temple. Modi himself has promoted yoga and ayurveda, touting nutrition and fitness during the pandemic. 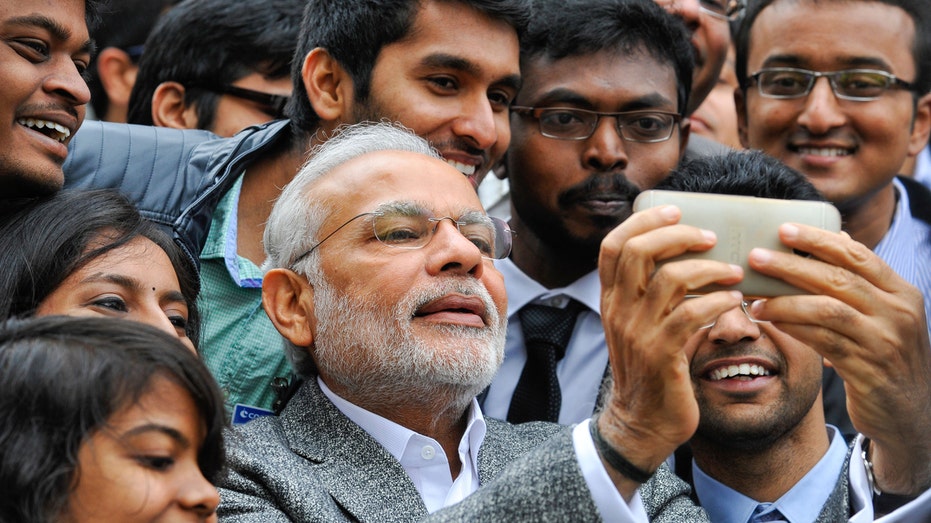 Indian Prime Minister Narendra Modi poses for selfies with Indian students during a visit at the French National Space Agency (CNES) in Toulouse on April 11, 2015.

Patanjali Ayurved co-founder Acharya Balkrishna told The Financial Times on Wednesday that members of big pharma or those questioning their methodology are just upset they had "spoiled a huge market for coronavirus medicine for them."

“They [drug manufacturers] had inflated a big balloon, we have pricked a hole in it," he said.

His company reported its highest-ever earnings last year and hopes to take on multinational competitors in the future.

Nevertheless, on Thursday Madras High Court ruled against Patanjali Ayurved regarding the use of the Coronil trademark and slapped a fine of over $13,000 for "chasing further profits by exploiting the fear and panic among the general public by projecting a cure for the coronavirus."