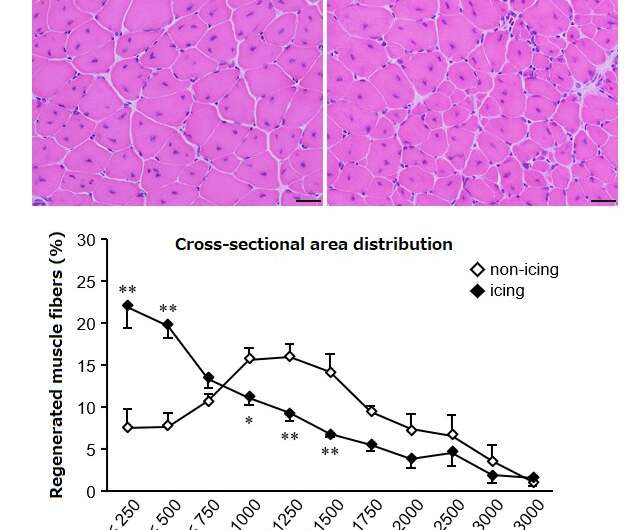 A study using a mouse model of eccentric contraction has revealed that icing injured muscles delays muscle regeneration. The discovery was made by a research group including Associate Professor ARAKAWA Takamitsu and then Ph.D. Student KAWASHIMA Masato from Kobe University’s Graduate School of Health Sciences, and Chiba Institute of Technology’s Associate Professor KAWANISHI Noriaki et al. In addition, the researchers illuminated that this phenomenon may be related to pro-inflammatory macrophages’ ability to infiltrate damaged cells. This research raises questions as to whether or not severe muscle injuries (such as torn muscles) should be iced.

These research results were published online as one of the Journal of Applied Physiology‘s Articles in Press on March 25, 2021.

Skeletal muscle injuries encompass a range of damage to muscles; from a microcellular level to a severe level. These injuries include not only those that happen during sports or schools’ physical education lessons but also external injuries that occur as a result of accidents and disasters.

‘RICE treatment’ is a common approach for skeletal muscle injuries, regardless of the extent of the injury. This acronym stands for Rest, Ice, Compression and Elevation and is often used in physical education, sports and even medicine. Ice is commonly applied regardless of the type of muscle injury, yet little is known about the long-term effects of icing.

Ice is used to suppress inflammation, however, inflammation in response to tissue injury is one of the body’s healing mechanisms. This has come to be understood as a vital response for tissue regeneration. In other words, suppressing inflammation with ice may also inhibit the body’s attempt to repair itself.

Experiments investigating the effect of icing muscles after injury have produced conflicting results. Some have reported that it delays muscle regeneration while others have stated that it doesn’t inhibit this process. However, none of the research up until now has investigated the effects of icing using an injury model that mimics common sports injuries caused by muscle contraction.

Using a mouse model of eccentric contraction injury, the current research team decided to observe the effects of post-injury icing. In this mouse model, injuries were induced to resemble severe torn muscles. 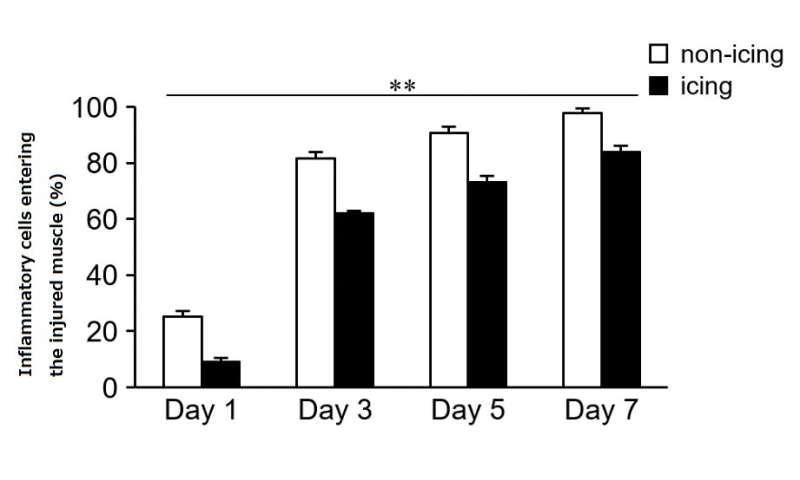 Eccentric contraction was induced by electrically stimulating the leg muscles of the mice and then exerting a stronger force during this stimulation to make the leg muscles move in the opposite direction. After this, the muscles were harvested. Icing was performed by placing polyurethane bags of ice on top of the skin over three 30 minute sessions per day, with each session being two hours apart. This was continued until two days after the injury. The icing was based on the usual clinically recommended method.

The researchers investigated the regenerated skeletal muscle two weeks after injury, comparing the icing group with the non-icing group. A significantly higher percentage of smaller regenerated muscle fibers were found in cross-sections from the icing group, with a greater number of medium to large fibers in the non-icing group (Figure 1). In other words, this revealed that skeletal muscle regeneration may be delayed as a result of icing.

Next, the researchers periodically took samples of muscle from the icing and non-icing groups of animals in order to investigate what was happening in the regeneration process up until this point.

In the regeneration process, inflammatory cells gather at the site of the injury, remove the debris from the damaged muscle and then begin to build new muscle. However, the results revealed that it is harder for inflammatory cells to enter the injured muscle cells if ice is applied (Figure 2). 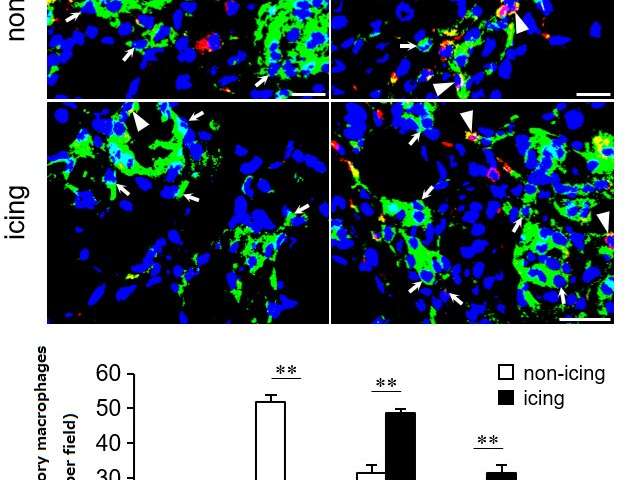 These results indicate the possibility that macrophages are unable to sufficiently phagocyte the damaged muscle when ice is applied after severe muscle injuries caused by eccentric contraction, consequently delaying the formation of new muscle cells.

Associate Professor Arakawa says, “In sports, the mantra of immediately applying ice to an injury is commonplace, regardless of the injury’s severity. However, the mechanism that we illuminated through this research suggests that not icing a severe muscle injury may lead to faster recovery. The idea of immediately cooling any type of injury is also entrenched in schools’ physical education classes. I hope that in the future, the alternative option of speeding up recovery by not cooling severe muscle injuries will become known.

“However, even though icing may disrupt the recovery process for severe muscle injuries, there is no denying the possibility that there are degrees of mild muscle injuries that can be iced. The next issue is to work out where to draw the line. We are now in the middle of investigating what effect icing has on slight muscle injuries.