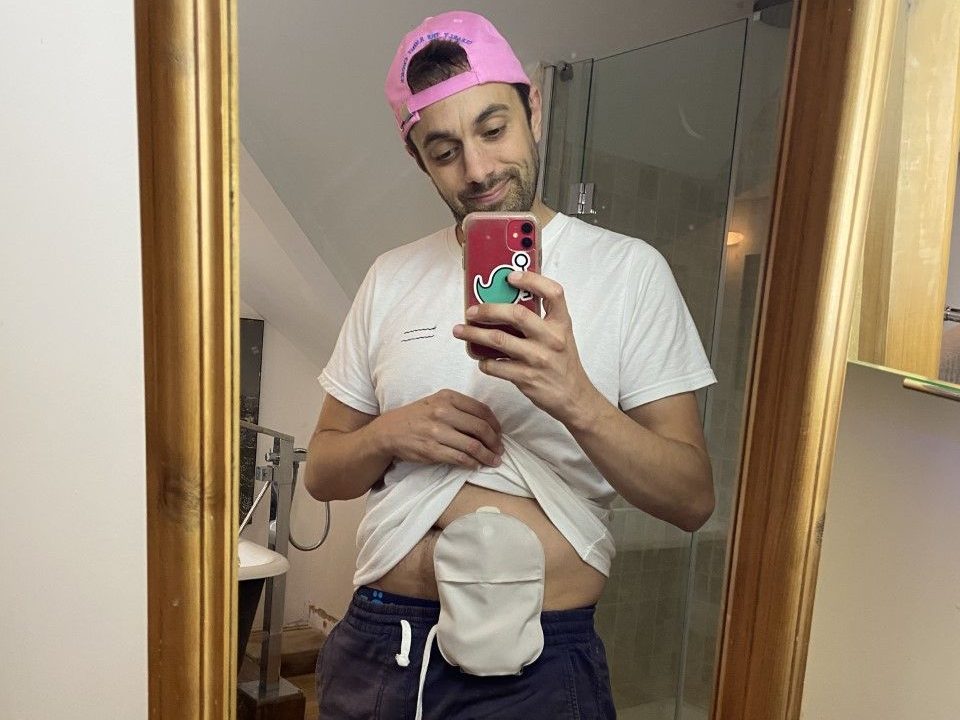 I never in a million years dreamt this would ever be my story. But it turns out that young people get bowel cancer.

And as we have unfortunately learned with the tragic passing of Dame Deborah James, young people can die of it, too.

The work she did to raise awareness of bowel cancer symptoms since being diagnosed in 2016 is impossible to quantify. In the last month of her life alone, she raised nearly £7million for a cancer charity.

I’m sure her activism has had such a trickle down effect as to impact my own journey with bowel cancer.

I first started feeling ‘off’ during Christmas 2020.

Like many of us, I was working from my house (managing Airbnb rentals and holiday-let properties across the UK), enjoying home workouts, and occasional walks with a podcast.

For 360 days of the year, I kept fit and ate clean, but for a week over the Christmas period, I took a break and enjoyed all the typical festive foods and treats.

It was then that I started to notice changes in my bowel habits.

As someone that had always been pretty much as regular as ‘clock work’ when it came to going to the toilet and having never suffered any problems beforehand, this was really unusual for me. But I brushed it off and put it down to my body adjusting to my annual burst of overindulgence.

But by the time January was in full-swing, I wasn’t only facing bowel changes, such as looser stools, constipation, and diarrhoea, but I also noticed blood in my poo.

After some encouragement from my mum, I called my GP, and was offered an appointment that very same day.

My doctor and I spoke about how it was probably just something common like piles and that a cream or medication would sort the issue, agreeing that it wouldn’t be anything serious.

To view this video please enable JavaScript, and consider upgrading to a webbrowser thatsupports HTML5video

‘Phew!’ I thought to myself.

But to take the usual precautions, the GP booked me in for a colonoscopy a few days later to check what was going on up there.

The procedure was quite painful, and I didn’t appreciate being able to see the TV screen showing the camera inside of you.

But despite this, I never thought this would be the start of the cruel journey cancer had in store for me.

Because of Covid restrictions, I had to attend my appointment alone, which was quite nerve-wracking. When the colonoscopy finished, I was taken back to my cubicle.

A nurse came in to take bloods followed by a second nurse who then came in to ask if I was with anyone and suggested that I get one of my parents to pick me up earlier and meet me in reception.

I was asked to join the doctor in the family waiting room, so we were in a private space as I was told, ‘This looks like cancer.’

A million things instantaneously rushed through my head: ‘How could I have cancer? What are my friends and family going to say? What will work say? What is my life going to be like now? I’m 33 years old. Only old people get bowel cancer, right?’

According to the UK charity, Worldwide Cancer Research, in 2020 2,700 people who were under the age of 50 were diagnosed with bowel cancer – and over 700 sadly passed away.

I went on to have a CT scan, MRI, and a sigmoidoscopy (a test that allows doctors to examine the inside of the rectum and the part of the colon, which is closest to the rectum), and biopsies all confirmed that I had a cancerous tumour the size of a golf-ball that had not only broken through my bowel wall but was close to attaching itself to my bladder.

It felt like I was in some sort of awful nightmare, and I wished someone would just wake me up.

In the space of a few hours, I went from being Nick, the health conscious, night-out-loving guy who loved spending time with friends and family, to Nick the critical cancer patient, about to undergo a six-week course of daily radiotherapy and oral chemotherapy.

Amazingly, the treatment worked, and my tumour shrunk by more than a centimetre, meaning I was able to get an operation to remove the tumour. Result!

Even though the doctors and nurses prepared me well for the operation, nothing could have made me feel ready for what was to come. I woke up with lots of scars, tubes, and machines attached to my body, and a new resident stoma bag, which I called  ‘Zippy’. It was a lot to take in, and I no longer felt like the body I woke up in belonged to me.

I developed an infection after surgery and spent nearly two weeks in hospital; it gave me time to think about what I was going through. And how there was still so much more to come. I was trying to understand the new me; having a major operation and not being able to go to the toilet properly makes you feel like a totally different person.

Pandemic restrictions at the time meant that it was already difficult to physically meet with friends and family. With an added layer of chemotherapy and a more reduced immune system, it meant I really couldn’t see anyone. It made a difficult time even more upsetting, but I focussed all my energy into getting through my treatment.

Having to be in isolation for so long was really difficult, especially as I used to be so active. Catching COVID-19 would have stopped my entire treatment, and with my immune system being so low, it could have had a real impact on my health. The risk was just too high.

The treatment made me really tired, so I spent a lot of time resting… I feel like I could be a panellist on Loose Women or part of the team at This Morning; I watched so much TV!

Further tests post-surgery found cancer cells in my blood vessels, resulting in another six months’ worth of chemo – 14 days on, seven days off, repeat. But the eight gruelling rounds of chemotherapy went well, and I had my stoma removal operation in March 2022.

Then a further scan showed a worrying nodule on my lung. I didn’t know if I had it in me to go through all this again, but the results came through on 12 April revealing that it was nothing sinister and telling me that I was now cancer free!

I couldn’t believe it. I had beaten cancer.

But not everyone is so lucky.

There’s a worrying, yet common, misconception that bowel cancer is an old person’s disease. That’s why I’m on a mission to raise awareness that bowel cancer can affect people of all ages and that we should all be checking our poo.

Thanks to Worldwide Cancer Research’s incredibly generous ‘Curestarters’ – donors, supporters, and fundraisers – the charity has supported over £9million worth of bowel cancer research worldwide, including £4.5million worth based right here in the UK, right on our doorsteps.

Although survival rates for bowel cancer have improved dramatically in the last few decades, it is still the second biggest cancer killer.

I’m set to have my next set of scans and colonoscopy in July. After these, I’ll be having a full body scan every six months, as well as an annual colonoscopy thereafter.

What are the main symptoms and signs of bowel cancer?

The three chief symptoms of bowel cancer are:

I’m definitely feeling more emotional about everything I’ve been through now that I’m cancer free and have time to stop and reflect. I was so transactional about what I was doing: appointments, medication, restricted diet, sleep, and repeat.

But now that it’s over and that I’ve had time to reflect, it’s all starting to sink in.

In a post-pandemic world, where we’re all getting used to the ‘new normal’ I’m also discovering what my ‘new normal’ is – post cancer.

I’m not able to exercise yet, but I’m getting used to being able to actually go to the toilet again, see my friends, be back in London in my flat, and I’m learning so much about myself every day.

Together, we can end cancer. Join me, and thousands of others, and become a Curestarter today, by visiting: worldwidecancerresearch.org.

Nick is a supporter and Curestarter of the charity, Worldwide Cancer Research, which funds pioneering discovery research all over the world to start new cures for all cancers.