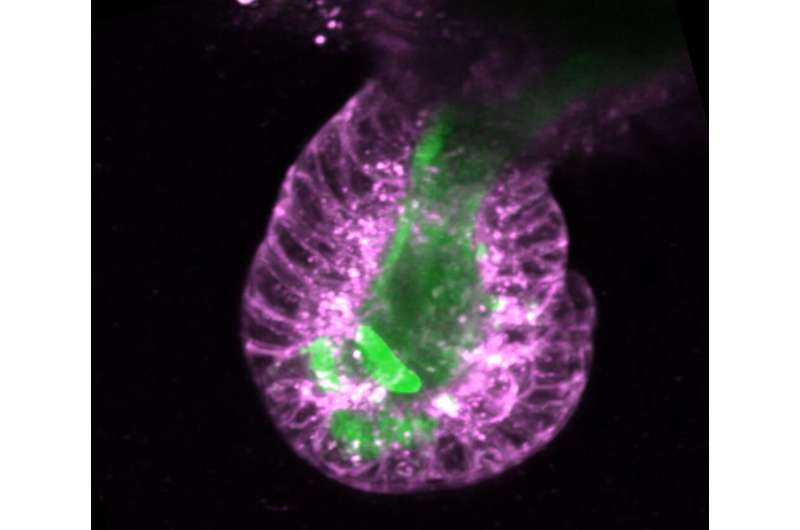 Researchers at the University of Gothenburg have been studying the mucus involved in defending the intestines and airways against infection for more than 30 years. To date, their work has focused very much on the large intestine, but this study, published in Science Signaling, now shows for the first time how this mucus normally protects the crypts (invaginations) of the small intestine.

The study was conducted in tissue samples from mice and in cultured cells. It included mapping several molecular mechanisms and cellular processes that serve as important means of defending the crypts of the small intestine.

In the mucosa of the small intestine there are small invaginations—crypts—where “goblet cells” and other specialized intestinal cells work together to flush out bacteria, thereby preventing bacteria from becoming established and invading cells.

“Our study shows that bacteria are cleared out of these crypts by cells of two types working together. Together, they cause a mucus plug to form from the mucus that’s secreted from the goblet cells and the fluid provided by adjacent cells. When the plug is pushed out, bacteria are washed out of the crypts.”

The speaker is Brendan Dolan, postdoctoral fellow from Dublin, Ireland at Sahlgrenska Academy at the University of Gothenburg. Using advanced microscopy, Dolan was also able to film, at cellular level, the secretion of mucus in the mucosa of the small intestine.

The study also reveals a previously unknown mechanism whereby “packaged” mucus that has formed inside cells expands inside the cell before it is released. This mucus is stored in small vesicles inside the goblet cells and, when the vesicles rupture inside the cells and fill them with the mucus, the cells vigorously and rapidly empty out their contents.

The finding is relevant to Crohn’s disease, a chronic gastrointestinal disorder, since the inflammation associated with it affects the small intestine in particular. Up to 30,000 Swedes live with Crohn’s disease.