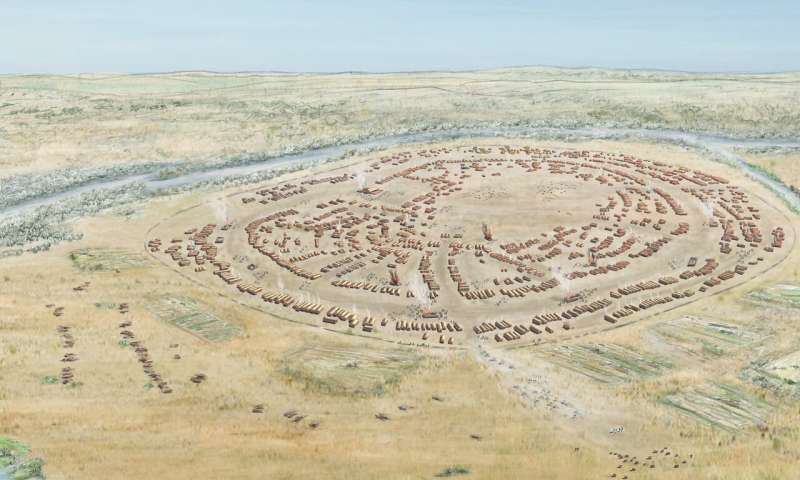 Whether it’s the plague, cholera or COVID-19, epidemics are part of human history. Long before there were vaccinations or microscopes for the investigation of pathogens, societies had to develop coping strategies. These are described in the brochure “Distant Times so Close: Pandemics and Crises reloaded,” which is the first in a series of historical-archeological publications on current topics published by the Cluster of Excellence ROOTS—Social, Environmental, and Cultural Connectivity in Past Societies at Kiel University (CAU).

“In a situation like the present, it is worthwhile to look in the past and remind ourselves of the strategies used by earlier cultures in order to deal with epidemics and/or pandemics,” said the cluster spokesperson, archeologist Professor Johannes Müller, regarding the motivation behind the publication.

Co-publisher Professor Cheryl Makarewicz said, “Because if modern technologies have reached their limits, for example, if there are still no vaccines or appropriate treatments available, then we are essentially in the same position as the people centuries ago.”

The interdisciplinary brochure, which appears in German and English, contains snapshots ranging from the Neolithic Age, through classical antiquity and to the Middle Ages. The authors are relevant experts from a wide spectrum of subjects represented in the cluster, which equally involves scientists from the natural sciences, life sciences and humanities. In short, easily comprehensible, richly illustrated articles describe significant cases of epidemics, their origins, their developments, surprisingly diverse strategies to cope with them, and last but not least, the culturally enshrined knowledge drawn from contemporary reflections.

The contributions aim to provide unexpected insights into what is partly considered well-known. “For example, it is hardly remembered that in his epic poem ‘The Iliad,’ the Greek poet Homer constructed his narrative of the Trojan War around the outbreak of an epidemic,” reported Professor Lutz Käppel. “The root of the tragedy in the Iliad, all of the pointless killing and dying, ultimately lies in the failure to tackle the epidemic on a socially equitable basis, and not in the medical situation itself.” The real danger for a community, according to this work, lies in the internal social distortion of interests, rather than the actual epidemic. In his new interpretation of the work, Käppel shows how this approach applies to the present situation.

In her contribution, “Roots of Zoonoses,” Cheryl Makarewicz sheds light on the origins of epidemics. She writes, “The roots of some diseases seem to have their origins in domestication processes in the Middle East 10,000 years ago.”

This means that since the Neolithic Age, i.e., the time in which humans began to domesticate animals, humanity had itself created a source of epidemics. Ben Krause-Kyora and Almut Nebel, who investigate so-called “ancient DNA,” support this finding: “In our own research work, we have shown that certain infectious diseases have already afflicted our ancestors since the Neolithic Age.” Which crisis management strategies were associated with them is revealed in further articles drawn from archeology, medical history and philosophy.

“The underlying idea within the cluster is that it’s always connectivities which significantly shape the development of human societies: connections and interactions between humans and the environment, groups and other groups, and in the broader sense, also between various domains of action, such as ways of life, social orders, knowledge cultures, economic strategies, diets or disease patterns. This could also serve as the starting point here,” said Lutz Käppel.