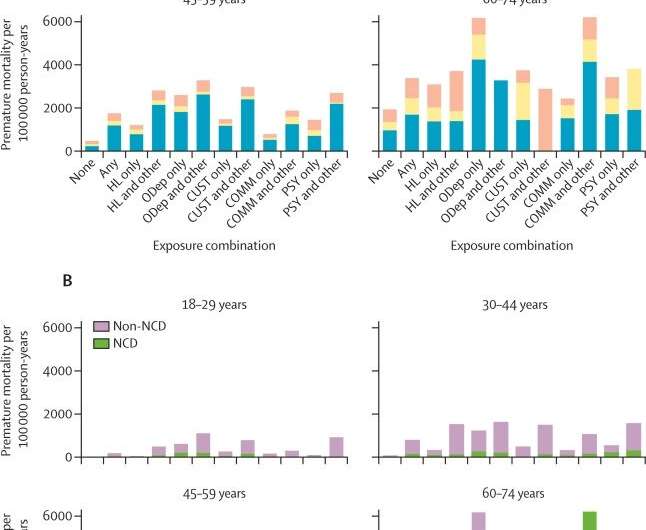 A new study, looking at more than half a million adults in Scotland, has highlighted very high rates of premature mortality from avoidable causes of death amongst society’s most disadvantaged.

Using population data from Glasgow, researchers were able to show that homelessness, opioid addiction, involvement in the criminal justice system and psychosis were all independently, and jointly linked to early and avoidable deaths. The research, led by the MRC/CSO Social and Public Health Sciences Unit at the University of Glasgow, is published in The Lancet Public Health.

People affected by homelessness, justice involvement, opioid dependence, and psychosis commonly experience exclusion from general society through stigma and discrimination. They also commonly face restrictions on basic freedoms or rights such as privacy, along with barriers to accessing public services, including health care.

Forms of extreme disadvantage—homelessness, justice involvement, opioid dependence, and psychosis—commonly co-occur. In many countries, the population of people affected by these experiences is growing, and also growing older, which is likely to increase susceptibility to common long-term health conditions.

Experiencing any one of these forms of extreme disadvantage in isolation is known to be associated with higher rates of ill health and premature death, compared with those in general society, even after accounting for other factors. Now, this new research suggests that those who experience more than one of these disadvantages, are most at risk of premature and avoidable death.

Most of the avoidable deaths included within the study’s data were caused by preventable conditions. Overall, the researchers found that deaths from avoidable causes among people who faced multiple forms of extreme disadvantage was higher than among those who had only experienced one. Deaths from avoidable causes were also in turn higher among those with one form of extreme disadvantage when compared with people who had not experienced any. For example, people experiencing homelessness plus at least one other form of disadvantage were on average 10 times more likely to die from an avoidable cause than people without any such experiences, compared to around 2.5 times for people with homelessness alone.

Another striking finding was high death rates from common long-term conditions such as heart disease, cancer, diabetes, and chronic lung disease (like asthma and COPD). The burden of these conditions among people with multiple forms of disadvantage has not previously been the focus of much research, yet their overall rate of death from these conditions was higher than among the unaffected population.

Dr. Emily Tweed, lead author of the study from the MRC/CSO Social and Public Health Sciences Unit at the University of Glasgow, said: “People affected by multiple forms of extreme disadvantage are dying early at appalling rates, often from conditions which are preventable or treatable. The challenges of struggling to keep a roof over your head, to restart your life after prison, and facing drug or mental health problems all take their toll on health.

“But there’s a huge amount we can do to support those affected—and prevent these experiences in the first place—by more joined-up working across different services and by tackling underlying causes such as poverty, unaffordable housing, and discrimination.”

David, who was a member of the advisory group for the project, describes himself as “having spent eight years in local authority care and 15 years revolving around a system of homelessness, prison, probation and A&E departments.”

He said: “As a person of lived experience who has journeyed along many of the paths in the study field, I found the whole piece of work very thought provoking. My experience of living and working on that front line for 35 years is that people who endure this life cycle for many years and seem incapable of change are usually rooted in traumatic experiences in their life. As a society we seem fixated on treating the symptoms of trauma as opposed to treating the trauma itself. We are currently leading Europe on homeless deaths, drug deaths and rates of imprisonment to name but a few. We really need to get underneath the drivers for all these areas as well as the premature deaths.”

The study used linked data from 2010 to 2019 for the adult population of Glasgow under the age of 75 years-old, around 530,000 people, accounting for around 11% of the population of Scotland at the time.

Matt Downie, chief executive of Crisis, said: “Homelessness is a public health emergency, and far too many lives are being lost each year because people do not have a safe, secure place to call home.

“People experiencing homelessness face some of the most severe inequalities in their physical and mental health compared to the rest of society, but this research demonstrates how much worse the situation is for those who face other disadvantages, such as substance dependency or involvement in the criminal justice system.

“Every single life lost to these experiences is a tragedy, and it’s a disgrace that people are dying from conditions and circumstances which could have been prevented. These deaths are not inevitable. By working together to support people experiencing these extreme forms of disadvantage, while doing everything we can to prevent these disadvantages in the first place, we can build a society where everyone has a place to call home, and everyone can live life to the fullest.”