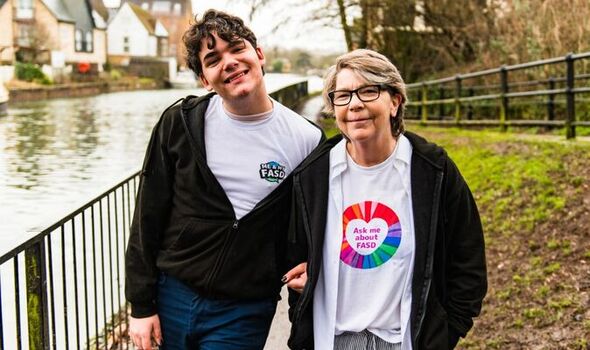 FASD is a neurodevelopmental condition that arises from alcohol exposure in the womb, with 428 associated conditions linked to “devastating consequences” – from brain damage to physical and developmental issues.

Today, The National Institute for Health and Care Excellence (NICE) said that any child thought to have been exposed should be given an assessment.

It also said women should be given early advice not to drink in their pregnancy, and have their alcohol consumption noted on records.

This is part of a 20-year fight by campaigners and families living with FASD, who feel they have been largely “unsupported”.

The spokeswoman for National Organisation for FASD, Joanna Buckard, said: “The NICE Quality Standard is a major leap forward in the fight to reduce alcohol-exposed pregnancies by giving women the information and support they need and, vitally, to create brighter futures for those with FASD and their families.

“Too many people with FASD up to now have been left undiagnosed and unsupported, with sometimes devastating and avoidable consequences.”

Professor Raja Mukherjee, who heads the FASD National Specialist Clinic and was on the NICE Quality Standard Committee, said: “FASD is a complex condition which affects brain and body.

“There are over 428 conditions linked to FASD, and it presents in multiple ways.

“I hope it does not take so long going forward to implement the improvements outlined in the NICE Quality Standard, and make the real difference that people with FASD deserve.”

Despite 2.4 million people thought to have FASD in the UK, compared to the 1 million people estimated to be living with autism, the majority of Brits (66 percent) have heard of autism.

A third (32 percent) who knew about FASD didn’t know how many people were living with it, while almost half (46 percent) estimated the figures to be lower than it is.

It comes as research, carried out by OnePoll, on behalf of the National Organisation for FASD, found nearly a quarter of adults think it’s okay to have alcohol during pregnancy – which goes against the Chief Medical Officer’s advice that it is safest to avoid it.

Jan Griffin, from Surrey, whose 20-year-old son Rossi has FASD, opened up about her experience.

She said: “I didn’t have any issues with alcohol. I was just an ordinary 40-year-old woman living my best life as it were.

“Had anybody said to me, when I was thinking of having a sleeping tablet or a tot of brandy to de-stress, “did you know alcohol kills cells as they migrate in the baby?”, I’d have sat up and made different decisions.

“I wish someone had said – this is what happens, these are the facts, the choice is yours, you’re not being judged.

“We cannot change the history of FASD, but with this long-awaited NICE Quality Standard we WILL change futures.”

Rossi said: “I’m very forgetful, oftentimes I have trouble socialising and sometimes it’s a comfort issue – I may get back or leg pains.”

Clare Devanney-Glynn, adoptive mum to three with FASD, who also sat on the NICE Quality Standard Committee, said: “Thanks to this, my children and others just like them will be able to enter adulthood being understood by society in a way that just hasn’t ever happened before.

“This has the capacity to change what our entire society looks like for the better.”