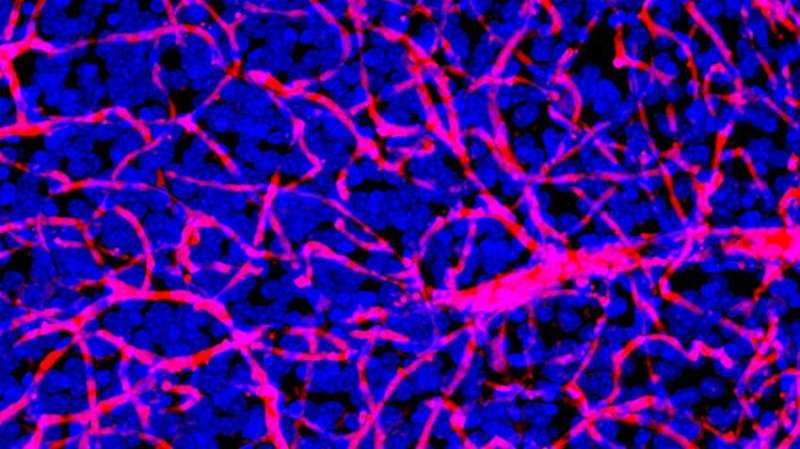 A mutated gene affects growth of brain tumor cells in young adults, indicating sensitivity to a new treatment strategy, a team of researchers at the University of Michigan Rogel Cancer Center discovered. These findings, recently published in Cell Reports, present possibilities for more effective therapies for glioma patients with this gene mutation.

The protein coding gene ATRX is mutated in just over half of high-grade glioma young adult patients, most commonly in teenagers and adults up to 40-years-old. Though some studies have given hints as to why ATRX is mutated in gliomas, many questions remain, and researchers have not been able to use medicines to target the mutation. “We’re still learning why it so often affects this population and how it affects response to targeted therapies,” said Carl Koschmann, M.D., pediatric neuro-oncologist at U-M Rogel Cancer Center and U-M C.S. Mott Children’s Hospital, researcher with the Chad Carr Pediatric Brain Tumor Center, and lead investigator on the study.

This research gave Koschmann and his team more insight into how ATRX-mutant operates in glioma cells, and its interactions with a class of drugs called ATM inhibitors. They found that glioma cells with mutated ATRX have less amount and activity of a protein called Checkpoint Kinase 1 (Chk1), which regulates the division of glioma cells. “It’s basically a puppeteer protein,” he said. “When you don’t have enough Chk1, you have a dysregulated cell cycle.”

Radiation generally stops cells from cycling and dividing, and healthy cells and glioma cells will use this time to heal their damaged DNA to maintain the strength of the cell. But those checks aren’t in place with ATRX-mutated cells. After radiation, the mutated cells keep cycling and have limited ability to repair their DNA. This makes the cells more responsive to radiation, but instead of being eliminated completely, Koschmann and his team discovered that another checkpoint gene—Checkpoint Kinase 2 (Chk2)—”fills in” when Chk1 is silenced, enabling the mutated cells to survive the radiation to some degree.

With this knowledge, the team investigated how radiation sensitizers, medicines taken alongside radiation, would interact with ATRX-mutant cells and target this unique biology.

In a previous study, Koschmann and colleagues in the Castro-Lowenstein lab found radiation to be an effective treatment for glioma patients with a mutated ATRX gene. They hypothesized that incorporating ATM inhibitors, a class of radiation sensitizer, which prevented Chk2 from compensating for an inactive Chk1, would increase the efficacy of radiation therapy in mice lab samples.

“We were overwhelmed by the data,” said Koschmann. “When we added ATM-inhibitors to a standard course of radiation for mice with gliomas with mutated ATRX, we witnessed much longer survival rates—triple the survival rate than using only radiation therapy. We didn’t see this in the glioma with non-mutated (wildtype) glioma. The ATM inhibitors basically turn off the only remaining checkpoint. The ATRX-mutated cells can’t handle the damage.”

Koschmann explains that the difficulty in treating brain tumors, unlike other types of cancer elsewhere in the body, lies in the blood-brain barrier, which only about 5% of drugs can cross. For Koschmann and his team, much of their investigation into ATM-inhibitors centered around figuring out its ability to traverse that barrier. “We were surprised to see how well this kind of drug went to the brain and did what we needed it to do in the tumor cells,” he says.

While the study was conducted in the lab using mice, the team is hopeful these findings will be relevant outside the lab, too.

“For glioma patients with this mutation, this class of drugs wouldn’t have been considered otherwise. With this data, we’re making a case that the next round of clinical trials should use this kind of therapy for anyone with this mutation.”

The team is now communicating with the manufacturer of the ATM inhibitors used in this research, to see how to best incorporate these findings into a clinical trial. One is currently underway using a drug tested in this study, AZD1390, but may exclude the patient population most likely to have the ATRX mutation.

“Our hope is that the trial sponsor will either start a new trial or add an arm to their current trial that captures this population, because we think that’s who will have the best response to this drug,” Koschmann explained.

Koschmann says the success of this study lies in the collaboration between him and his fellow researchers.