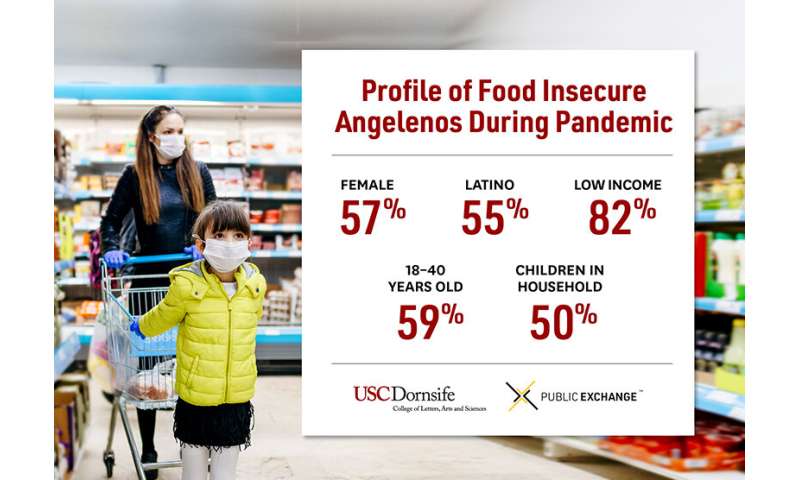 More than one in four Los Angeles County households experienced at least one instance of food insecurity—a lack of access to affordable and nutritious food—from April through July, according to a new study directed by Public Exchange, based at the USC Dornsife College of Letters, Arts and Sciences. The study also found that the pandemic has overwhelmingly impacted women, people with low incomes and the unemployed, and Latinos. Higher income groups that don’t typically struggle to afford food were also affected.

Though levels of food insecurity in the county peaked in April, during the early days of the pandemic, it remains significantly higher than pre-pandemic levels.

“For the first time, we’re getting a comprehensive look at how the pandemic has impacted the ability of Los Angeles County residents to afford food,” said Kayla de la Haye, the lead researcher and assistant professor of preventive medicine at Keck School of Medicine of USC. “The spread of COVID-19 has worsened the already high levels of food insecurity among low-income households and marginalized groups and has even impacted demographic groups that are historically less likely to ever experience it.”

The study is one of the first to measure food insecurity in a major U.S. city since the start of the pandemic.

Food insecurity is a disruption in the ability to get food or to regularly eat because of limited money or other resources. Studies show that children who experience food insecurity have poorer nutrition, worse general health and oral health, and a higher risk for cognitive problems, anxiety and depression. Adults have a higher risk for obesity, diabetes and hypertension, and greater mental health and sleep problems.

“What’s particularly concerning are the 8% of residents—more than a quarter million Angelenos—who have remained food insecure throughout the pandemic,” said de la Haye. “Not only because they’re likely to be unemployed and low-income, but because they reported having fewer financial benefits and facing greater barriers to getting food, such as not having a car or a grocery store nearby.”

People who experienced food insecurity—particularly those who were regularly food insecure—were much more likely to experience a decline in the healthiness of their diet.

“The consequence of eating very little, other than low-cost unhealthy food, means people experiencing food insecurity are at greater risk for food-related diseases like obesity, diabetes and heart disease,” said de la Haye. This could worsen the already high rates of these diseases among the most vulnerable communities in the county.

The study was conducted in collaboration with the Los Angeles County Emergency Food Security Branch. A report of the findings has been shared with L.A. County officials.