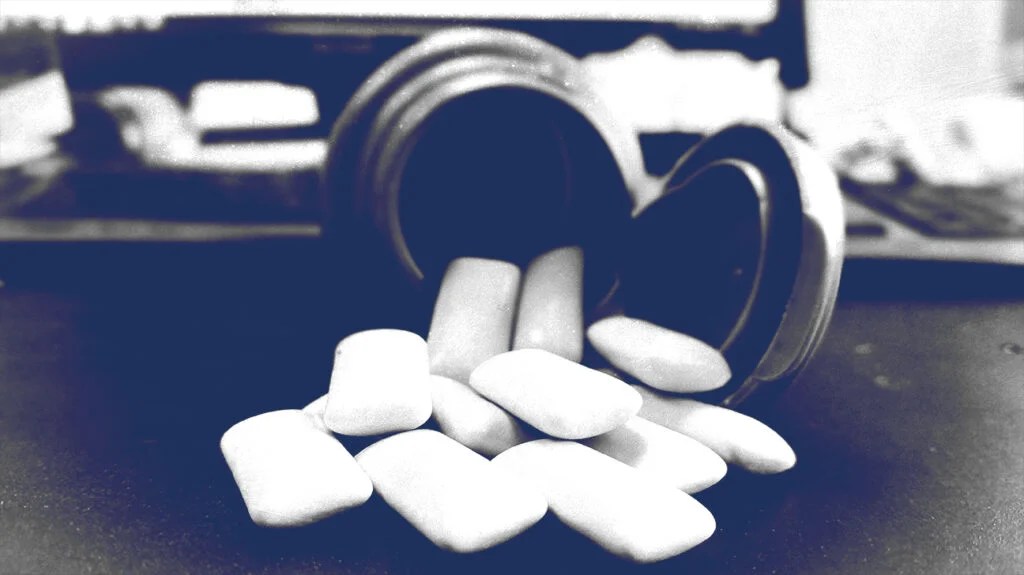 SARS-CoV-2 transmits through droplets and aerosols produced when a person with the virus talks, breathes, or sings. This is called aerosol transmission.

The saliva of both symptomatic and asymptomatic people with SARS-CoV-2 contains a high SARS-CoV-2 viral load. This salivary viral burden correlates with COVID-19 symptom severity — a higher viral load has associations with more severe symptoms.

The virus primarily replicates inside salivary glands and oral mucous membranes, making them a potentially high-risk route for SARS-CoV-2 transmission.

This is especially true for newer variants — the viral load of individuals with the Delta variant is 1,260 times higher than those with previous strains.

However, viral inactivation in the mouth could be a useful strategy to reduce the spread of the virus.

In a recent study, researchers led by Penn Dental Medicine in Philadelphia, PA, created a chewing gum from plant-based materials that may reduce the SARS-CoV-2 viral load in saliva.

“SARS-CoV-2 replicates in the salivary glands, therefore, debulking viruses in the oral cavity should decrease reinfection of [people with a SARS-CoV-2 infection], in addition to prevention of transmission.”

“Proteins bioencapsulated in the chewing gum are stable and fully functional for several years when stored at ambient temperature, thereby making them affordable by elimination of complex manufacturing processes, expensive cold storage, transportation, and other costs associated with current vaccines,” he added.

“It is an interesting paper from the perspective of how biomaterials could have potential in oral drug delivery as well as being used as molecular ‘traps’ for pathogens,” Semih Tareen, Ph.D., senior director and head of viral vector research at Sana Biotechnology, who was not involved in the study, told MNT.

“The authors speculate that such approaches could help with other potential salivary-replicating viruses, such as Epstein-Barr virus, herpes simplex, [human betaherpesvirus 7], cytomegalovirus, hepatitis C, and Zika. It will be an interesting field to follow to see if indeed such biomaterials would end up with real-world use scenarios,” Dr. Tareen explained.

ACE2 is a protein that sits on the surface of many cell types. It serves as a doorway for small proteins to enter cells and regulate their function. It is particularly involved in processes linked to blood pressure, wound healing, and inflammation.

ACE2 is also the receptor that SARS-CoV-2 uses to enter human cells.

Studies show that people with respiratory distress from COVID-19 have low ACE2 activity. There is also some evidence that injecting soluble ACE2 can restore health in people with the disease.

Before the pandemic, Dr. Daniell had been studying the ACE2 protein as a way to treat hypertension. His lab developed a method to grow this protein using a patented plant-based production system.

The plant-based system works by bombarding plant material with ACE2 DNA to induce its growth in plant chloroplasts. After being freeze-dried and ground-up, it is ready for delivery to patients, circumventing the expensive drug synthesis process.

Alongside this research, Dr. Daniell and his colleagues investigated a chewing gum infused with plant-grown proteins that disrupt dental plaque.

Dr. Daniell decided to combine his knowledge of both ACE2 and chewing gum to create a gum capable of neutralizing SARS-CoV-2 in the oral cavity.

Dr. Daniell reached out to Ronald Collman, M.D., at Penn Medicine, a virologist and pulmonary and critical care doctor whose team had been collecting saliva and other biospecimens from people with COVID-19 throughout the pandemic.

They began a collaboration to explore whether ACE2-infused chewing gum could neutralize SARS-CoV-2 in the saliva samples.

The researchers first grew ACE2 in lettuce plants, alongside a compound that enables ACE2 to cross mucosal barriers and facilitate binding. They then incorporated these proteins into cinnamon-flavored chewing gum and incubated these with nasopharyngeal swabs taken from people who had tested positive for SARS-CoV-2.

The researchers found that the ACE2 in the chewing gum could neutralize SARS-CoV-2 in the nasopharyngeal swabs.

Next, the researchers modified pseudoviruses to express the SARS-CoV-2 spike protein and then incubated them with the ACE2-infused gum.

In this experiment, the gum prevented the viruses from entering cells by blocking the ACE2 receptor or binding directly to the spike protein.

According to the authors, previous studies found that 48 sugar alcohol compounds, including sorbitol, galactitol, and mannitol, bind to viral proteins, especially the VP40 protein within Ebola. The presence of these sugars in the placebo gum may have explained some of its antiviral effects.

When asked to explain the underlying mechanisms behind ACE2-infused gum on SARS-CoV-2, Dr. Daniell said:

“ACE2 utilizes two different mechanisms: The ACE2 enzyme directly binds to the spike protein on SARS-CoV-2 and traps virus in the chewing gum. In addition, ACE2 binds to its own receptor on oral epithelial cells, thereby blocking entry of any virus that is not trapped in the chewing gum.”

Dr. Tareen expanded on this: “The concept revolves around a molecular ‘trap’ where SARS-CoV-2 would be ‘trapped’ by two molecules present on the special drug delivered in the gum. The two molecules are CTB (Cholera nontoxin B) and ACE2.”

“ACE2 is a well-known receptor for SARS-CoV-2, while CTB is known to bind GM1, a cellular glycolipid [a lipid that maintains the stability of cell membranes and facilitates intercellular interactions] that some studies have demonstrated to be a co-receptor for SARS-CoV-2. The concept of using molecular ‘traps’ like this for SARS-CoV-2 has made headlines earlier with proposed nasal sprays.”

The authors conclude that ACE2-infused chewing gum could help protect people with a SARS-CoV-2 infection and also reduce the risk of transmission to others.

When asked about limitations to the research, Dr. Tareen noted that the study included only three patient samples.

He added: “It is [also] unclear to me why nasopharyngeal swabs were used for a saliva-based model and how a chewing gum in the mouth would affect viral load at a close but still other site. The ddPCR [Droplet Digital polymerase chain reaction] assay used 15 patient saliva samples that were mixed with gum, but did not actually test gum-chewing in people with COVID-19.”

He further noted that findings based on viruses modified to resemble SARS-CoV-2 may not translate over to the virus.

Dr. Daniell and his team are pushing for the gum to enter clinical trials to evaluate its safety and efficacy in people with SARS-CoV-2 to address these issues.

“We have completed additional toxicology studies required by [the Food and Drug Administration (FDA)], and a revised Investigational New Drug Application (IND) is [preparing to request] emergency use authorization,” said Dr. Daniell, “Because of successful toxicology studies and this is topical delivery and not an internal drug, rapid approval is anticipated.”

“These studies now must be tried in people in order to determine whether the ACE2 gum will be accepted.”

“For example, how does it taste and does the addition of ACE2 impair the gum’s ‘chewability’”? How long will the protection against infection last? Will persons who wish to be protected have to be actively chewing gum for long periods of time?” he added.

“Of course, the critical question is whether ACE2 gum can actually avert infection. This requires testing in people because they breathe through their noses, and it remains to be seen whether any protection extends beyond the oral cavity into the upper back of the throat, the nasopharynx,” he concluded.