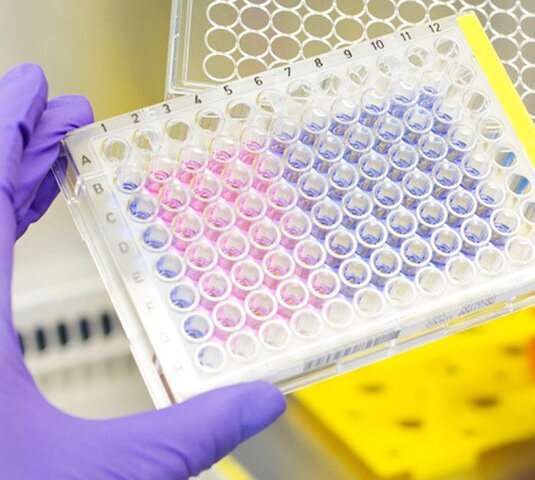 Scientists at LMU have shown that a signaling pathway that is disrupted in Ewing sarcoma specifically sensitizes tumor cells to a particular drug. The finding may open a route to new therapies for the most aggressive forms of the disease.

Ewing sarcoma is the second most frequent type of bone cancer found in children and adolescents. A spontaneous mutation, which results in the formation of an oncogenic gene fusion, is a prerequisite for the onset of this disease. The protein encoded by the fusion oncogene activates other genes, and triggers a process that can progress to the malignant stage. The relative severity of the disease may be influenced by the nature of genetic variants present at other gene loci in individual carriers of the fusion oncogene. LMU researchers led by Thomas Grünewald, Leader of the Max-Eder Research Group for Pediatric Sarcoma Biology in the Institute of Pathology at LMU and a Division Head at the German Center for Cancer Research (DKFZ) in Heidelberg, have now identified one of the genes that is aberrantly activated by the fusion oncogene—and shown that it makes the tumor selectively susceptible to pharmacological attack. The project was mainly funded by the German Cancer Aid (Deutsche Krebshilfe), and the findings appear in the online journal Nature Communications.

The therapeutic strategies available for the treatment of Ewing sarcoma are limited, as demonstrated by the fact that in approximately one-third of patients, tumor remission is eventually followed by—often fatal—relapse. This underlines the need for alternative approaches to treatment of the malignancy. “For various reasons, the protein encoded by the fusion oncogene itself is not a suitable drug target,” says Grünewald. “So we began a search for surrogate targets among the genes that are activated by the fusion oncogene, focusing on those that are known to play a role in controlling the normal course of bone development. This search revealed that the gene SOX6 is markedly overexpressed in Ewing sarcoma.” During the normal growth of bone, SOX6 is activated for a short time only, and triggers a massive but brief burst of cell proliferation. “When we silenced the activity of SOX6 in cell lines derived from patients with Ewing sarcoma, the rate of cell and tumor growth in our model systems was significantly reduced. We assume that SOX6 is continuously activated by the fusion oncogene, and that this in part accounts for the unchecked growth of these tumors,” says Grünewald.

The fact that the SOX6 signaling pathway is deregulated in Ewing sarcoma cells should in principle make them specifically vulnerable to elimination, because the SOX6 protein also induces a cellular stress response.

Consequently, cells that overexpress the protein should produce higher levels of ‘reactive oxygen species’ (ROS) than other cells. This feature should in turn make the tumor cells especially sensitive to Elesclomol. Originally developed as a treatment for malignant melanomas, this compound also induces the generation of ROS. “Since cells that overexpress SOX6 already contain large amounts of ROS, exposure to Elesclomol should boost their concentrations beyond the levels required to induce cell death,” Grünewald explains. “Moreover, this effect may be relatively selective for the tumor cells, since cells with normal levels of SOX6 are less likely to reach the critical concentration of ROS even in the presence of Elesclomol.” Indeed, laboratory studies on conventional cell cultures and 3-D bone models confirmed that Elesclomol significantly reduces the viability of Ewing sarcoma cells with higher SOX6 activity relative to those that synthesize smaller amounts of the SOX6 protein. Experiments in mouse models also showed that Elesclomol reduces rates of tumor growth.