Advocates believe it can soothe toothaches and burns, and even ward off a runny nose and sore throat.

But manuka honey may have another health power — the ability to fight superbugs.

Researchers found the trendy spread, which can sell for up to £1,300 per pot, could kill one particularly drug-resistant infection.

Experts behind the tests, done in petri dishes, claimed manuka honey holds ‘great promise’ in fighting Mycobacterium abscessus, the nasty bug it was tested on.

Made by bees that feast on manuka trees located only in New Zealand and Australia, the product often warrants sky-high price tags.

A-listers Gwyneth Paltrow, Scarlett Johansson and Katherine Jenkins have all extolled the virtues of this ‘liquid gold’ in the past few years.

Mycobacterium abscessus is dangerous to people with weakened immune systems or those with existing lung conditions like cystic fibrosis.

It comes from the same family as tuberculosis and requires a cocktail of antibiotics — known as antimicrobial chemotherapy — to treat.

Patients can experience severe side effects from the drugs, including hearing loss, vomiting, diarrhea, hives and fatigue.

But Aston University in Birmingham experts found using the honey in combination with lower doses of one type of antibiotic could help treat the infections.

This could pave the way for new drugs combining the two substances that would improve the quality of life of patients in the future, they said. 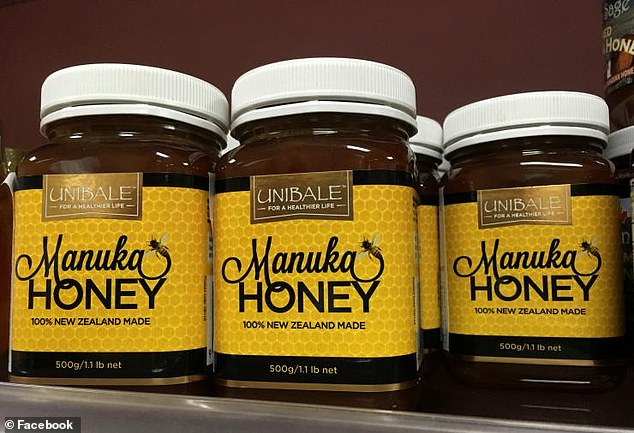 Mycobacterium abscessus is a drug-resistant bacteria that can cause deadly lung infections in people with lung conditions and weakened immune systems.

The bacteria comes from the same family as tuberculosis but differs in that it is only a danger to people with conditions like cystic fibrosis or bronchiectasis.

Infections are virtually impossible to eradicate in people with cystic fibrosis.

It can also be deadly if the patient requires a lung transplant because they are not eligible for surgery if the infection is present.

The bacteria can also cause skin and soft tissue infections.

Patients usually require a cocktail of antibiotics to treat the infection.

This can involve 12 months or more of antimicrobial chemotherapy, that does not always result in a cure.

High doses of potent antibiotics like amikacin are used, which can cause severe side effects like hearing loss, vomiting, diarrhea, hives and fatigue.

Around 10,800 people suffer with cystic fibrosis in the UK, making them vulnerable to infection with the bacteria. Some 40,000 are affected in the US.

Lead author and PhD researcher Victoria Nolan, of Birmingham’s Aston University, said: ‘So far treatment of Mycobacterium abscessus pulmonary infections can be problematic due to its drug resistant nature.

‘The variety of antibiotics required to combat infection result in severe side effects.

‘However, the use of this potential treatment combining amikacin and manuka honey shows great promise as an improved therapy for these terrible pulmonary infections.

‘There is a need for better treatment outcomes and in the future we hope that this potential treatment can be tested further.’

The study, published in Microbiology, used samples of the bacteria taken from 16 cystic fibrosis patients infected with it.

They allowed the bacteria to grow in petri dishes and tested how well the growth was stopped by a combination of manuka honey and amikacin.

Researchers mixed the honey with amikacin at different doses.

The dishes were suspended from a metal bar inside a sealed bag, with the drug and honey combo sprayed into the bag using a nebuliser — a machine that turns liquid medicine into a fine mist.

They were sprayed for around 20 minutes before being taken out and left to incubate for three hours at body temperature, to mimic how the bacteria would grow in the body.

Results showed amikacin dosages of just 2 micrograms per millilitre were needed to kill the bacteria when it was mixed with the honey.

Normally, eight times that dose is needed to treat patients when the strong antibiotic is used on its own.

Author Dr Jonathan Cox, a microbiologist, said: ‘By combining a totally natural ingredient such as manuka honey with amikacin we have found a way to potentially kill off these bacteria with eight times less drug than before.

‘This has the potential to significantly reduce amikacin-associated hearing loss and greatly improve the quality of life of so many patients — particularly those with cystic fibrosis.

‘I am delighted with the outcome of this research because it paves the way for future experiments.

‘We hope that with funding we can move towards clinical trials that could result in a change in strategy for the treatment of this debilitating infection.’

Manuka honey has been used to treat wounds for centuries and experts discovered its natural antibacterial qualities in the 1800s.

The honey has more antibiotic qualities than regular spreads because of the high levels of a chemical called dihydroxyacetone (DHA) found in the nectar in the tree’s flowers.

When this the nectar is processed into honey, the DHA is turned into methylglyoxal (MGO) — which is antibacterial.

The chemical has been found to work against other drug resistant gram-negative bacteria, including MRSA.

Millions of people worldwide are infected by gram-negative bacteria — including E. coli — every year. They are behind 75 per cent of global drug-resistant deaths.