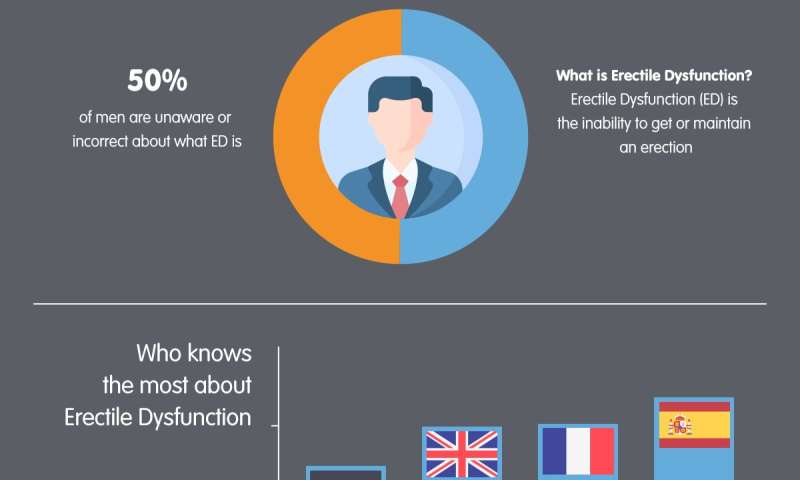 Awareness of erectile dysfunction (ED) is alarmingly low in men and women aged 20 to 70, a new survey commissioned by the European Association of Urology (EAU) has revealed. The majority of the respondents do not know what ED exactly entails, and one in four has never heard of any of the seven most common treatments for ED.

The survey examined the knowledge of and experience with ED of 3,032 men and women of different age groups between 20 and 70 years old in Spain, France, Germany and the UK. ED is defined as the inability to get or keep an erection. When asked what ED is, the majority of respondents either gave incorrect answers (34%) or stated they do not know what ED is (17%). Those who are single are the least likely to know the definition of ED. German respondents scored worst on this question; only 49% answered correctly, compared to Spain where a solid majority (78%) did.

“As ED is actually a common male medical condition, it is surprising that a majority does not know what ED is,” comments Prof. Christopher Chapple, Secretary General of the EAU.

Indeed, the EAU Guidelines 2020 on Sexual and Reproductive Health state that “epidemiological data have shown a high prevalence and incidence of ED worldwide.” The guidelines cite a study that reports an overall ED prevalence of 52% in men aged 40-70 years. In the EAU survey, when asked what percentage of men in their country aged 50-80 suffer from ED, respondents most often selected 21-30%.

“The risk of having ED increases with age, but it affects men of all ages and ethnicities,” Prof. Chapple continues. “As a result, there should not be any taboo about it. Although I am happy to see that the majority of the respondents who have experience with ED say to talk about it, there is still room for improvement.”

Of the 17% of the respondents who have or have a partner who has ever experienced ED, approximately one in four (26%) admitted to not talking about it with anyone. Notably, of those in a relationship (those who live with a partner, are married, have a civil partnership, or are just in a relationship), an average of only 29% talk to each other about ED. German respondents most often cited “feeling uncomfortable to talk about ED” as their reason for not seeking professional help.

Communication is the key

“Clearly, ED is a common medical condition. There’s absolutely no need for shame,” Prof. Chapple says. “Talk about it with each other. This will provide relief and will take away some of the pressure. Communication is the key to breaking the taboo.”

A small majority of 53% sought medical advice from a healthcare professional (a GP, urologist, sexologist, sexual therapist or psychologist). Interestingly, those aged 20-30 years old are the least likely to see a GP, but the most likely to see a sexual therapist or psychologist. Respondents who didn’t seek medical advice were most likely to have no reason for it. “This could mean that they are not aware they can seek professional help,” Prof. Chapple says. “But ED is always treatable.”

He refers to another alarming finding: One in four of the respondents (26%) has never heard of any of the treatments for ED listed in the survey: medication, sexual education and relationship therapy, a vacuum erection device, penile injections, penile implants, shockwave therapy, or topical therapies. Knowledge about ED treatment is most limited in the UK; 31% have never heard of any of the treatments listed (compared to 18% in Spain) and only 50% think ED is treatable (whereas 68% in Spain believe so).

Prof. Chapple says, “I understand that ED might feel like a private matter to you. But this should not prevent you from improving your quality of life. Please talk about it and seek help.”

The new survey was commissioned by the European Association of Urology (EAU) for its annual Urology Week (21-25 September 2020). Over 3,000 members of the public from Spain, France, Germany and the UK were asked about their knowledge of and experience with erectile dysfunction (ED). The survey was supported by an educational grant of Boston Scientific.

Breakdown of 3,032 respondents per country: