The wonder vaccines that could beat the next Covid variants: DR MICHAEL MOSLEY gives an exciting new reason to be cheerful as we turn the corner on the pandemic

There have been a lot of false dawns in our long and deadly battle with Covid-19, but I am confident that we are, finally, coming out on top.

At least for the ‘we’ who live in the UK, there are several reasons to be cheerful: the rates of infection are starting to fall; restrictions are being eased; we have new anti-Covid drugs such as Paxlovid; which has been shown in recent trials to cut death rates by 89 per cent; and, thanks to the vaccines, hospital beds are no longer crammed with Covid patients.

This is a cause for both celebration and sighs of relief because this new variant could have been so much worse.

We are lucky that Omicron, although incredibly infectious, is far less deadly than previous variants — or at least it is if you are fully immunised, with a booster.

A new study by Imperial College London suggests the vaccine effectiveness against Omicron symptoms is between 55 and 80 per cent. And though it is still possible to get infected if you are fully vaccinated, it will be less severe. A man is pictured being vaccinated in Stockton on Tees

The picture is different if you haven’t been vaccinated. According to recent studies in the U.S. and Switzerland, if you’re unvaccinated and catch Covid, you’re at least 60 times more likely to get sick and die than if you’re triple jabbed.

The vaccinated are also far less likely to get symptoms of long Covid, such as loss of taste and smell, or prolonged periods of tiredness, research shows.

Another reason to be cheerful — if you’ve already had Covid, your chances of re-infection drop dramatically if you’ve had the booster.

A new study by Imperial College London suggests the vaccine effectiveness against Omicron symptoms is between 55 and 80 per cent. And though it is still possible to get infected if you are fully vaccinated, it will be less severe.

Quite a few of my friends who’ve had Omicron, despite being triple jabbed, say that this time round it really was no worse than a cold. Richard, a teacher, told me that last time he got Covid he was laid out for ten days with ‘taste and smell messed up, lethargy and terrible headaches’, but this time he’s had a runny nose, sneezing and a slightly sore throat. He is almost embarrassed to be stuck at home.

In the UK, we are fortunate that most people are happy to be vaccinated and our vaccine programme has been rolled out so efficiently. In the U.S., where rates of vaccination are much lower, and where so many people are overweight, with high blood pressure and high blood sugar levels, there has not only been a tsunami of infections caused by Omicron, but record levels of hospitalisations.

Death rates in the U.S. are currently averaging around 2,300 people a day and in 2020, before we had the vaccine, so many Americans died that there was a record drop in life expectancy, down by more than two years. 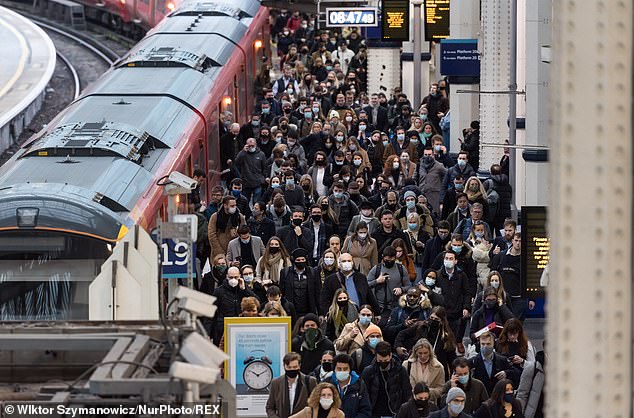 There have been a lot of false dawns in our long and deadly battle with Covid-19, but I am confident that we are, finally, coming out on top

In the UK, the drop in life expectancy was half that, one year (down to 78 years for men, and 82 years for women), but it still marks the biggest drop since World War II.

That’s why, despite all the good news, there is a cloud on the horizon — some people, such as those being treated for cancer or who have immunity problems, are still vulnerable to Covid.

And yet despite all the evidence that vaccines are safe and effective, there are still lots of people who have chosen not to have them, including tens of thousands of frontline NHS staff who have until next Wednesday to get their first jab or face losing their jobs. I strongly believe that frontline NHS staff should get vaccinated, to protect their patients if not themselves. A close friend of mine’s father recently died after getting Covid while in hospital being treated for heart failure — and though I can’t prove it, odds are high he got it from an unvaccinated patient or member of staff.

You would feel pretty angry if you, or someone you love, got an infectious disease, such as hepatitis, from an unvaccinated doctor.

But that used to happen in the days before frontline medical staff were obliged to have a hepatitis B jab. I can remember, back in the 1990s, a London surgeon being jailed for lying about his hepatitis status.

The judge told the surgeon that he had done ‘a terrible thing’ by putting his own interests before those of his patients.

B ut the few people who I know are anti-vaccine seem reluctant to change their minds, even when they get ill (which most of them have) and I fear that things could turn really ugly.

On a more cheerful note, although the emergence of new variants is not only possible, but highly likely, there are plenty of labs around the world busy working on so-called universal vaccines, designed to protect us against future threats.

Researchers from the University of Cambridge began safety trials last month of a vaccine booster that targets not only the spike protein, but other bits of the virus that are vitally important for its life cycle, which means it is unlikely to be able to evade our immune defences by changing that bit of its anatomy.

Trypanophobes (people who are afraid of needles) will also be delighted to hear that this particular vaccine is delivered by a blast of air, into the skin, and there is not a needle in sight.

All in all, I am feeling quietly confident about the future — but in the meantime, while Covid rates remain high, I will continue to wear a mask in crowded, public places and avoid handshakes.

I often get asked what is the best time of day to do exercise. The glib answer is: ‘Whenever you can fit it in.’

A less glib answer is: ‘It depends what you want to achieve.’ Are you mainly looking to burn through fat, or are you looking to improve your metabolic health (in other words, things such as your blood sugar levels)?

One study published in the International Journal of Obesity in 2019 found that a group of volunteers who mainly exercised in the morning (between 7am and 11.59am) lost more weight than those who did their workouts later in the day (between 3pm and 7pm), despite minimal differences in the amount of effort they put in.

The researchers suggested that one reason for the extra weight loss is because the people exercising in the mornings burnt more calories across the day than those exercising in the afternoon. But before you abandon your afternoon workout, there are advantages to getting active later on.

In another study, published in 2020, researchers from Maastricht University Medical Center in the Netherlands discovered that middle-aged men with raised blood sugar levels who exercised in the afternoon (3pm to 6pm) got the most benefit, in terms of their blood sugar control and insulin sensitivity, compared with those who exercised in the morning (8am to 10am).

So why do you get these different effects at different times of day? No one really knows, but it is almost certainly tied in with your body clock rhythms. Whatever the explanation, if you have the time, do try to do a bit of both.

Poison that could ease pain

Chronic pain affects between a third and a half of all British adults, and strong pain-killing medication such as opioids can have downsides.

But, even so, would you be happy to be injected with a drug derived from a bacterial toxin so deadly it’s been used as a bioweapon? Yet this could be on the cards, following recent studies showing that a toxin produced by bacteria that cause anthrax — a nasty disease — can target pain-sensing fibres, holding out hope for a new form of painkiller.

There is, of course, nothing new about developing drugs from poisonous bugs. Botulinum toxin (or Botox) is the most poisonous substance known to man, yet people pay a lot to have it injected.

Then there is captopril, used for high blood pressure, which is derived from snake venom; and exenatide, a drug used to treat type 2 diabetes, based on chemicals in the saliva of the Gila monster, a large lizard.

Researchers from Harvard Medical School have shown that injecting the anthrax-causing toxin into mice blocks pain signals — and because it specifically targets nerves that cause pain, they should result in fewer side-effects than common painkillers.