Doctors wrongly told me 10 times that my girl, 3, was fine… but she actually had leukaemia

A girl was diagnosed with leukaemia after bungling NHS medics wrongly told her parents she was fine.

Ilona Zahorszki begged 10 different medics to test her daughter Theano’s blood to rule out anything sinister after she came down with sudden a range of illnesses.

But each time she was told they were unnecessary and her daughter was having a ‘perfectly normal’ response to a plethora of maladies, ranging from bugs to allergic reactions, constipation, and even arthritis.

Medics finally caved on New Year’s Eve, after the 33-year-old threatened to take her daughter overseas for the test. 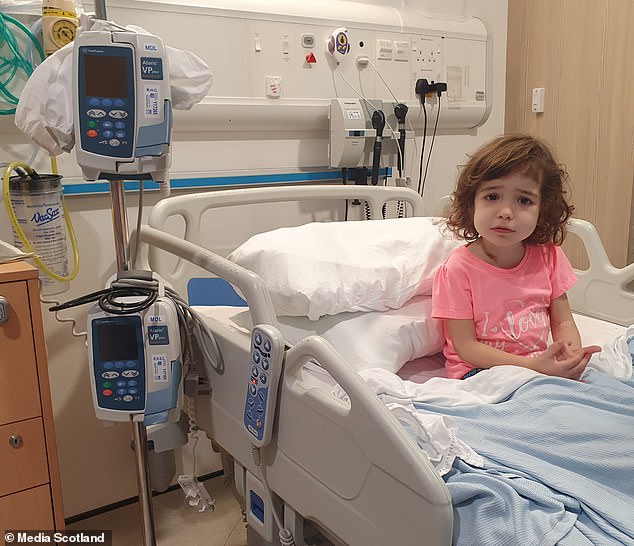 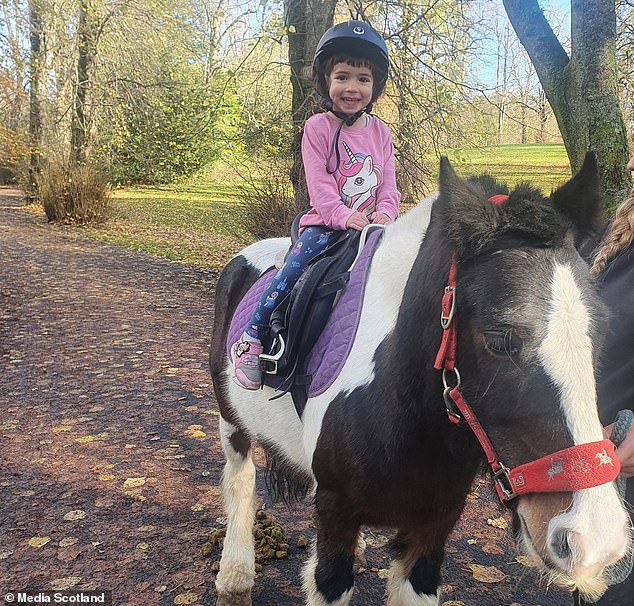 Leukaemia is a cancer that starts in blood-forming tissue, usually the bone marrow.

It leads to the over-production of abnormal white blood cells, which fight off infections.

But a higher number of white blood cells means there is ‘less room’ for other cells, including red blood cells – which transport oxygen around the body – and platelets – which cause blood to clot when the skin is cut.

There are many different types of leukaemia, which are defined according to the immune cells they affect and how the disease progresses.

For all types combined, 9,900 people in the UK were diagnosed with leukaemia in 2015, Cancer Research UK statistics reveal.

And in the US, around 60,300 people were told they had the disease last year, according to the National Cancer Institute.

Most cases have no obvious cause, with the cancer not being contagious or inherited.

Other risk factors include being male, exposed to certain chemicals or radiation, and some bone-marrow disorders.

Symptoms are generally vague and get worse over time.

Acute leukaemia – which progresses rapidly and aggressively – is often curable via chemo, radiotherapy or a stem cell transplant.

Chronic forms of the disease – which typically progress slowly – tend to incurable, however, these patients can often live with the disease.

And a day later, on January 1, they are claimed to have diagnosed Theano with leukaemia, a type of blood cancer.

Symptoms if leukaemia can include bone pain, fatigue and frequent infections.

Now Mrs Zahorszki, from North Lanarkshire in Scotland, is urging other parents to follow their instincts and not allow their concerns to be dismissed by medics.

Theano began showing signs of illness in August when she started nursery.

Her parents originally thought she was coming down with the usual range of bugs children get when they start mixing with others their age.

However, the rapid and frequent onset of Theano’s illnesses led Hungarian-born Mrs Zahorszki and her husband Antonio, from Greece, to seek medical advice.

Even though she had a new cold every two weeks up to October, GPs assured the couple this was normal for a youngster starting nursery.

But they soon began to suspect something more serious was to blame.

Over the course of the next few months, the couple took their daughter to their GP and A&E seeking help.

But they said that each time their concerns were dismissed as Theano having mild childhood ailments like chest, urinary and ear infections.

The couple said some medics even diagnosed their daughter’s illness as being caused by conditions like constipation, an allergic reaction to antibiotics, a leg injury, and even arthritis.

They claimed that each time they saw a medic they asked for blood tests to be done for Theano.

However, they said each time they were told the tests weren’t needed and Theano was having a ‘perfectly normal’ response to her illnesses.

Mrs Zahorszki, who works as a carer, said: ‘In November and December I knew Theano wasn’t well but no one would listen to me.’

Mrs Zahorszki added that over the course of seeking help, she noticed a distinct change in her previously fit and active daughter.

‘Every time I went to see a doctor I asked for bloods to be taken. I knew there was something wrong because her whole personality had changed,’ she said.

‘She was wanting cuddles all the time and not running any more. Before she was ill she was a very active child. She had a lot of friends. She had also started having tantrums.

‘I was asking for her to be sent to a paediatric clinic to check why she was ill all the time.

‘But the GP told me she was normal. He said if there was no change he would consider referring her in January.

‘Then she started getting new symptoms including a pain in her leg. We were told at the first to hospital it was soft tissue damage and then we were told it was a kind of infant arthritis. 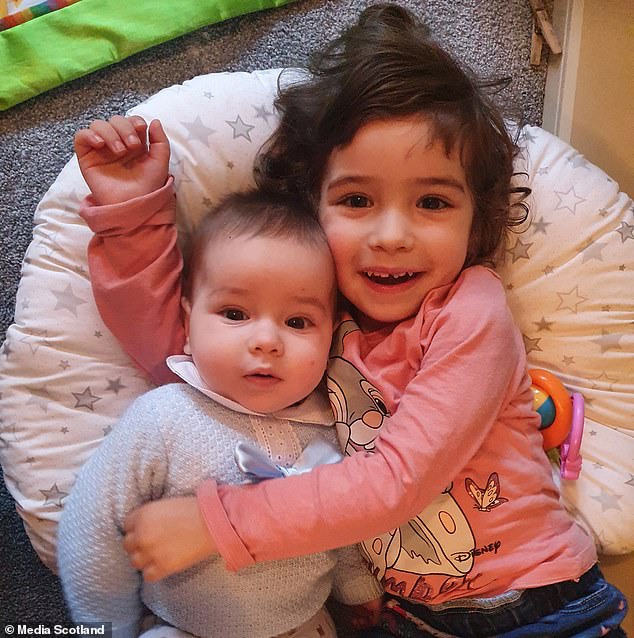 Medics say that Theano now has a good chance of survival now that she has started chemotherapy but her parents are warning others not to allow their instincts to be dismissed by medics. Here Theano is pictured before she became ill alongside her brother Alexander 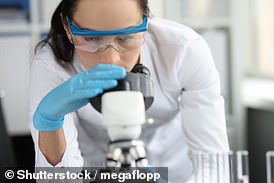 12 paediatric ECMCs across the UK are set to receive a £2.2million funding boost from the charity Cancer Research UK, the National Institute for Health and Care Research and the Little Princess Trust

‘We were sent home with Calpol and Nurofen but they never checked any bloods.’

The family said by mid-November, little Theano could hardly walk and by December, she was too ill to go to nursery.

Mrs Zahorszki added: ‘She started getting belly pain. She became constipated and was complaining about the pain. She cried all day and her leg was still hurting.’

That month her parents once again took Theano to University Hospital Wishaw, part of NHS Lanarkshire.

But she said the doctor simply gave her laxatives and sent the family on their way.

Mr Zahorszki, a delivery driver, once again asked for blood tests to be done but was told: ‘She doesn’t need blood tests, she’s just constipated.’

Theano’s condition continued to deteriorate until December 31, with the young child continuously screaming and crying in pain.

Taking her to hospital, the family waited five hours to be seen.

It was at this point the couple decided if medics, once again, refused to do blood tests they would take Theano to one of their home countries to have the tests carried out there.

But medics agreed to carry out the blood tests and then told the devastated family their daughter was ‘very ill’.

Further analysis of the results revealed Theano had leukaemia, with 81 per cent of the blood cells in her bone marrow affected.

Mrs Zahorszki said medics told her the cancer had probably started back in August.

‘The doctor told me her leukaemia had probably started three or four months ago – when all the colds and infections had started,’ she said.

‘But the last eight weeks she went so downhill and nobody did anything.’

Doctors have said Theano has a ‘very good chance’ of survival, but Mrs Zahorszki added: ‘One doctor told me she would only have had a month or two if I hadn’t come in when I did.’

She said she wanted to speak about her experience to warn other parents.

‘I just want to say to other mums that when they feel something is wrong they have to keep telling their doctor,’ she said.

‘We regret any instance where someone feels we have failed to provide the highest standard of care.

‘We would encourage anyone to contact our patient affairs team if they wish to raise any concerns to allow them to be fully investigated.’

There are multiple types of leukaemia, which have different prognosis, and it is not clear what form of the disease Theano has.

Across all types there are nearly 10,000 cases of leukaemia diagnosed in the UK each year, with almost 5,000 fatalities.

Only about 40 per cent of people diagnosed with a type of leukaemia survive 10-years after their diagnosis, but individual survival rates vary by sub-type of cancer.