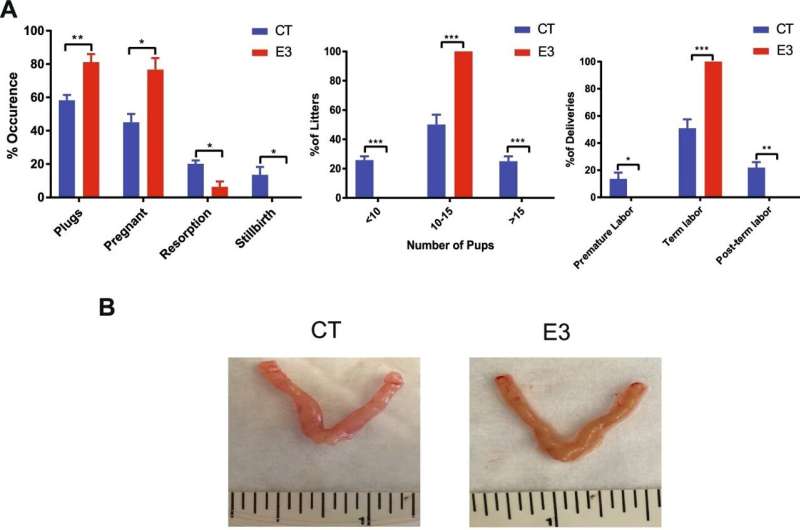 When a woman becomes pregnant, her levels of estriol, one of the three common estrogens that are nearly undetectable before conception, skyrocket. However, scientists never knew what this hormone does or why levels of it build as they do.

Many researchers previously believed that this so-called “weak estrogen” was only a waste product or non-functional hormone. Now, Yale researchers have discovered that estriol plays an extremely important role that shapes the future of offspring. The team, including senior author Hugh S. Taylor, MD, chair and Anita O’Keeffe Young Professor of Obstetrics, Gynecology & Reproductive Sciences and professor of molecular, cellular & developmental biology; and research assistant and first author Yuping Zhou, published their findings in BMC Biology on May 2.

“We identified, for the first time, the function of one of the most abundant hormones in pregnancy,” says Taylor.

The three main estrogens in mammals are estrone, estradiol, and estriol. Estrone, or E1, is a weak estrogen that rises after menopause. Estradiol, E2, was long thought by scientists to be the “workhorse” of the three and most biologically active. Estriol, E3, the “weakest” of the three, has the highest concentration of any estrogen during pregnancy, and has been used by clinicians as a way to assess fetal well-being, but scientists have long dismissed it as insignificant.

“Humans and some other primates evolved a complex pathway of estriol production that’s not seen in most animals,” Taylor says. “It was made specifically in pregnancy for a particular function that nobody knew about until now.”

In their new study, the team used estriol to treat pregnant mice, which don’t naturally produce the hormone, to better understand its role in reproduction. They then looked at how its administration impacted the offspring’s brain and uterus—two organs in mice that have evolved significantly in primates. They found that estriol led to improvements in factors including pregnancy rate, litter size, success of pregnancy, and uterus structure. Offspring also showed less anxiety and greater exploratory behavior.

Next, the team looked for changes in gene expression when the baby mice reached adulthood that may explain these improvements. That generation’s offspring revealed many genes that were differentially expressed as a result of the procedure. “These mice were exposed as a fetus when their mom was pregnant,” says Taylor. “We saw permanent changes in gene expression that remained long after the exposure was done.”

The study also uncovered the mechanism through which estriol triggers epigenetic change. In contrast to estradiol, the binding of estriol to estrogen receptors on proteins tweaks it into a shape that allows it to bind to epigenetic modifiers, which in turn affects its binding to target genes. It is paradoxically a very strong estrogen when one looks at this novel estrogen action.

“Estriol programs reproductive potential and brain function through epigenetic modification,” says Taylor. “It does this by allowing the estrogen receptor to bind with new binding partners that are epigenetic modifiers.” The finding raises the fascinating possibility that if doing so is found to be safe, adding estriol at some point during human pregnancies might become a way to make those pregnancies safer and less prone to complications.

The effects of ‘weak estrogens’ in plastics

In 2012, the U.S. Food and Drug Administration (FDA) banned the use of bisphenol A (BPA) in baby bottles and sippy cups. BPA, which is still found in many hard plastics, is a kind of “environmental estrogen,” or endocrine disrupter, a synthetic compound that has weak estrogen-like activity. “People would argue in favor of BPA saying, “This is a weak estrogen. It’s nowhere near the potency of estradiol, so it couldn’t possibly have any effect,'” says Taylor. “In reality, bisphenol A works through the same mechanism that estriol does and can interfere with the normal functions of estriol.”

This research highlights how environmental estrogens like BPA may have the capacity to induce epigenetic programming changes in humans through a mechanism similar to estriol’s. So while BPA, like estriol, has often been dismissed as “weak,” it may still capable of having profound biological effects.