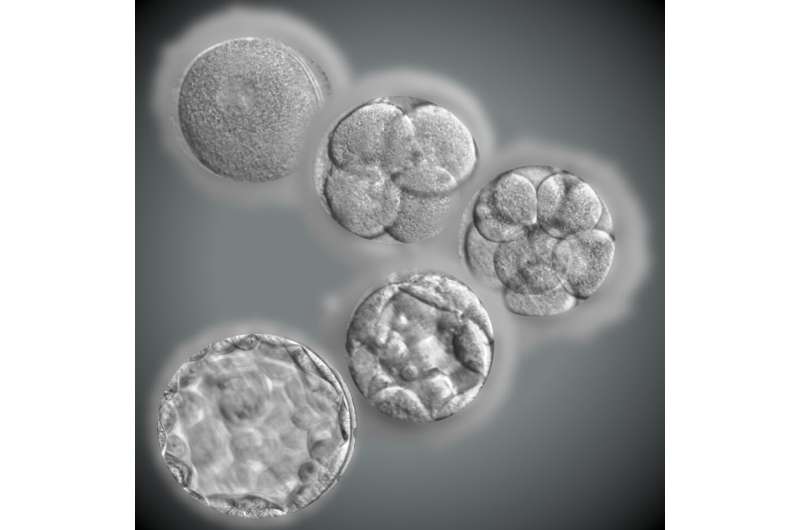 Why do two-thirds of in vitro fertilization (IVF) embryos go into developmental arrest? A new study publishing June 30th in the open-access journal PLOS Biology by Andrew Hutchins of Southern University of Science and Technology in Shenzhen, China; Guoqing Tong of Shuguang Hospital in Shanghai, China; and colleagues shows that many embryos stored for IVF undergo characteristic genetic and metabolic changes that inhibit development. These results help explain the loss of developmental ability of many harvested embryos, and may point to strategies for increasing the proportion of developmentally competent embryos.

Only about 30% of IVF embryos progress as far as the blastocyst stage, the round ball of cells that begins to form the cell layers that will ultimately develop into tissues and organs. There have been multiple hypotheses to explain this arrest of development, but no single explanation has been fully supported by experiment. Animal models have offered only partial insights into the human situation because in many other species a much higher proportion of externally fertilized eggs succeed in developing.

To understand the inability of so many human embryos to progress, the authors examined gene expression in arrested embryos. They found that a proportion of embryos (dubbed Type 1) fail to make the transition from using stored maternal gene transcripts to activating the embryo’s own genome. This group was distinguished from two other groups (Types 2 and 3), in which this transition occurred successfully, but which displayed downregulation of multiple genes important for the dynamic events of early development. These notably included reduced activity of genes encoding nucleosomes (proteins that organize DNA) and ribosomes (molecular factories that synthesize proteins), as well as factors critical for regulating cell division.

Such changes are characteristic of cells that enter quiescence, a temporary state, and senescence, a permanent loss of dividing capacity. Embryos of both types 2 and 3 displayed low levels of glycolysis—a key energy-production set of reactions—but differed in the level of oxidative phosphorylation, another energy-producing system. When the authors treated these embryos with resveratrol, a small molecule that (among other effects) activates a set of metabolism-regulating enzymes, over half of the arrested embryos recommenced development, but fewer than 10% made it as far as the blastocyst stage.

“Our results indicate that many IVF embryos enter a senescent-like state,” Hutchins said, “in which changes in metabolism and gene expression prevent developmental progression. It appears to be possible to overcome this arrested state for some embryos, but much more work will be needed to determine the best strategy for doing so.”