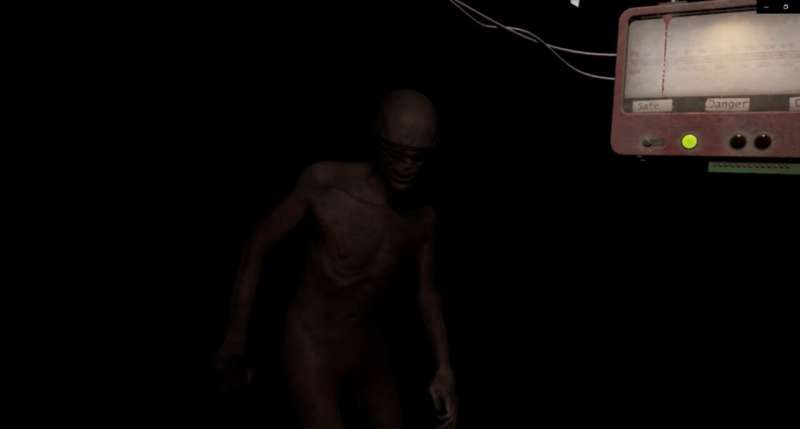 In 2017, Ninja Theory, advised by Cambridge academic Professor Paul Fletcher, took the gaming world by storm with Hellblade, which accurately depicted psychosis. Now the company has teamed up with one of Fletcher’s Ph.D. students to see whether gaming might help improve people’s mental health.

Something is very badly wrong.

I had been gently drifting along the river, the sun gently setting and the sky a warming golden hue. As I slowly breathed in and out, my body had relaxed, my heart rate calmed.

But now, I have awoken in a dimly-lit basement, water dripping from the ceiling, the light fizzing on and off. I can hear screams from the neighboring room. As I try to move, I realize my hands are strapped to a chair.

And there is someone—or something—in the room with me.

Ten minutes later, I emerge safely from the dungeon, blinking in the daylight that spills through the window of Lucie Daniel-Watanabe’s “laboratory.”

What I have just experienced was, thankfully, not real—it was virtual reality (VR). It is part of a unique collaboration between University of Cambridge researchers and local gaming company Ninja Theory. Daniel-Watanabe is a Ph.D. student under the supervision of Paul Fletcher, a professor of psychiatry.

Fletcher became involved with Ninja Theory back in 2013, when the company approached him to be an advisor on their game Hellblade, whose main character Senua experiences psychosis. The developers wanted to ensure that the representation of this condition was both accurate and sensitive. It paid off: the game won multiple awards, including five gaming BAFTAS, but more importantly it was praised by people who experience psychosis themselves.

Ninja Theory has since gone on to be acquired by Microsoft as part of Microsoft Studios (now known as Xbox Game Studios). It has moved headquarters to a new building in Cambridge, on the ground floor of which sits its “gaming bar” The Bird or Worm?

The company has continued its collaboration with Fletcher and is now funding Daniel-Watanabe’s Ph.D. Yet despite this, she admits she would not describe herself as a hard-core gamer.

“My partner is an avid gamer and my closest friends are avid gamers, so it’s always been kind of a part of my life. I game irregularly because I study too much!”

Daniel-Watanabe was working as a research assistant with Fletcher when he first started talking about this current project. “It was just serendipity. I was in the right place at the right time.”

Whereas Hellblade was about representing a mental health condition as accurately as possible, Daniel-Watanabe’s work is moving beyond just representation, looking at whether gaming can help improve our mental well-being, with a specific focus on anxiety.

“Anxiety is interesting because it’s something that occurs in everyone.”

“It’s not just anxiety disorders that have high levels of anxiety: almost every mental health disorder has an aspect of anxiety in it, or it’s very common at least—it goes across diagnoses.”

She has been using virtual reality (VR) technology to examine how we respond to stress. She has recently completed a study that involved putting people in a number of different stressful virtual situations—such as confronted by spiders, in a forest at night, on top of a high building or speaking in public—and measuring changes in their breathing, heart rate and pulse. This pilot study was aimed at showing a proof of principle, that it is possible to cause—and measure—physiological changes. She hopes to make these available at some point to other research groups, so that they can replicate the findings or use the technology to conduct their own experiments.

Daniel-Watanabe is now looking at whether we can be trained to take control of these changes, to calm ourselves down and reduce our anxiety levels.

Which is where we began.

With the VR headset in place and a pulse oximeter attached to your finger, you are ready to delve into the virtual world that Daniel-Watanabe and the team at Ninja Theory have created.

The training takes place in two stages. To begin with, you find yourself in a rowing boat, drifting along an estuary. A voice guides you to breathe in for five seconds, hold for five seconds, and breathe out for five seconds, repeating over five minutes while a soothing, New Age soundtrack lulls you into a feeling of serenity. The technique would not feel out of place in a mindfulness class or on a relaxation app.

You are very unlikely to find the next step in your mindfulness class, however.

And when she says stressful, she is not kidding.

“You’re here in a dungeon with a monster wandering around, but the monster can’t see, it can only hear you.”

This piece of good news is short-lived.

“The only thing it can hear is your heartbeat. There’s a little dial in the top corner of [your vision] that has a green and amber or red light, and the closer you keep your heart rate to the baseline—that’s what it was when you were on the boat—the light will stay green. But if it increases by however many beats per minute, it’ll turn to amber, then if it increases again, it’ll go red and that shows how much danger you’re in from the monster.”

Having played such classic PlayStation horror games as Resident Evil IV, I’m not unfamiliar with being terrified by monsters, but in that instance (a) I was not playing in virtual reality, where your sound and vision are completely immersed in the game; and (b) I could run away every time I heard the chanting of rabid monks approaching.

Here, however, as a mutilated creature crawls up so close that you can almost feel its breath on your face, your only defense is to remain calm. This is not easy: at one point, I make the mistake of looking to my right and realize that in the room next to me someone is also strapped to the chair and (Spoilers!) theirs is not a happy ending.

Fortunately, I do live to tell the tale. In fact, despite feeling at times that I could hear my own heartbeat, I manage to do surprisingly well. A couple of times, the light trips briefly to amber, but according to Daniel-Watanabe my heart rate only ever increases by around ten beats per minute.

So far, around two dozen people have taken part in the experiment, with Daniel-Watanabe aiming to test up to 100 people. As well as the virtual reality experience, each participant completes a detailed questionnaire that will allow her to see where there are particular traits or experiences that make a person better able to cope. Are people who are more anxious, worse at this task, or do they perform better, for example? Are horror fans or hard-core gamers less likely to be terrified and therefore remain calmer?

But the partnership with Ninja Theory potentially takes Daniel-Watanabe’s work to another level.

First off is the quality of the experience. Researchers may be experts in their field, but limited resources mean that the virtual reality environments they employ tend to be relatively simple and unrealistic.

“Everything is done by academics, which is how academia kind of works, but often means that you get a slightly less optimal thing than you would if you had someone who specialized [in VR technology].”

The graphics in Daniel-Watanabe’s experiment may not be quite as sophisticated as those in Hellblade—which were stunningly beautiful—but they are not far off.

Second is the application.

“With mindfulness and a lot of these meditative apps, there’s no incentives, there’s no drive. You have to be self-motivated enough to want to do them. Gaming has that intrinsic motivation built into it.”

In other words, by building these techniques into a game, people will want to take part. But even if her work doesn’t lead to the full “gamification” of mindfulness counseling, as she says: “[We will have] created a cool breathing exercise that you can do in VR.”

In the future, she hopes that games that employ this approach—whether using VR or a tablet—might be rolled out to clinics, GP surgeries or pre-surgery, where people get very anxious, so that people can have fun while learning valuable relaxing exercises.

While her work is still at a very early stage, she has received some very encouraging feedback. “One of our [participants] sent me some feedback saying that she had had a really rough weekend and she was getting very anxious, and she remembered the breathing techniques that she learned on the boat. She tried to use them again and was able to calm herself down, which was kind of unexpected because we weren’t expecting this to be actually useful to anyone [yet].”

Daniel-Watanabe has now put around fifty volunteers through her trial and has begun analyzing the data to see if it has been successful. Her next step is to expand the trial, tweaking the training. For this, she will be looking to recruit subjects from different backgrounds and experiences, not just those who are familiar with the worlds of gaming and VR.